If We're Looking into Allen Robinson's Future, a Tag Sure Seems More Likely Than a Trade Skip to content 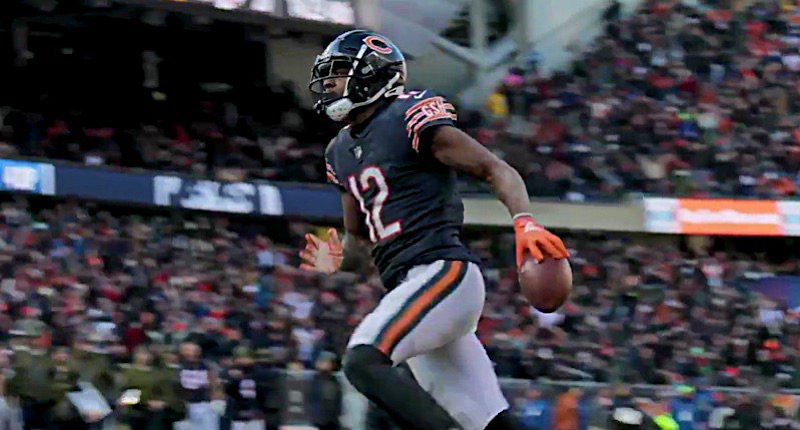 Between his play on the field and contributions off it, Bears receiver Allen Robinson deserves what should be coming to him — a deal that rewards the team’s best offensive player and keeps him in Chicago for a while. But let’s face it. There’s only so much I can write about a Robinson extension. That said, I’d rather drum up a vastly different conclusion to his time in Chicago than even beginning to entertain the idea of trading him. Alas, the universe has forced our hands.

Over at Pro Football Focus, Andrew Erickson cites Robinson not getting an extension offer to this point as a reason the Bears would consider a trade, a move that could potentially be accelerated by a slow start to the season. But because this concept is presented through the lens of fantasy football, it lacks the necessary context to properly tackle the topic. Because, with all due respect to Anthony Miller’s target share, there are other things to focus on when throwing out the idea of Chicago trading its best offensive player.

For example, GM Ryan Pace’s history of signing priority pending free agents to extensions isn’t mentioned. Look no further than Akiem Hicks, Eddie Goldman, and Cody Whitehair. Like Robinson now, those players entered August without extensions on the table. Further, there is no rush to get a deal done. Neither side has publicly set a deadline. Both parties seem interested in keeping a good thing going. That one isn’t done now shouldn’t be a springboard into predicting a trade in the future.

And if all else fails, the Bears could ultimately wield the Franchise Tag next offseason.

No, that’s not the most ideal scenario. But that is a lever Chicago can choose to pull if necessary.

The Bears haven’t used the Franchise Tag since 2016, doing so to retain Alshon Jeffery, keeping him around on a one-year deal that paid him $14.599 million in 2016.

In case you’re unaware, Franchise Tag numbers are based on the top five salaries at a player’s position. The 2020 Franchise Tag, for example, would pay a receiver like Robinson $17.865 million. So should the Bears resort to that path, $17.865 million represents a baseline number for the sake of discussion.

NOTE: The Transition Tag (which is based on the top-10 salaries at a player’s position, but allows a player to explore options elsewhere) is an alternative. But while it worked with Kyle Fuller, slapping Robinson with the Transition tag feels a bit riskier, given his potential upside with even better QBs throughout the league.

Agreeing on a deal at some point could allow for the Bears to keep Robinson’s salary cap number lower in 2021. And while that’s not top of mind, it’s part of the equation. Flexibility would be welcome with next year’s cap projected to shrink to as low as $175 million. But more important than that might be the message an extension sends.

Players like getting paid. And in-house promotions tend to spark good-will among those in the locker room. That spreads to fans, who in turn, enjoy seeing their favorite players (especially the productive ones) stick around. And I imagine front offices like the vindication of hitting a home run in free agency, then keeping the player around for a second contract. All things considered, a Robinson extension would be good for all parties who partake in the Chicago Bears experience. Those types of deals tend to be rare.

Getting a long-term deal done makes sense. Preferably well before a time comes for us to entertain the idea of trading Robinson.