Defense Itches to Hit, Where McCown is Better Than Brady, and Other Bears Bullets Skip to content 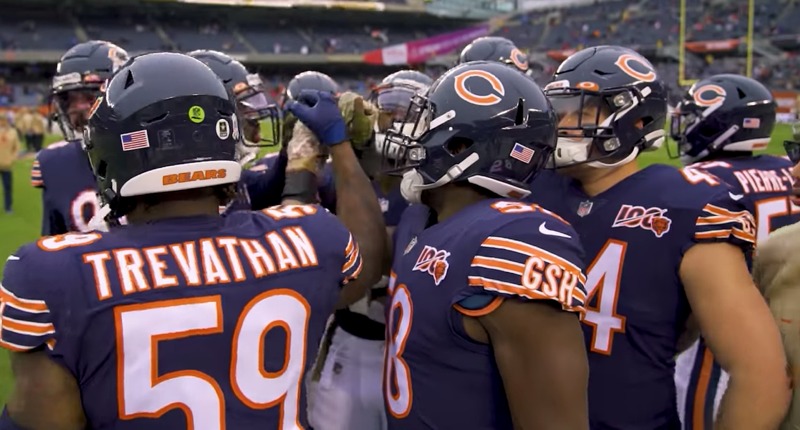 Last night’s test run with the projector screen in the back yard went as well as I could have possible imagined. I watched baseball, a Taylor Swift concert, and Star Wars. This could be the new norm for Friday fun in socially distant times. We’re onto movie night later, with our feature presentation being 10 Things I Hate About You.

By the way, if you want to get the same projector I have, you can get it from Amazon for just $100. And if you buy through our link, you’ll be supporting Bleacher Nation in the process.

Quote of the day from Danny Trevathan on the urge to have an actual PRACTICE soon: "We haven’t had it. So guys are kind of like fiending for it, scratching their neck to go outside. All this walk-through stuff? It’s necessary, but it’s slow. It’s not real football."

Bears LB Danny Trevathan: "I was just getting started (in 2019, pre-injury). … I’m being serious. I was just touching the tip of the ‘berg. … How do I get back to that? I never lost it, in my mind and how I feel. How I’m showing right now, I never lost it."

•   You already knew the Bears defense wants to get back at it again. Three years running as a top-10 scoring and yardage defense. Back-to-back years as a top-tier group according to Football Outsiders’ DVOA rankings. Elite playmakers at all three levels. I’ll admit to my biases, but I don’t think there is a more exciting defensive unit in the game. The offense is another story. And we’ll talk about that group in due time. But I can’t help but dream big when thinking about the “D” in 2020.

•   All things considered, I’m not sure there is a player itching for real football more than Trevathan. The guy is a ball of fire, passion, guts, and intensity who happens to put on pads and a helmet every Sunday. Trevathan was in the midst of another solid campaign with the Bears before an elbow injury in November essentially shut him down for the rest of the season. Chicago was able to fill his spot with the Kevin Pierre-Louis/Nick Kwiatkoski tandem, but even then … the defense wasn’t the same. There is something about how Trevathan plays that really ties the group together.

•   Or maybe it’s nostalgia hitting me? After all, Trevathan was the first free agent with a profile to buy into what GM Ryan Pace was rebuilding. And when Trevathan signed to re-unite with John Fox, it gave the Bears (and their defense) creditability it didn’t have while Mel Tucker was running the group. No matter what happens moving forward, Bears fans should have a soft spot for Trevathan.

•   Practice clips bring a brief sense of normalcy to what is already an odd August:

•   They don’t make ’em like Jim McMahon any more:

“He was a 1980s John Hughes movie antagonist looking dude. He looked like a bad guy in one of those movies with the headband, that jaw, with his Ray-bans on. You knew there was going to be a Bud in his hand the second the game finished.”

•   Comic books, toys, tools, and body scrubs are among the Deals of the Day at Amazon. #ad

•   Ex-Bears QB Josh McCown reveals one way in which he is better than the greatest to ever do it:

We are thrilled to announce our third feature documentary will be "MAD MAC: THE MEMORY OF @JimMcMahon" — one of the biggest talents /personalities the NFL has ever seen!

The 49ers have signed former Bills OL Spencer Long, per his agent @JLSports3. Some interior depth and versatility.

•   ICYMI: MACtion has been canceled.

•   Elsewhere on the college football scene, Todd Hefferman of The Southern writes the Missouri Valley Football Conference voted to postpone conference play to the spring. The FCS conference’s teams will still try to play non-conference games during the fall. Although, I’m uncertain how that will all work out.

•   My alma mater (SIU) plays in the MVFC, but that’s not why that nugget made Bullets. NFL fans (and scouts … and talent evaluators) figured to have their eyes on The Valley to watch North Dakota State quarterback Trey Lance. As a redshirt freshman, Lance threw 28 touchdowns (with no interceptions!) and added 14 more ground scored to go along with more than 1,000 rushing yards. A true multi-threat QB, Lance projects to be one of the first three signal callers off the board in the 2021 NFL Draft. One draft pundit believes Lance could even be the best prospect in his class.

•   Washington’s football team didn’t waste much time in cutting run-in back Derrius Guice after he was arrested on domestic violence charges: