Patterson Runs with the Backs, Nichols is Ready, Air Leno, New MNF Crew, and Other Bears Bullets Skip to content 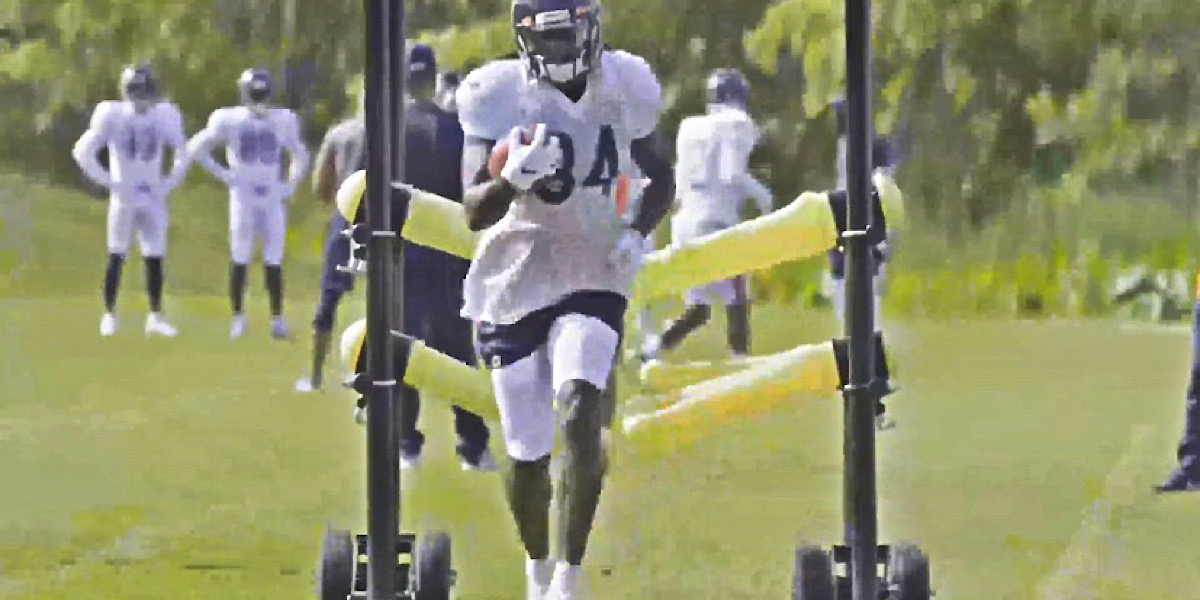 I’m just saying that the Fernando Tatis Jr. situation wouldn’t be a thing had we taken my suggestion for a players-run league more seriously.

•   Nothing ushers in the start of a new football year like a position change:

Cordarrelle Patterson played some running back and WR on Monday. “We want to be able to get the most out of him,” Matt Nagy said. pic.twitter.com/0GqrthfFIl

•   We wrote about Patterson spending time with the running backs during meeting rooms late last week. And on Monday, Bears Head Coach Matt Nagy confirmed Patterson was set to get some burn with the running backs. This isn’t a move to take lightly. The Bears need help in the backfield. Because no matter how much I like David Montgomery and Tarik Cohen, the depth behind that pair is lacking. Additionally, we’ve seen Patterson perform well playing as a running back. Most importantly, we have years of tape that shows us Patterson is dynamic with the ball in his hands. Patterson has great field vision, speed, power, juke moves, and a hard-to-tackle body. Why wouldn’t you want to get that guy more touches?

The funny thing about Cordarrelle Patterson is that he's actually a running back pic.twitter.com/G9ueiBduGU

CORDY THE RUNNING BACK! Cordarrelle Patterson is running people over into the end zone! #Patriots touchdown! #GBvsNE pic.twitter.com/enhWpZv7di

•   There are times when football is a complicated game. This isn’t one of them. Give the ball to your playmakers and get the heck out of the way. If you have to be creative to do so, then do it. And if that means giving an All-Pro kick returner running back snaps, and it has a history of working, then there should be no hesitation. Whatever it takes for this offense to get going needs to be done. Otherwise, we’re going to spend another winter bemoaning how Chicago wasted another year of elite defensive play because of an offense that wasn’t creative enough to do something worthwhile.

•   Don’t get me wrong. I want to see David Montgomery take over as the load-carrying back. And there’s still room for him to do that. I also want to see Tarik Cohen put up big numbers in a contract year. But more than that, I want to see the Bears offense give opposing defenses fits. Imagine how defenses would have to react when Patterson, Cohen, and Montgomery were on the field at the same time because they were all a threat to get the ball. Versatility was lacking last year. And because I don’t want the Bears to make the same mistake twice, I’m welcoming this position change with open arms.

•   This thread goes inside why giving Patterson running back snaps makes more sense than some might otherwise think:

All offseason there have been hints and clues to unravel that would suggest they're moving to a heavier outside zone based scheme. Cordarrelle Patterson moving to RB full time just about confirms what I've speculated.

•   If you watch the Bears’ training camp highlights clip closely, you’ll see Patterson in running back drills (among other things).

•   Speaking of position changes, it looks like Bilal Nichols is getting the first crack at replacing nose tackle Eddie Goldman. Nichols isn’t the prototypical nose tackle. However, his speed/quickness inside could give interior offensive linemen fits. And just because a guy doesn’t look the part doesn’t mean he can’t play it. So because Nichols has played some snaps at the position, I’m willing to see this experiment through.

•   And for what it’s worth, so is Nichols. “(Goldman’s) gonna be missed,” Nichols said (via ChicagoBears.com). “but I’m ready to step up. I’ve trained hard. I’m ready for this opportunity. I’m ready to just showcase what I can do, and you know, just put my best foot forward.” The sky is the limit when you can team up confidence and talent.

•   I like Nichols, and believe he’s flashed some real upside. But not having Eddie Goldman stinks. Goldman is an underrated player who deserves love for the things he does in the middle of the defense. However, I won’t spend all summer moping about not having him in the lineup. In fact, thinking about Akiem Hicks being back brings me joy:

In Weeks 1-3 last season, the Bears averaged 18.7 pressures per game (via @Sportradar).

In the nine games from the time Akiem Hicks got hurt in London in Week 5 thru Week 14? 8.7.

Story on No. 96 entering his ninth NFL season and fifth as a Bear https://t.co/JDNN1WZYTp

•   Hicks and Nichols teaming up at the line of scrimmage gives me special feelings:

Akiem Hicks has plenty of belief in Bilal Nichols as the Bears' nose tackle this season: "He's shown promise for his first couple years. We look forward to him taking the next progression, the next step forward, and getting another position down."

•   If Charles Leno Jr. plays as good as these Jordan 1s look, then a Pro Bowl year for the Bears left tackle is on the horizon:

A rookie mistake today for TE Cole Kmet. He had a false start in drills and his teammates let him hear about it. #Bears

•   An ex-Bears QB has landed a national television analyst gig. It’s just not the one you expected:

•   Part of me wishes Cam Newton was bringing this type of energy to Bears camp:

•   At least one early season Bears road game will be played without fans in the stands:

Falcons officials originally prepared to host 10,000-20,000 fans but said from the beginning that could change. Besides no fans at Sept. 13 game with Seahawks and Sept 27 vs Bears, Falcons won’t have fans at Oct. 5 road game at Green Bay, as announced by Packers

•   The Bears aren’t scheduled to play in Nashville until November. And yet, I suppose it’s worth keeping tabs on this situation knowing that the Bears and Titans play later this year:

No fans at Nissan Stadium for Titans and @NashvilleSC games at least through August and September, @JohnCooper4Nash says

•   Ninja Foodi, noise-cancelling headphones, tools, and more are your Deals of the Day today at Amazon. #ad