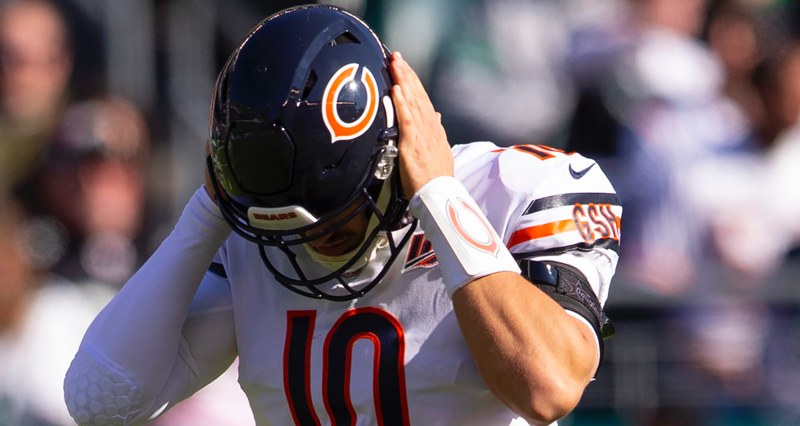 Following the Bears’ quarterback competition through the eyes of the beat reporters is going to be a treat. And that’s all we’ve got, because we won’t be getting eyes on as outsiders.

Different perspectives and ideas are going to flood social and traditional media alike. Moreover, they will paint how we discuss the big-picture in the days and weeks leading up to when the time comes for the team to make a decision. And because of there are many points of view, I feel as if we’re bound to get reports that might conflict with each other.

For instance, this review from Hub Arkush regarding how Mitchell Trubisky looks is encouraging:

"To my eye, Trubisky has been much sharper, more accurate and more convicted in his decision-making than Foles has in the early going."

There's a long way to go, but Mitch Trubisky has the early lead in the #Bears QB battle, @Hub_Arkush writes.https://t.co/qNyB1tdP2I

There’s plenty to like about what early reports are relaying regarding Trubisky’s game. After working out with quarterback guru Jeff Christensen, Trubisky’s footwork seems to be in a better place than it has been previously. And that he is throwing with more conviction and accuracy is certainly promising. Admittedly, the bar should be higher for a player who was the first quarterback taken in his draft class, and who is entering his fourth year. However, we can’t play with cards we weren’t dealt — and neither can the Bears.

Refined mechanic and improved accuracy is helpful for Trubisky as he looks to hold off newcomer Nick Foles. HOWEVER, this is not:

Matt Nagy on this play: “Those are critical errors that we cannot have…” #Bears

How is this a lesson Trubisky is still receiving in his FOURTH training camp?

At my core, I do my best to not overreact at training camp things. Sometimes, I’m good at it. Other times, not so much. But this, knowing that we’ve seen Trubisky do it in games, grinds my gears. Head Coach Matt Nagy stresses the importance of not making the same mistakes repeatedly. And yet, Trubisky made a mistake he has made before. What’s worse is that it happened in practice. There’s no harm in trying to make a play with a throw down the field in coverage, because it’s practice. Theoretical points in the quarterback derby won’t be knocked off the scorecard because you threw a ball away, because it’s practice. We’re talking about practice. If ever there was to make an error on a throw, this is it!

That Trubisky is making these types of errors in YEAR FOUR while in a competition that figures to weigh decision-making heavily into the equation absolutely chaps my behind.

You’re in a competition, Mitchell. Try to make a play, for crying out loud, or at least yield in the right way!

I want to take solace in Nagy telling Trubisky (via Adam Hoge): “You gotta throw the ball away … We told him that. He’s not going to do that again.” But Trubisky has done it before. And I imagine this isn’t the first time they’ve told him this. Ugh. Maybe this is why I have trust issues.

All things considered, I’m willing to deal with Trubisky’s growing pains and learning curve in this battle. It comes with the territory. And any signs of progress and improvement are welcome. That reporters are seeing tangible growth from Trubisky counts as a positive takeaway. As do reports he continues to be strong in practice. Let’s not lose sight of that.

In the end, I’m not rooting for one quarterback over another. I want the quarterback who gives the Bears the best chance to win right now the opportunity to start 16 games. Let the best man win.