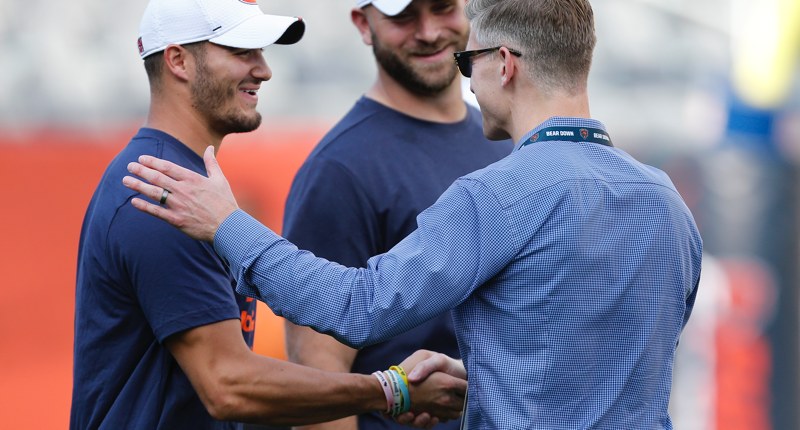 I don’t always agree with his decisions, but I can still admire Ryan Pace’s optimism.

Because if I were Pace, I’d feel good coming into the 2020 season, too.

The Bears still have a Super Bowl caliber defense – a group that features three Pro Bowl defenders and others who could conceivably make the jump. On the other side of the ball, they have a new-look tight ends room, with a hungry veteran and a rookie with tons of upside at the top of the depth chart, as well as a new coach to guide them. And while the quarterback competition is still undecided, that there is a competition brings a certain buzz. Bringing it all together is Matt Nagy, who was the NFL’s Coach of the Year two seasons ago.

And yet, Pace admits to feeling some heat entering this season:

Bears GM Ryan Pace: "I know the pressure and scrutiny we’re under and I don’t dodge that. If you’re in this, you better embrace that and have confidence in what you do and remain confident in the people you’ve surrounded yourself with.”

By now, we have established Pace isn’t directly on the hot seat (yet). But there is still pressure. It’s a fine line to walk, but it exists.

Because while he whiffed on drafting the right quarterback and his offseason process for finding a quarterback to push/replace Mitchell Trubisky is questionable, Pace has done enough notable good things as a GM. And it would be unfair to turn a blind eye to the positives (even if the negatives are an absolute gut-punch).

Pace led the effort to refurbish and modernize Halas Hall. I know that’s off the field, but it counts. On it, we have witnessed Pace piece together a Super Bowl caliber defense. And while the jury is still out (for some) regarding the Nagy hire, he deserves credit for navigating the minefield of 2019 without losing that locker room. Remember when Bears receivers were unhappy with Trubisky? Because that was a thing, albeit not for long. That it didn’t become a bigger thing is a credit to the head coach. And after seeing how easily it was for Marc Trestman to lose the locker room, I have a newfound appreciation for a coach who keeps it together.

Even still … here we are circling Pace’s own admission that there’s pressure going into the season. And he’s not wrong to feel it. Let’s face it. You don’t need much of an imagination to envision a scenario in which the Bears clean house at year’s end. Because if the quarterback play battle fails to develop a suitable option, a rebuild tight ends room falters, and the defense doesn’t play at a top-10 level, the temp on the hot seat will get turned up.