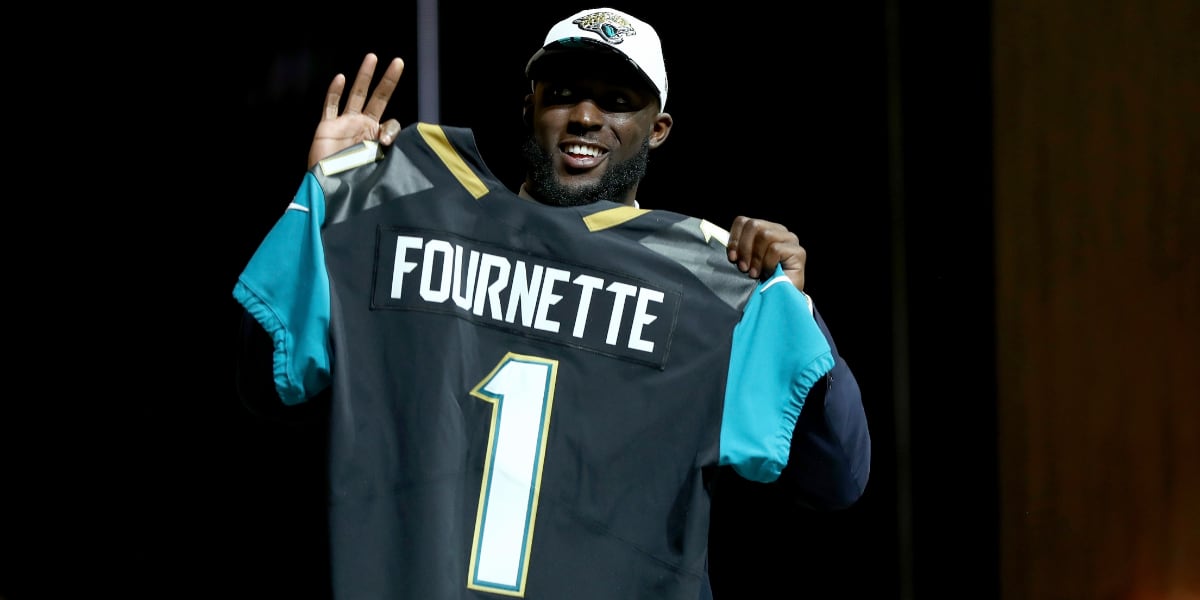 While Brett handles MLB’s trade deadline over at BN Cubs, yours truly pulled off a rather large (fantasy) baseball trade of his own last night. Prior to my league’s deadline, I sent Nick Castellanos, Spencer Howard, Nate Pearson, Dylan Cease, and a second-round pick for Aaron Nola, Taijuan Walker, Kyle Seager, Sean Manaea, and a fifth-rounder. That’s a lot of names going both ways. And I realize I’m giving up a ton of potential. But I’m in first place and I think Aaron Nola gets me closer to a championship. Trader Lu is in it to win it, baby!

•   It’s nice to see another team get drilled for passing up the opportunity to draft Deshaun Watson or Patrick Mahomes:

and instead drafted a RB named Leonard Fournette…

because they wanted to see what they had…

•   I hope the Bears can take advantage of the Jaguars’ ineptitude and come up with a December win for a team that’s clearly #TankingForTrevor.

•   Even with their draft whiffs, the Jaguars were on the cusp of greatness with the right quarterback. Teaming a developing defense with a quarterback who could sling it could have been a game-changer in the AFC South. Instead, it was a division rival (Texans) getting Watson and a conference foe (Chiefs) landing Mahomes. As a Bears fan, I realize I don’t have too much room to talk. But I can take some solace in facing Mahomes and Watson once every four years. That neither of those quarterbacks is in the Bears’ conference is a blessing.

•   In that vein, sometimes I think about how different the last Super Bowl would have been had the 49ers drafted Mahomes instead of Solomon Thomas. In a twisted way, not drafting Mahomes cost San Francisco a Super Bowl. Tough break. Imagine how different the NFL landscape would have been had the 49ers drafted Mahomes or Watson. Sure, they ultimately landed Jimmy Garoppolo. But Watson and Mahomes are both on a tier above Garoppolo, and their presence could have shifted the power balance in the NFC. Don’t get me wrong. The 49ers are still part of the conference’s upper-crust. But Mahomes and Watson are quarterbacks you win because they’re on your team. Certified game-changers.

•   Meanwhile, the Bears are stuck deciding between a first-round pick who hasn’t panned out and a journeyman who’s had hot streaks in the postseason. It’s not the best situation to be in. And to make things all the more unnecessarily interesting, they’re not announcing their QB1 until right before the game. Well, at least that’s what the plan is for now. I’ll bet a dollar to a donut that a national reporter (Schefter? Glazer? Pelissero? Rapoport?) scoops that by Wednesday of game week.

•   No matter who’s under center in Week 1, the Bears and Lions will be treated to a new broadcast team:

Kenny Albert and FOX newcomer Jonathan Vilma will have the call for #Bears at #Lions on Sept. 13. Shannon Spake is the reporter on the game.

•   As for the rest of the roster, JJ Stankevitz (NBC Sports Chicago) and Hub Arkush (Pro Football Weekly) have updated their latest projected season-opening 53-man squads.

•   An old friend is looking for work:

The #Raiders have released CB Prince Amukamara, sources tell me and @MikeGarafolo.

•   Do I think the Bears should re-sign Prince Amukamara to start opposite Kyle Fuller? No. But much like I believe there’s no such thing as having too much pitching in baseball, I insist there is no such thing as having too much cornerback depth in football. It’s a pass-happy league and having depth is paramount to team success. Amukamara isn’t the same player he was a few years ago. Hence, the Bears let him go. But he wouldn’t need to be that guy if deployed in a pinch as a reserve. Amukamara is probably looking for a starting role. However, I wouldn’t be opposed to a reunion if the price was right.

•   Some tough injury news for an ex-Bear:

Not good: Trey Burton being helped off the field. Lower body injury. Not putting weight on the leg. Yikes.

#Colts TE Trey Burton has a calf strain, source says. He'll miss some time but not as bad as it could've been.

Ja'Marr Chase has opted out at @LSUfootball. Going on with @CBSSportsHQ at the top of the hour with all the deets. https://t.co/xLGUNcowHc

Vikings will practice today at 2 PM but I’m told Riley Reiff isn’t expected to be there. He was in the building earlier this morning and it sounds like the Vikings have given him a deadline of tomorrow to decide whether he’ll take a restructured deal or be released.

•   No matter what happens, here’s my favorite Riley Reiff memory: