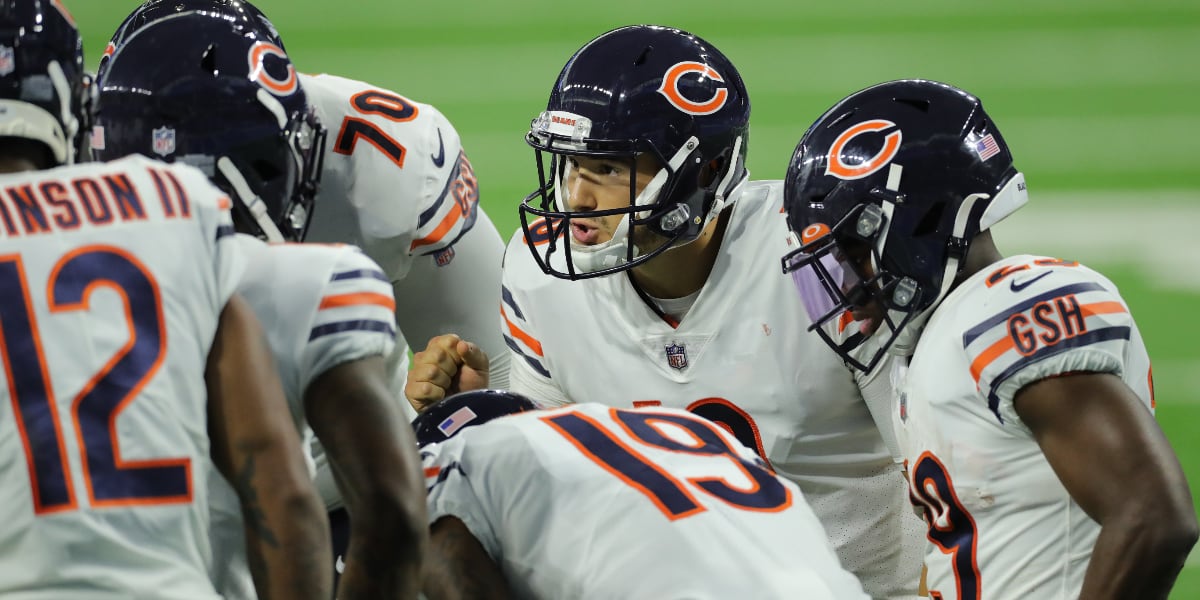 If you were looking forward to seeing how Mitchell Trubisky responded to adversity, then you got your wish on Sunday. And if you were expecting him to fold like a card table, then I bet you’re surprised with how Sunday turned out for the Chicago Bears’ starting quarterback.

After a woeful first three quarters, Trubisky bounced back in a big way in the fourth. He led three touchdown drives to erase a 23-6 deficit and turn it into a 27-23 win.

Trubisky wasn’t perfect. But this post isn’t about that. Instead, let’s hone in on the good stuff (Why? Because we can!).

We’ll get to Trubisky’s fourth-quarter heroics in a moment. But before we tackle that, I wanted to dive into his throw chart:

If Trubisky was going to make good things happen this year, he was going to need to throw it deep. Trubisky appeared to play scared at times last year, opting for quick check-downs instead of taking vertical shots. It was among the reasons he regressed in Year 3 as a pro, as defenses focused on shutting down the short game because the deep pass simply wasn’t an option

Head Coach Matt Nagy has often talked about Trubisky needing to have a “touchdown to check-down mentality” when playing the position. It’s just one game, but Trubisky throwing 20 passes 10+ yards down the field – including 9 that were 20 yards or more — hints at Trubisky at least showing a willingness to push it vertically. Should he continue, he has a fighter’s chance at retaining the job. And if he continues to have success, Trubisky just might run away with the thing.

The Haters Will Say This is Fake

Gotta give credit where it’s due. Trubisky balled out in the fourth quarter. And without those efforts, the Bears wouldn’t have won that game. Without a win, the narrative of the season changes completely. Heck, I could make a case that losing Week 1 could have changed Trubisky’s entire career arc. We don’t live in that alternative reality, so we don’t have to travel down that road.

Instead, we’ll focus on how Trubisky is literally a history-maker with what he did on Sunday:

According to NFL Next Gen Stats, Mitchell Trubisky threw 3 TD in the 4th quarter of the Bears' comeback win, all of which were in a tight window (less than 1 yard of separation)

Trubisky's 3 pass TD are the most in a single quarter since Next Gen began tracking 5 seasons ago. pic.twitter.com/Z75bCO95rV

Trubisky is in rarified air with this company. George Blanda is a Hall of Famer. Jay Cutler is the most statistically accomplished quarterback in Bears franchise history. Erik Kramer put up the single greatest statistical season in the modern era of Chicago’s signal callers.

Sure, we could look at this data set and benign the Bears’ history at the position. Or we could enjoy that Trubisky came through with his back to the wall, job hanging in the balance, and game on the line. It takes some real marbles to pull through in that scenario, even if the Lions were down to their third, fourth, and fifth best available cornerbacks.

Maybe Sunday’s showing will be the start of positive regression for Trubisky, whose fourth-quarter numbers in 2018 were respectable. I can not say the same about his 2019 stats.

Expecting Trubisky to put up a 140-something passer rating every fourth quarter would be unfair. But if his stats lean more toward 2018 than 2019, it could count as growth.

But Seriously, These Throws…

MITCH TRUBISKY FOR THE LEAD!

Another great catch by the #Bears. A one-handed grab on the sideline by Anthony Miller. Wow. pic.twitter.com/lv1ShPzXu4

The catches were pretty darn good, too. But to make the throws in the first place – knowing what we know about Trubisky’s previous reluctance to let it rip downfield – is impressive.

Lions fans have been clamoring for new ownership for years. I just didn’t expect for it to be a Bears quarterback

Best owners in the league pic.twitter.com/dy5Ot1yqw0

One For the Road

The Lions had a 98.3% chance of winning with four minutes left fourth quarter

They lost to [reads notes] Mitch Trubisky and the Chicago Bears?! pic.twitter.com/Nr2z6VFRvh