The Lions Should've Seen the Miller Catch Coming ... the Bears Did the *Exact* Same Thing to Them Last Year | Bleacher Nation Skip to content 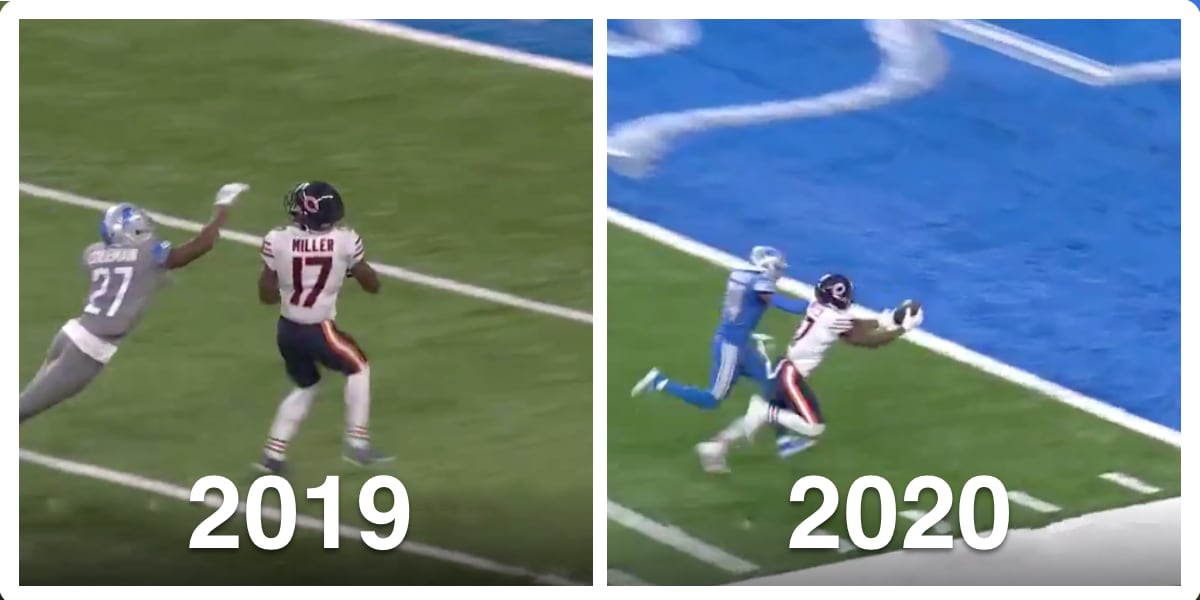 My mother and I bonded over baseball when I was growing up. And because of that connection, I would try to get her baseball-themed gifts whenever possible. One of my favorites was a book of Yogi Berra sayings. Because, as a native New Yorker, I thought she would appreciate the zany sayings of one the game’s great characters. Based on her random dropping of a Berra quote, I know she appreciated the gift.

I found myself thinking about an all-time Yogi Berra quote on Sunday when Mitchell Trubisky connected with Anthony Miller on what turned out to be the game-winning touchdown pass in a 27-23 Bears win. In case you missed it, here it is:

There’s so much to love about this play. The play call and design by Matt Nagy are flawless. Protection from the offensive line holds up. And we already know the throw from Trubisky and catch by Miller were superb (Trubisky lets it fly when Miller is on the 20 yard line, but he doesn’t catch it until about the 3 yard line). But above else, there was this inescapable sense that we had seen this before.

It turns out that we did:

Really hope Anthony Miller gets a chance to carve up the Lions like he did last Thanksgiving. pic.twitter.com/KASResDPMr

The play the Bears ran on their game-winning touchdown yesterday was the same one that set up their game-winning score in last year’s Thanksgiving day win. Similarities in play design, route concept, and even part of the field can’t be ignored. Down to the detail, the Bears beat the Lions with a play witch which they had previously beaten them.

Or as Yogi would put it, “It’s déjá vu all over again.”

2021 Offseason Outlook: It’s All About the Quarterback