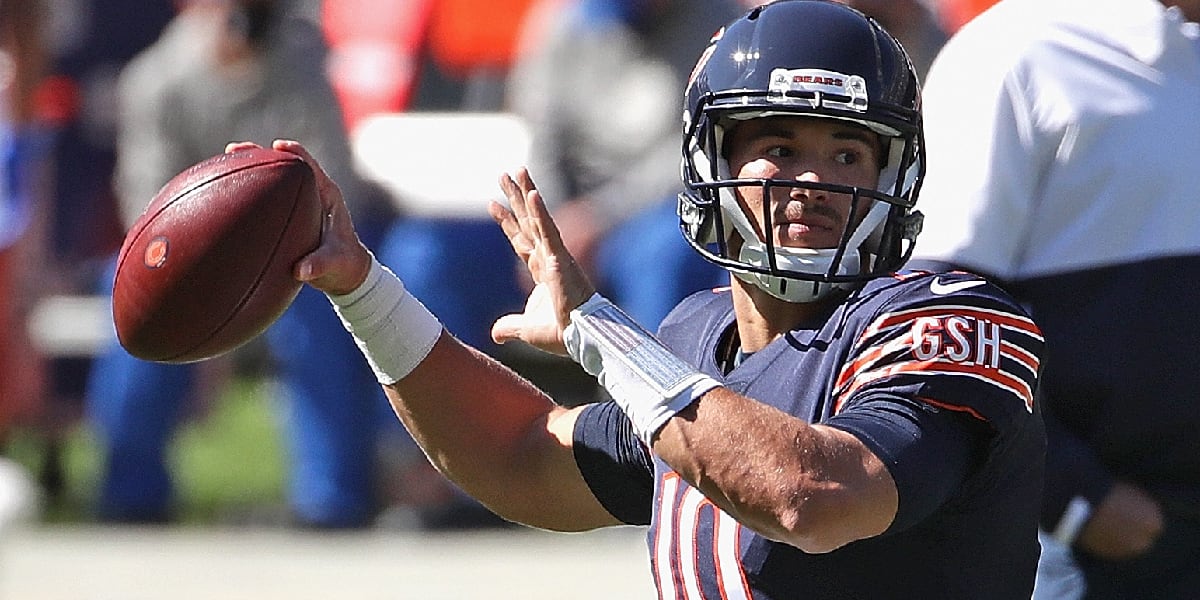 One reason the Bears are off to a 2-0 start in 2020 is because of Mitchell Trubisky.

Don’t believe me? Fine. Let’s check in with Pro Football Focus scribe Sam Monson, who writes: “If Trubisky plays the remaining 14 games at the level he has played the opening two, Chicago will earn one of those [wild card] spots and be playing January football once more.”

Grades are out for Week 2!

Trubisky the 7th-highest graded QB of the week, showed an improved process & had a lot of nice intermediate throws. Second ARob INT in my opinion wasn't Trubisky or ARob's fault, it's why you pay James Bradberry $14.5M per yearhttps://t.co/ZXpEs8HOoa

Mitch Trubisky was the #Bears highest-graded offensive player in the Week 2 win over the Giants at 80.2 overall pic.twitter.com/ZfvjeYWRJQ

To be honest, I still need to be convinced by more than a two-game stretch. Preferably, we’d see a similar two-game stretch against potential contenders. To be clear, I don’t write this with the intent to take anything away from what Trubisky has done to this point. It’s just that I’ve been fooled by a small sample rope-a-dope before. And shredding the Lions late in Week 1 and the Giants early in Week 2 is just not enough yet. But, I mean, hey: Trubisky played his best statistical game since Week 12 of the 2018 season per PFF’s analytics, which is one of the most encouraging things I’ve read to this point of the year.

One of the most important trends thus far is Trubisky’s willingness to throw it downfield. It starts with 60.9 percent of Trubisky’s throws have gone past the sticks. That represents a 16.3 percentage-point increase over 2019 and a 17.4 percentage-point difference compared to his 2017-19 numbers. In other words, a more confident and aggressive Trubisky slinging the pill has led to increased production. Fortune favors the bold. And to this point, the juice has been worth the squeeze from a results standpoint.

And to make things that much sweeter, Trubisky isn’t doing it all alone.

Trubisky has plenty of reason to have the confidence to throw downfield with conviction.

It starts up front. Charles Leno Jr. is PFF’s third-highest-graded pass-blocking tackle. Only Rams veteran Andrew Whitworth (88.9) and Ravens stud Ronnie Stanley (90.1) have been better than Leno (85.5). Free agent addition Germain Ifedi has been impressive in his own way. The tackle-turned-guard on a one-year “prove it” deal has the 11th-best pass-blocking grade among the 72 qualifying guards. Center Cody Whitehair ranks in the top-10 at his position. And James Daniels checks in among the top-30.

In short, improved line play has opened things up for Trubisky, the skill-position players, and the rest of the offense. No, the Bears aren’t racking up the points yet. But this is how the offense was supposed to work. If this play continues, the points will eventually come. There’s still stuff to work through, but the underlying numbers are far more encouraging than what I expected them to be through two games.

Which brings me back to Trubisky’s early season leap. Trubisky’s improvements have him playing a key role in the Bears’ 2-0 start. He isn’t just along for the ride. He’s making things happen. It’s something that this storyline is even developing this way knowing that Trubisky saw his team show interest in Teddy Bridgewater, Cam Newton, Andy Dalton, and Tom Brady (among others?), ultimately trade for Nick Foles, decline the fifth-year option on his rookie contract, and thrust him into a competition for a starting job. You can’t predict football, my friends.

It’s mind-blowing that a player who was on the cusp of losing his starting job has been a main contributor to start the 2020 NFL season. I’m not sure you can write a better script than seeing a player pushed to the edge, only to emerge as his best self. It’s early. And there’s a lot to write between now and the end of this football season. But I’m here for the ride. The Trubisky rollercoaster has had its ups and downs in the past, but isn’t the unpredictability of it all why we watch football in the first place?