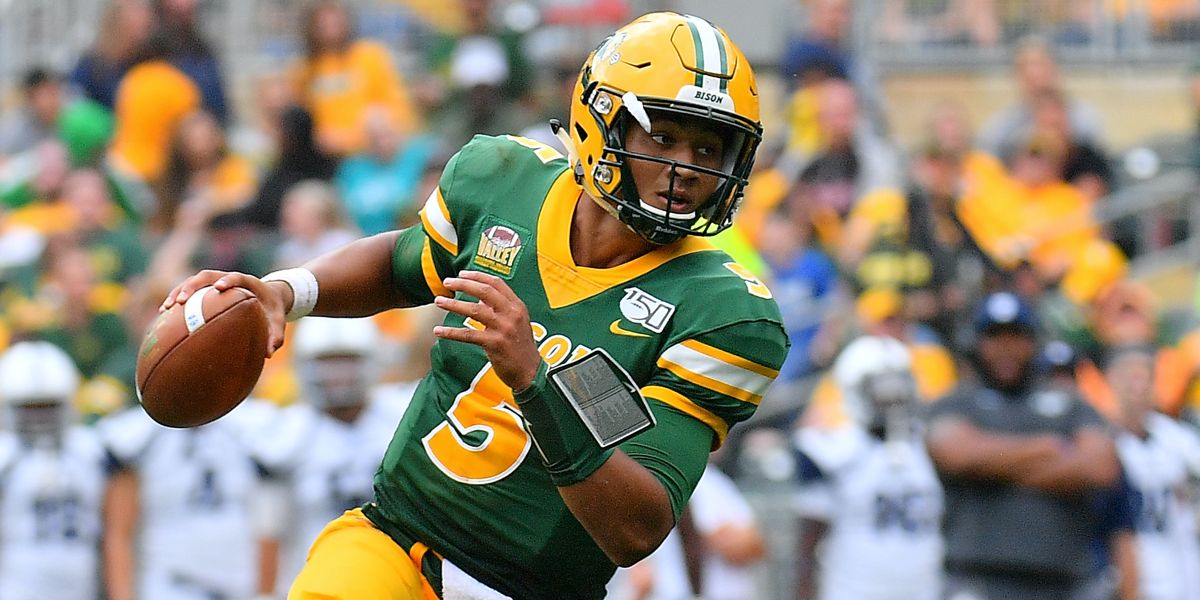 Bears fans didn’t need another reminder that projecting college quarterback prospects is incredibly hard. But one came anyway in the form of Kalyn Kahler’s Bleacher Report profile running down the how and why the Bears landed on drafting Mitchell Trubisky (and not Patrick Mahomes or Deshaun Watson). The piece is worth your time to read, but I can’t get past a number of anecdotes.

But rather than re-hash a topic we’ve re-visited (to death) since 2017, let’s use that piece as a vehicle to discuss the next crop of QB prospects over which we’ll obsess between now and the 2021 NFL Draft.

Near the top of the list is North Dakota State’s Trey Lance. As a redshirt freshman, Lance threw 28 touchdowns without an interception as he led the Bison to a FCS national title. Lance added more than 1,100 rushing yards and 14 ground scores. He is a dual-threat quarterback whose game appears to be one that could flourish at the next level.

Adam Hoge (NBC Sports Chicago) confirms reports the Bears were one of the 20 NFL teams in attendance watching Lance’s showcase game against Central Arkansas. It was North Dakota’s only scheduled game this fall. Which means it might’ve been the only time scouts get an opportunity to evaluate Lance in a game situation before the 2021 NFL Draft.

I watched the game on ESPN+, and left unable to shake the feeling that Lance’s best throw on Saturday was dropped was symbolic of his overall performance:

Lance completed just 15 of 30 passes, threw for 149 yards, 2 touchdowns, and an interception. He added 143 rushing yards and two touchdowns on 15 carries. And while his team won, Lance’s performance left much to be desired. Specifically, his throwing left me wanting to see more. Lance’s accuracy was off, as was the touch on deep balls. And his inability to move the offense while throwing against zone looks was troubling, to say the least. Defenses aren’t going to get easier as he moves up the competition ladder.

Sure, there were some splash plays on the ground:

Trey Lance hasn’t looked all that great today, but this was a really nice run from him.

Nice vision, speed and contact balance on the keeper. One of the best running QBs in the 2021 draft class. pic.twitter.com/gqDZPycn11

Great run from Trey Lance to start the second half. He reads in between the tackles like a RB and is tough to bring down with his size and speed.

His throws have been suspect, but he’s looked the part as a runner today. pic.twitter.com/0CCwWWuUCh

But not enough to make me feel good about his overall performance. It was a disappointing showing for Lance, considered to be one of the best draft-eligible QB prospects in 2021. But I know better than to assess quarterback play based on one game.

Don’t get me wrong. Athleticism, mobility, field vision as a runner, and play-making ability are important assets to possess. Those things will make Lance a hot name on draft weekend. But Lance’s struggles in the air against Central Arkansas will be a red flag for some. Maybe there were some nerves and jitters that came with that game being a showcase for NFL scouts in attendance. Even still … I wanted a little bit more.

Our friend Joe’s Trey Lance thread can be found below:

He'll want this throw back. But the positive is that he stood in there with pressure, took a hit and still got velocity on this ball. pic.twitter.com/xATjMS7DFh

Because of the state of college football, I’m unsure when Lance’s team will play again. However, I’m looking forward to seeing his rebound efforts.