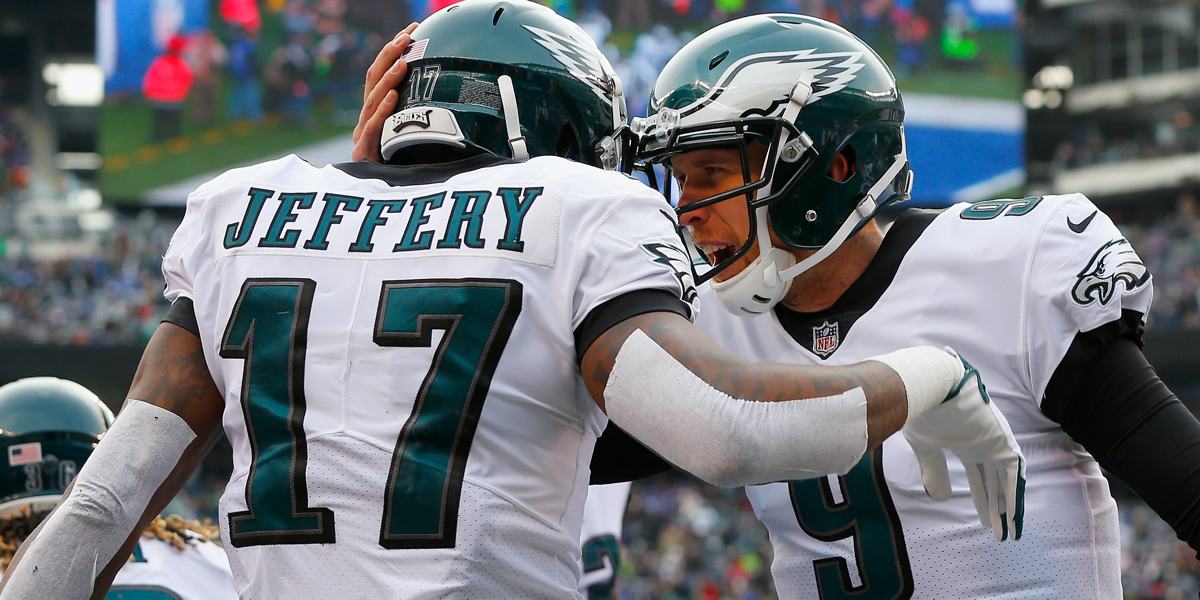 Alshon Jeffery is one of the most polarizing Bears players in recent memory.

On his best days, he would dwarf over would-be defenders, out-leap them, and snatch passes from Jay Cutler and Josh McCown en route to scoring touchdowns. But there simply weren’t enough healthy good times from Jeffery, whose final season was shortened by a PED suspension and who ultimately was allowed to walk without receiving any compensation. And because Jeffery was caught sneak-dissing his ex-mates before the Bears-Eagles playoff game a few years ago, there’s some understandable salt in the wound of Bears fans

Hence, I’m certain there was a segment of fans who cringed when they saw this:

Nick Foles said Allen Robinson's catch radius reminds him of when he played with Alshon Jeffery in Philadelphia. #Bears

But as far as I’m concerned, this is a good thing.

Foles excelled when targeting Jeffery in the handful of regular-season games they played together. And in the postseason, the Foles-Jeffery connection was even better. Browsing through the numbers gathered at Pro Football Reference has me hoping a Foles-Robinson connection can be this productive:

It makes sense as to why Foles and Jeffery successfully linked up in Philly. Jeffery’s propensity to come down with more than his fair share of 50-50 balls make him an offensive asset, especially in bail-out situations. Foles throws a pretty deep ball and is willing to roll the dice on a 50-50 throw. And because Jeffery’s ball-skills were excellent, that tandem was successful.

For what it’s worth, the Foles-Robinson tandem is already off to a strong start. Foles owns a 113.3 passer rating when targeting Robinson this season. The QB has completed 68.8 percent of passes to Robinson, thrown for 155 yards and two touchdowns. There was an interception, but we all know it was bull plop.

I think anything Jeffery could do at the peak of his powers with Foles is something Robinson can do better right now. Because not only does Robinson possess the ability to haul in tough passes in jump-ball situations, he is a far better route-runner than Jeffery. This gives Foles even more options in which he can target Robinson. Route-running excellence and ball skills makes Robinson the perfect Foles target.

So get Robinson the ball early and often, and let’s see what these two can do!