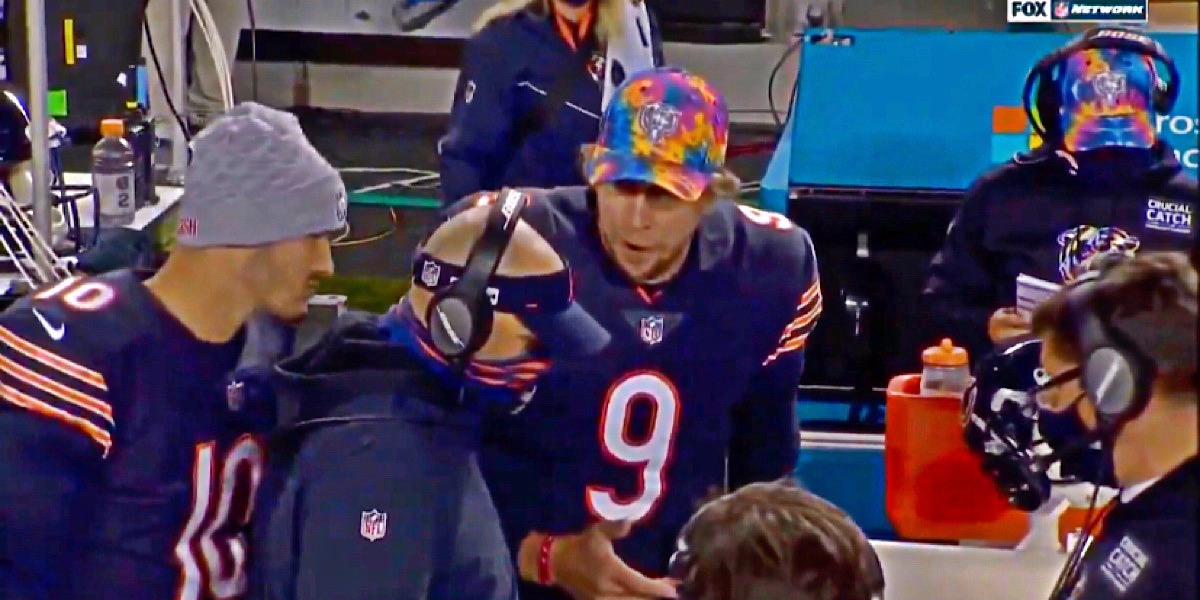 Nick Foles is a streaky passer. So when he gets into a rhythm and things are clicking, the best way to go about running the offense is to let things roll with tempo.

And that’s exactly what the Bears were doing while trailing 16-14 early in the fourth quarter on Thursday against the Bucs. Foles orchestrated a no-huddle drive that got the team into a 1st-and-10 situation at the Buccaneers 15-yard-line. The quarterback clearly saw something in the Buccaneers defense he wanted to continue exploiting. Moreover, he wanted to do it by playing with pace and not allowing the defense to rally the troops or get new personnel on the field.

And then Head Coach Matt Nagy sabotaged his offense by substituting players for a particular play he wanted to run in that situation.

Maybe in an alternate universe, the play works and it goes for a touchdown because Foles saw that Cordarrelle Patterson had an angle to the end zone. But in this reality, there was a breakdown on the line, Foles took a sack and fumbled on a play, costing the  team 15+ yards. The drive-killing decision ended with Cairo Santos making a 47-yard field goal. Whew.

What came next was a thing of beauty (sound on):

You’re up, Nick. Bring that juice to this drive please. pic.twitter.com/dmPdN1hALf

This is excellent in-game, in-the-moment analysis from Troy Aikman. It was clear that Foles didn’t want Nagy to switch it up because he had something good going. Additionally, this is superb production and camerawork from the FOX broadcast crew to capture a moment in which the coach and quarterback have a real conversation about what was happening in the guts of the game.

Most importantly, the best part was seeing a glimpse at what a real coach-quarterback relationship looks like.

On one side of the conversation, we have a frustrated Foles pleading his case and explaining what he was seeing on the field. Foles felt he was in the right, so he let his coach know about it. Then there’s Nagy on the other side, who understood his quarterback’s point, but also saw an opportunity for a touchdown-scoring play and didn’t want to pass it up. And finally, there’s Mitchell Trubisky entering the conversation with a slide into the frame that would make Cris Collinsworth blush. But this post isn’t about Trubisky. It’s about how communication is king. And how there’s nothing better than quality give-and-take in a relationship.

Consider how Nagy later spoke about that heated discussion with Foles.

“We had a play that we’ve liked that’s been in the playbook here the last couple weeks and we loved it in that area,” Nagy confirmed, per NBC. “Cordarrelle was running open in the end zone for a touchdown on that play and we weren’t able to get (the throw) off …. In that situation right there, I think that’s where you guys will start seeing with Nick and I, when we start growing in this thing – and I agree with him, like once you get going and you’re in a little bit of a tempo, we kind of had them on their heels. And his point was, hey, once we got ’em on their heels like that, let’s keep them there and let’s do some things.”

Foles has a coach that will push his buttons. Nagy has a quarterback who can be a sounding board. This is new territory for these two in Chicago. Heck, this is new ground for Bears fans. And I’m intrigued to see how it plays out moving forward.

Last year, we saw Aaron Rodgers and Matt LaFleur have some pretty public disagreements. It was petty and we had fun at their expense. But I see they have grown since the early days of that tandem. That’s what it looks like when coach and quarterback are on the same page. I’m not saying Foles is about to put on a Superman cape, but maybe there’s value in healthy disagreements like this.