The Vikings Always Find a Way (To Make Us Laugh), Crazy Football Sunday, Schedule Thrown for a Loop, and Other Bears Bullets Skip to content 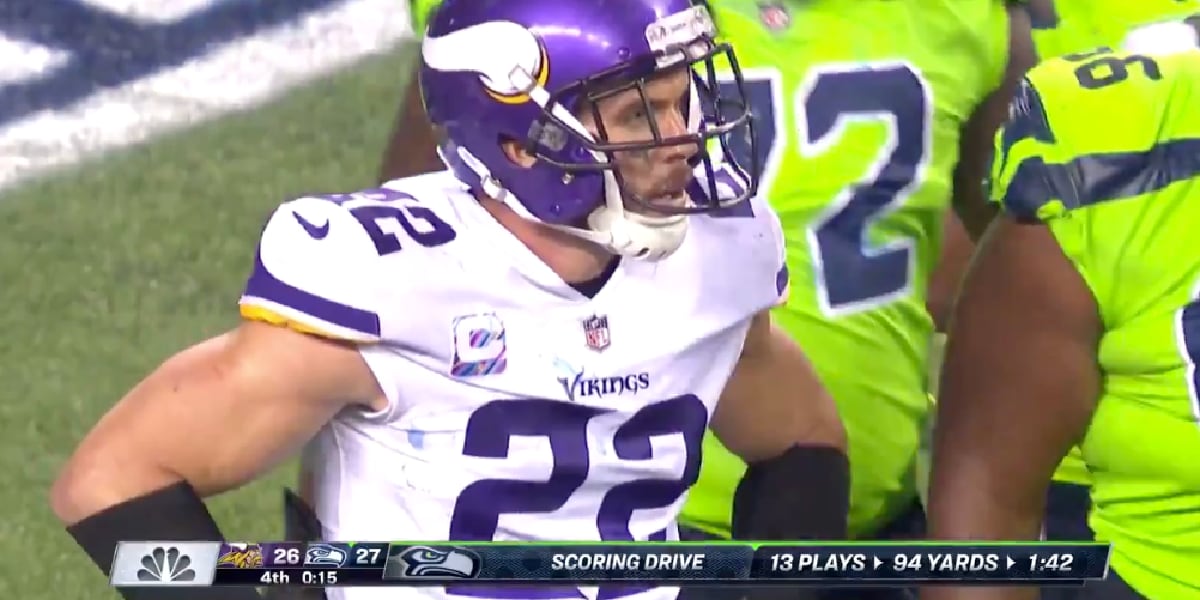 It’s that time of year when I take a long look at my freezer, convince myself not to order in, and whip up something delicious with whatever I have at home. Last night, it was a pork tenderloin inspired by my friend Jim’s recipe. And if you follow me on my personal Twitter page, you’ll already know that it was as delicious as it looked.

•   Just hoping Vikings fans don’t have to wake up to this popping up on their timeline. That would be a tough break:

•   No team has cornered the market on gut-punching, soul-snatching, heart-wrenching losses like the Minnesota Vikings. And I say that as someone who lived through the double-doink. The Vikings don’t just find new ways to lose, they do so in high-profile games in the most unique circumstances. It’s an art form. And frankly, it’s impressive. They’re 1-4 now and reside in last place in the NFC North after Sunday’s action.

I added an arrow so you can identify the hole Mattison missed. pic.twitter.com/hPDZY01DqE

Vikings held the ball for 40 mins and didn’t allow a third-down conversion and still found a way to lose. pic.twitter.com/tQ46s4NLlH

•   Thanks for the help, Seahawks. I’m mentally sending a virtual gift basket to you. In my mind.

•   ICYMI: Sunday was a wild one. On a day in which Alex Smith returned to football for the first time in 693 days after suffering a gruesome leg injury, Dak Prescott suffered an awful ankle injury of his own. It was reported that Saints receiver Michael Thomas was benched for tonight’s game against the Chargers because he punched a teammate. Don’t punch your teammates. It’s not nice. The Falcons fired Head Coach Dan Quinn and GM Thomas Dimitroff after losing to the Panthers. Atlanta became the second franchise to give its head coach and GM the heave-ho last week, following a Texans franchise that canned Bill O’Brien.

•   The most surprising story from Sunday might’ve been Adam Shaheen finding the end zone for the first time since 2018. Go get ’em, Adam! The more you play, the better Chicago’s draft compensation will be from Miami.

•   As for the most encouraging local story, it’s that the Bears reportedly had no positive COVID tests on Sunday. That came one day after the team placed practice squad offensive lineman Badara Traore on the reserve/COVID-19 list. The Patriots and Titans still have work to do to get back on the right path, but no positive tests in Chicago is a step in the right direction.

•   COVID cases with the Patriots and Titans are throwing the NFL’s schedule for a loop:

•   Remember when Khalil Mack was wrecking dudes on Thursday? That was fun. Re-visit his dominance here:

Just how dominant was Khalil Mack in the Bears’ win last week? @kfishbain’s All-22 look: https://t.co/VU7tBb6t0u

•   One last look at the Bears’ Week 5 performance through the eyes of JJ Stankevitz’s grades at NBC Sports Chicago.

•   Can’t get enough of Kyle Fuller’s growth in recent years:

•   Always good to know who your reps are:

Including tonight, the NBA played 172 games over three months and had ZERO positive coronavirus tests. pic.twitter.com/2HoWO4JvES

•   A reminder to all of you young writers out there:

•   In fairness, this advice can be applied to any profession. But I speak from experience when I say picking up hobbies unrelated to journalism is a good move. Heck, I wish I had more.