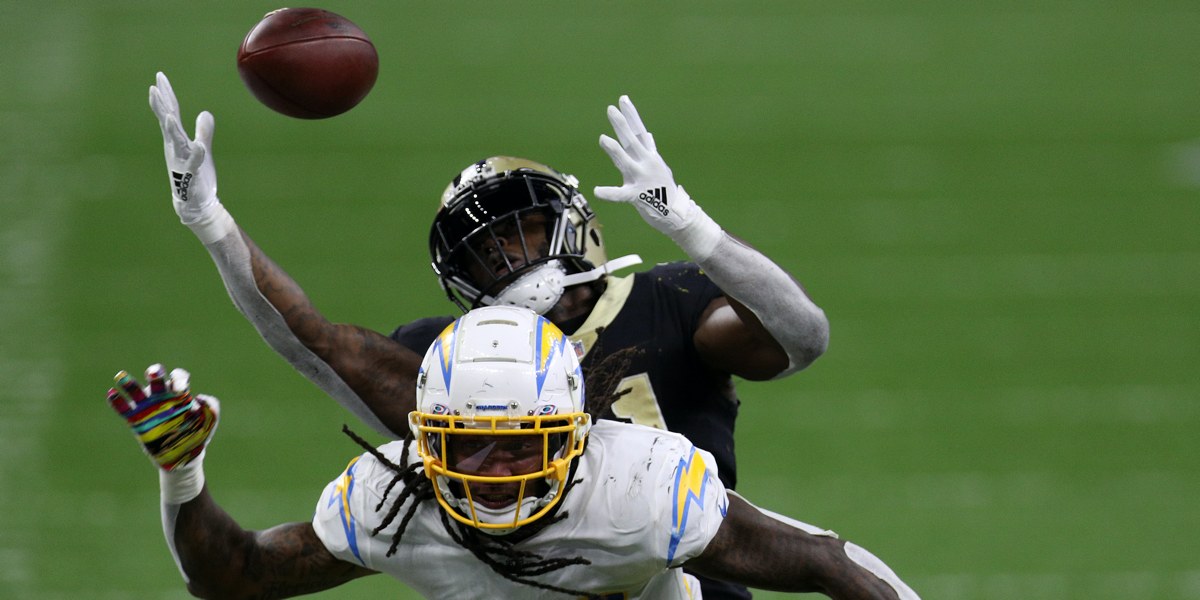 FOX’s New Girl was one of my favorite TV shows between 2011 and 2015 when it was at its peak. And while I never made it through to the series finale, it’s still on my bucket list because I like to see things I start through to the end. In the meantime, I’ll enjoy the the re-runs that I can run into via TBS on-demand. Because sometimes, it’s fun to re-visit things you liked that made you smile and laugh during times when it wasn’t easy to do either.

•   Death, taxes, and the Bears’ position on this chart:

NFL scoring performance relative to their schedule through week 5

•   What’s more annoying than watching someone else’s prized quarterback prospect flourish? Watching it as the Chargers failed to pull off the upset. I’m a selfish Bears fan trying to see the best possible road to a postseason spot. And a Saints loss last night would’ve helped. New Orleans’ playoff probabilities went from 63 percent to 72 percent, according to FiveThirtyEight’s data and simulations. Grumble. That was a missed opportunity for the Bears to get some much-needed help from an unexpected source. It might not feel like much right now, but I know better than to think that every game doesn’t matter in one way or another.

•   One night after we watched the Vikings invent a new way to lose a football game, we witnessed the Chargers play a game of “anything you can do, we can do in a more heart-breaking fashion” on Monday Night Football. After racing out to a 20-3 lead, the Chargers couldn’t muster up much more and the Saints took advantage of it. And when the ESPN crew mentioned that Los Angeles’ kicker nicknamed himself the Money Badger, the Chargers might as well have been doomed. The Saints won in overtime despite not looking like it deserved a win. Which, once again, goes to prove that winning ugly matters to no one because beauty is in the eye of the beholder.

•   Justin Herbert sure looked impressive. Last night’s line (20/34, 264 yards, 4 TD, 0 INT, 122.7 rating) would’ve been viewed as a coming out party had his kicker nailed a game-winning field goal. Nevertheless, I see Herbert shining after being the third quarterback taken in the 2020 NFL Draft and start dreaming about how the Bears can find one of their own.

•   Well, it’s not as if the Bears don’t have alternatives:

Given that every skill position player seems to improve after leaving Adam Gase, yes! https://t.co/mNtQyPUY6F

•   Had enough football yet? Of course you haven’t. The Bills and Titans play tonight at 6 p.m. CT on CBS.

•   Smooth transition into the latest COVID protocols the NFL is implementing:

The NFL informed clubs in a memo tonight that beginning in Week 6, all players and other Tier 1 and Tier 2 individuals will undergo PCR testing for COVID-19 on game days, per source.

Before, everyone was tested the other six days a week. Now, there’s game-day testing too.

•   For the Amazon Prime users among you, today is Prime Day, so there are a boatload of deals over at Amazon. As an Amazon Associate, BN might get a cut of some of the revenue from your shopping, so thanks for the #ad support.

•   Over at NBC Sports Chicago, Cam Ellis discusses how the Bears are dealing with their first COVID-19 case since the regular season began in September. Matt Nagy did his best to drive home the importance of following precautionary measures. And the Bears handled things well when they had a COVID scare back in August. Here’s hoping there were real lessons learned and that they continue to be applied moving forward.

•   Thinking about this weekend’s case had me thinking about when Andre Tucker showed off the team’s COVID-19 safety protocols:

Bears DL Akiem Hicks: “I can't imagine that too many people in our country right now are experiencing a level of comfort, and I don't think that falls outside the realm of professional football. So I think that it's a trying time. I think that it's tough on everybody.” pic.twitter.com/gwFfWA9Acf

•   This is a neat breakdown of one of my favorite plays from Week 5:

•   A broadcast note for Sunday’s upcoming game against the Panthers: