O-Line Better Than You Think, Trusting Foles, Remember Moose? And Other Bears Bullets Skip to content 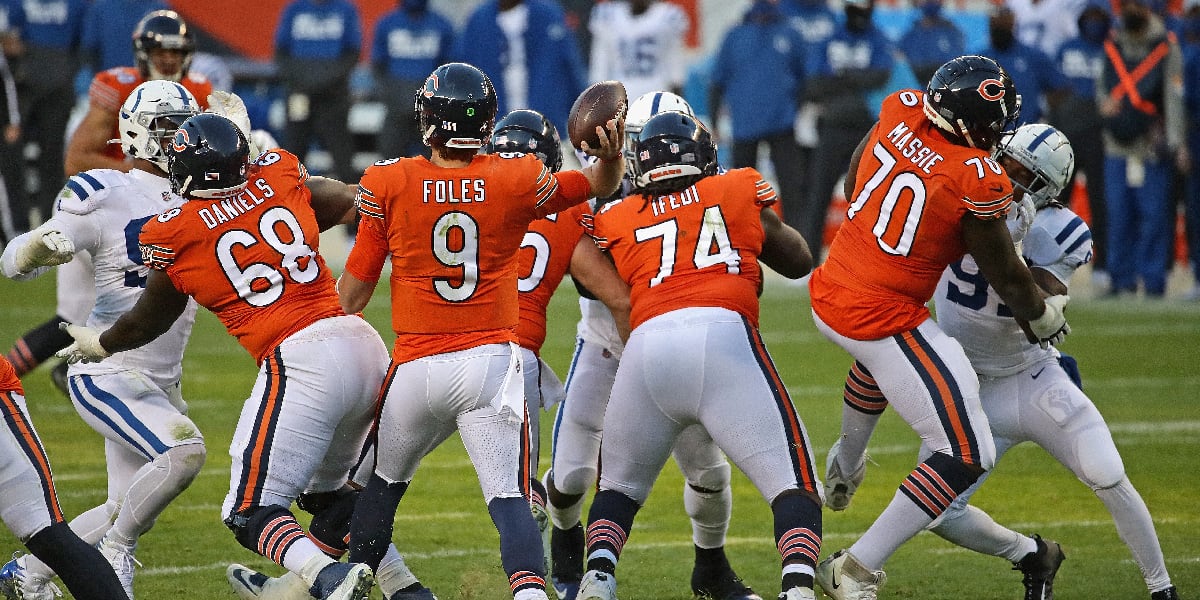 Shout out to the Tampa Bay Rays for sparing us from having to watch a sub-.500 team reach the World Series. As for the other side of the bracket, the loser of tonight’s Braves-Dodgers Game 7 will ultimately spend the offseason bemoaning a missed opportunity. Sandwiching that drama with a full slate of NFL games should make for a wonderful Sunday.

•   That’s right! I said a full slate of NFL games because there’s good news to report on the COVID-19 front:

•   We know by now that the NFL’s teams aren’t out of the woods just because there was a clean day of testing without new positive cases. However, it should be viewed as movement in the right direction. Whether it’s long-lasting positive moment is to be determined, but the league needed to get one day of good news in order to get the ball rolling.

•   After a summer of hand-wringing when discussing the Bears’ offensive line, we now have five games in which to assess their play. And even though that isn’t the greatest sample to pull from, it’s enough to start drawing some conclusions. So far, the early returns are better than expected:

Updated offense win rates after Sunday. Horizontal is pass block. Vertical is run block. Up and right are good. ESPN model based on tracking data via NextGen Stats. pic.twitter.com/2AgZ5L5JtN

•   Brian Burke’s graph outlining each team’s offensive line play using an ESPN model tracking pass- and run-blocking win rate based on the NFL’s NextGen Stats is enlightening. The Bears find themselves right in the middle of the chart, which is better than I would’ve otherwise expected. Average is good. It’s certainly better than being bad. I understand when people take the opposite stance and suggest average isn’t good, but the difference between “average” and “bad” is stark. So don’t take “average” for granted.

•   Sigh. I’m going to miss James Daniels, who is out for the rest of the year with a pectoral injury.

•   Allen Robinson is catching everything (whether he’s covered or not):

Trust in the Foles pic.twitter.com/hIddgS0oJJ

•   Nick Foles’ ability to slow the women down in pressure packed games is unique:

•   Cordarrelle Patterson is more than the other guy deserving an extension on the Bears offense. He’s also an elite contributor in special teams, too:

Cordarrelle Patterson has been phenomenal as a kick returner for the #Bears this year.

•   I knew the Bears were faring well in the field position department, but didn’t realize how good things were until reading Jacob Infante’s tweet. It would be nice if Chicago’s offense pieced it together and took advantage of excellent starting field position provided by an ace kick returner.

•   The Bears have been a pass-happy bunch since naming Nick Foles the full-time starter, averaging more than 40 passes per game. Some of it has to do with how often the Bears have trailed in those games. But we also must factor into the equation how good the Colts and Bucs are at stopping the run. I understand the desire to run the ball and establish that identity. But running for the sake of it isn’t going to work. Isn’t that why we disliked John Fox’s stubborn ways? Running into a brick wall for the sake of balance isn’t winning. Should the Bears get out to an early lead, I expect them to use the run game to salt the game away.

We looked at QB Teddy Bridgewater in Joe Brady’s offense.

Here’s how CAR can influence defenders in coverage to scheme a high-percentage throw to WR Robby Anderson. @gregcosell @NFLFilms pic.twitter.com/1twQu9Slip

•   You could probably give this award to Khalil Mack every week, but kudos to Buster Skrine — whose signing has been an underrated one:

Fun #Bears-Panthers fact that has nothing to do with today's game: Muhsin Muhammad is the only player in Bears history to catch a TD pass in the Super Bowl (4 yards in SB XLI) and also holds the record for longest reception in SB history (85 yards in SB XXXVIII w/ Panthers).

•   Some Sunday matchups with additional intrigue:

Ravens and Eagles made a significant trade leading up to today’s game, as the Chiefs and Bills once did leading up to their Monday matchup: pic.twitter.com/tPi35FdPi2

•   Let’s get weird in that Jaguars-Lions game:

This is… Not an exaggeration.
Jaguars kicker today is Jon Brown, who:
—played WR/KR in HS
—played soccer at Kentucky
—transfered to kick at Louisville, but only did kickoffs
—spent some preseasons with the Bengals but never got in a game
He has Never. Ever. Kicked. A Field Goal https://t.co/SB9qlXeVqa