Now, THAT is How You're Supposed to Use Cole Kmet Skip to content

I think I struck a chord with Bears fans when voicing my concerns about Cole Kmet’s development, but I maintain I was standing on strong ground. Kmet hadn’t earned much playing time and hadn’t played well in the snap shot we’ve seen him on the field. Next time, I’ll make it clearer that I’m not giving up on a second-round pick who was widely viewed as the top tight end in his class. Perhaps I’ll have Michael edit it to make the type bigger and bolder.

In a moment of honesty, I’ll tell you that I feel better about Kmet’s development now than I did at this time on Friday. And it starts with this touchdown:

COLE KMET, THE FIRST OF MANY. pic.twitter.com/P4XVC7Y86G

There’s a lot I like about this play beyond just the result. Spreading out the defense in a goal line set isn’t always easy, but it happens here. Kmet’s route is one that gets him into the end zone, which shouldn’t be overlooked. I’ve lost track of how many times a Bears player has settled short of the line to gain in recent years, made a catch, and ultimately had nothing to show for it. Credit Nick Foles’ throw for getting to a place where the 6-foot-6 tight end could make a play on it. And ultimately, the play on the ball made by Kmet is a heckuva catch. That’s one for the highlight reels, kid.

All of this to say that this is how the Bears should use Kmet moving forward.

I understand he’ll have limitations as a rookie. Kmet won’t have a full grasp of the playbook for quite some time. His blocking could still use some work. But the Bears need to take advantage of Kmet’s 6-6 frame, 79-inch wingspan, and go-up-and-get-it ability in the red zone. Kmet showed he can get balls wherever they’re thrown and that he possessed the ability to maintain body control in the air while catching passes from Ian Book in college. I think the least he can do is haul in red zone targets from Foles at the pro level. Put him in the slot inside the 20. Create mismatches against smaller defensive backs or linebackers who have a weakness when covering. Get the guy on the field and make the most with what you have as the development process continues elsewhere.

In the end, I’d like to see Kmet get to a place where Foles can toss a pass in his general vicinity and he can come down with it. And I’d like to see it happen with Jimmy Graham on the field, too. Having those two on the field at the same time should create problems for opposing defenses. Toss Allen Robinson into equation, and now we’re talking about an NBA-style front-court with box-out abilities that should surely reveal one mismatch that Foles can identify at the line of scrimmage.

Nagy and the Bears have talked up Kmet in recent weeks. Moving forward, I’d like to see that talk put into action. 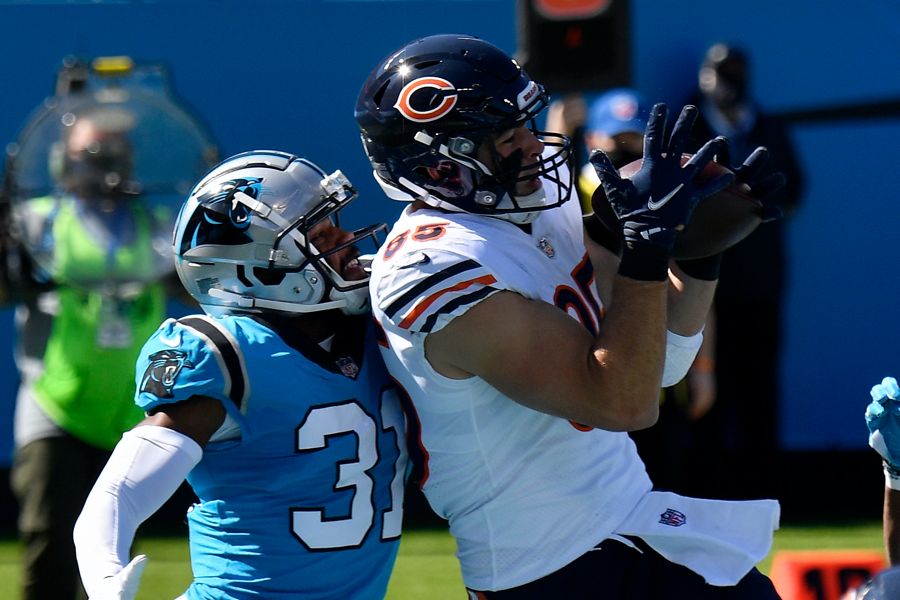