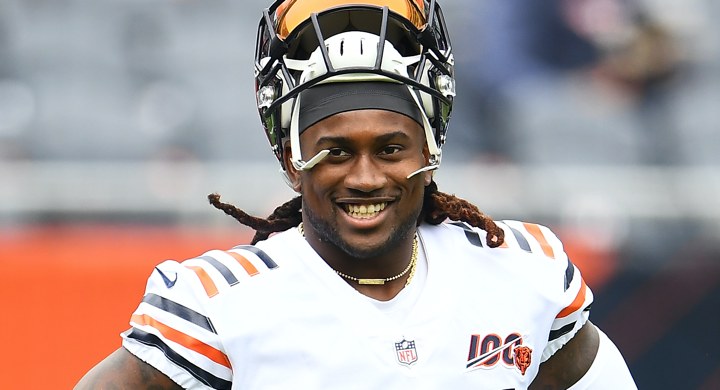 The best shooters keep firing, even through slumps.

So while Cordarrelle Patterson stayed away from getting involved in the Le’Veon Bell sweepstakes, Patterson is back to his old tricks now that an intriguing offensive lineman has hit the market:

To be clear, Patterson isn’t recruiting (Michael: Mhmm … sure). He says as much in his tweet. But what he is doing is watching highlights of free agent left guard Quinton Spain. Talk about a commitment to putting in work in the film room! That Patterson is kind enough to alert his superiors about the work he is doing in the film room is what good team members do to help each other out. Seeing that the Bears lost their starting left guard James Daniels to a season-ending pectoral injury is quite the happenstance. In any case, this is a job well done by Cordarrelle.

As for Spain, he is an intriguing option for the Bears. He is talented, experienced, and motivated to find a new home where he can shine. In short, the Bears should be jumping all over this newly minted free agent.

Quinton Spain, 29, has been a long-time starting left guard for the Titans and Bills, and just re-signed a three-year, $15 million deal with the Bills this past March. His deal comes with only about $3 million in dead cap money over the next two years, so the Bills aren’t hurting themselves that much by releasing him so soon after the signing.

As for why he was released, Spain has been dealing with a foot issue the last couple weeks, and was replaced (capably, apparently), by last year’s second rounder Cody Ford. On first glance, it seems the Bills were just ready to move on and didn’t want to/need to wait for Spain to be ready to go?

If he’s healthy, though, Spain feels like a MUST-target for the Bears. After the loss of James Daniels for the year, it’s been quickly clear that Rashaad Coward and Alex Bars can only do so much as his replacement at left guard. Good depth guys to have, sure, but Daniels was performing at an elite level in the early going. Even Spain probably doesn’t replace Daniels, but he could be a substantial step up from Coward or Bars, plus it would increase the depth.

Also, with offsets thanks to his contract with the Bills, it’s not like Spain would cost the Bears much money for this season – just the prorated veteran’s minimum (so about $600,000). So, yeah. Get on it, Bears.