Did Foles Even Have a Chance? The Rams Futuristic Defense, Shaheen-Shame? Nah ... And Other Bears Bullets Skip to content 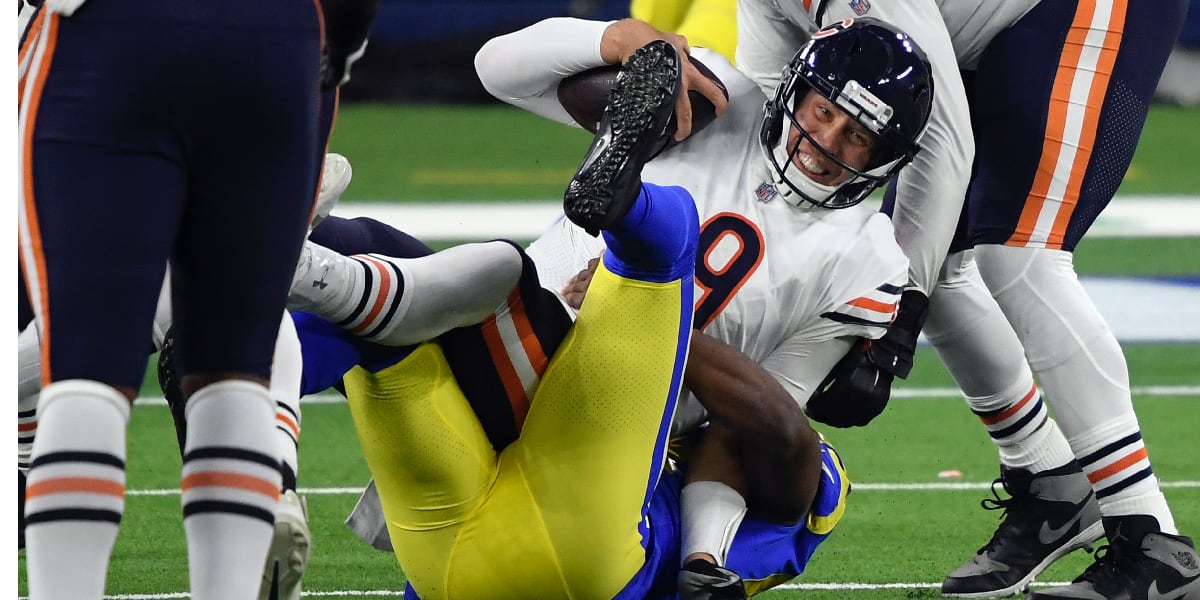 Part of me is disappointed we won’t get a World Series Game 7 tonight. On the other hand, I’m not sure it could’ve been played now that we know Justin Turner tested positive for COVID-19 and was in close contact with a whole bunch of teammates before he was pulled from the game. Nevertheless, we’re onto a sports schedule that’s loaded with football. Dig in.

•   Nick Foles completed 8 of 10 passes on third down, but converted only two of those into first downs because of the pressure he faced. Plenty of those throws came short of the sticks because Foles had to get rid of it quickly in order to avoid a sack. But even on deeper throws, we saw Foles unable to step into throws the way you’d like to see. What a mess. Mind you that none of this absolves Foles from his poor decision-making on interceptions and elsewhere on Monday night. Foles needs to be better at operating within the system. But also, the line needs to give him time to execute within the system in order to give it a puncher’s shot at being successful at any point.

•   One thing the Bears could do is nudge Head Coach Matt Nagy toward handing over play-calling duties. And for what it’s worth, it sounds like Nagy is *almost* ready to *consider* giving it up. I’d like to see Nagy get out of this rut. But wouldn’t it be something for a guy to give up these responsibilities after growing into a head-coach candidate because he got his start calling plays because Andy Reid admitted he was in a slump. It would be a nice sign of growth from the coach, to be sure.

•   I don’t think it’s a coincidence that just four teams on the bottom half of these rankings have winning records:

Motion at the snap rates, through Week 7!

•   Remember when pre-snap motion and misdirection were staples of the Bears’ offense? Gosh, 2018 feels like such a long time ago.

•   An old friend seems to have taken a liking to his new home:

•   Tight end Adam Shaheen signed a two-year extension with the Dolphins, who traded a conditional pick to the Bears last summer to add him to their position group. In other words, that conditional pick might as well be locked into being in Chicago’s possession. And that it’s a pick coming from the Falcons makes it that much juicier. Thanks for doing business, fellas.

•   I understand the default is to think Bears GM Ryan Pace screwed up here. And I suppose there’s enough on one side of Pace’s ledger to understand where you’re coming from. But I need you — stares into the camera directly at Brett — to understand that news of this extension is far from embarrassing for the Bears. Chicago traded Shaheen because he was (1) injury prone, having missed 21 games in his first three seasons and (2) unproductive in the games he played. The Bears could’ve cut Shaheen at any point between March and when they traded him n the summer and the move would have been widely applauded as good process that came with a touch of cap savings.

•   But also … let’s not act like Shaheen is setting the world on fire. When it comes to snaps, Shaheen is behind Mike Gesicki and Durham Smyth on the depth chart. Secondly, Shaheen has zero (0) special teams snaps, making him a non-contributor in that facet of the game. Thirdly he is on pace for 13 catches, 155 yards, and 5 touchdowns. And, yes, that’s even after catching scores in back-to-back games. There’s obviously room for Shaheen to grow and there could be ample opportunity for him to start scratching away at his potential. But the Dolphins gave some serious coin to a TE3. I’m always happy to see a player get their payday, I don’t see it as an indictment on the Bears. At least, not right now.

•   Rams Defensive Coordinator Brandon Staley (who used to coach Bears OLBs) has a good thing going on in Los Angeles:

☄️Is the Rams defense sent from the future to terminate opposing offenses?
New DC Brandon Staley has created a wonderfully modern unit that I bet is going to be the blueprint for future defenses.
~The Rams are playing football in 2030~https://t.co/ejHqyF2rbb

•   OOF! I’m not looking forward to matching up with Alvin Kamara:

Alvin Kamara is averaging 15.7 fantasy points per game on his receiving stats alone — which is equivalent to the WR11 Allen Robinson (15.8) and WR12 Will Fuller (15.7).

•   I understand this reference:

•   Pretty sure I’ve never shared a mic’d up episode from another team, but I’m willing to make an exception for this one:

•   That we’re already looking at cancellations to college all-star prospect games makes me itchy. The East-West Shrine Game is one of those showcase games that gives unheralded prospects to shine and jump on someone’s radar. Games like that tend to unearth the late-round gems we love to obsess over. So with that in mind, I hope those players can find a way to make a name for themselves.