How Can You Not Love Akiem Hicks? And Other Bears Bullets Skip to content 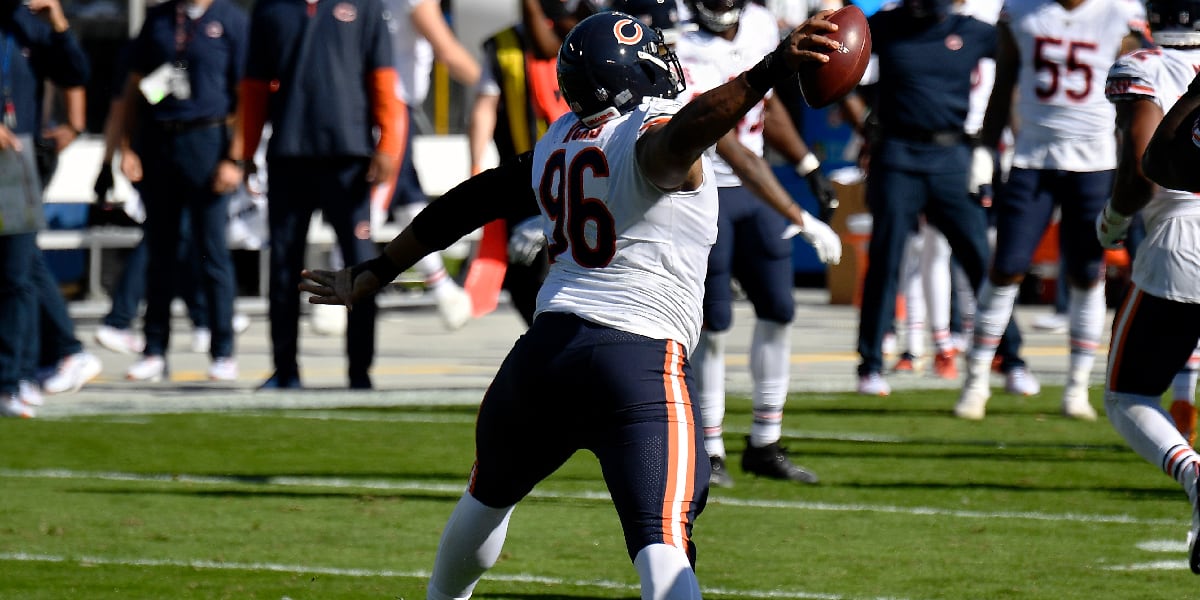 Get in, loser. We’re working on personal growth today.

•   You thought losing to the Rams was bad? OK, it was. But this feels far, far worse:

I wish that I had never seen this… pic.twitter.com/XiAwzMWTgX

•   I wanted to start this set of Bullets by commending all of you who responded to this tweet:

Let’s put some positive vibes out there. Tell me something you like about the 2020 Bears. Could be anything. Let’s hear it!

•   Losing sucks. And things can get really dark, particularly after a primetime loss. However, it’s important that we don’t let losses wear on us. Not with a team that’s 5-2. And certainly not on a short week when the Saints are set to march into Soldier Field. The struggles are real, to be sure. But this isn’t a squad that is without likable aspects. So let’s enjoy what we have while we can, then see how the cookie crumbles whenever that happens. Deal?

•   With that being said, my quest to get through yesterday riding only positive vibes ended when I had to write up the injury report. Four starters (Mack, Robinson, Whitehair, Paterson) did not practice due to injuries, while two others (Jackson, McManis) were limited. Part of me expected a longer list than we’re used to because of the quick turnaround from Monday, but this felt like a bit much. I’m curious as to how Matt Nagy addresses things today.

•   If Cody Whitehair (calf) can’t play, Sam Mustipher will take his place. And if that happens, here is what the Bears’ starting offensive line will look like from left to right: 7th-round pick (2014 draft), UDFA (2017) who is a converted nose tackle playing his third different offensive line spot in two years, UDFA (2019) with 26 snaps of professional experience, a converted right tackle on a one-year “prove it” deal, and a right tackle who grades out well by PFF’s standards, but is also coming off his worst year as a pro. In other words, this group isn’t striking fear into opposing defenders. Then again, that’s why they play the game. Go get ’em, gang.

•   As the offensive line rides the struggle bus, Andrew Dannehy (Da Bears Blog) serves up a reminder that the defense had its own issues on Monday Night Football. Even when they didn’t score early, the Rams sustained drives long enough to flip field position and pin the Bears’ offense deep in its own territory. Having real problems on offense, then needing to dig out from inside your own 20 seems unfair. Don’t think the defense doesn’t already know what its issues are. And don’t believe for one second they’re not plotting to right the ship against the Saints in a nationally televised TV slot on FOX.

•   For a palate-cleanser, here’s “Big Guys in a Benz” featuring ex-teammates Spice Adams and Lance Briggs:

•   How can you not love Akiem Hicks?

This is the most I’ve been penalized in my career. I’ll never complain, I’ll just adjust my game. But one thing I won’t do is not play hard. It’s part of why I fell in love with the game. The struggle, the hustle, the battle. I’m still in love pic.twitter.com/qbpNpRxVbx

I’m playing through a pandemic, what makes you think I won’t play through the whistle

•   Hicks has 3.5 sacks, 7 tackles-for-loss, and 11 quarterback hits in seven games. This puts him on pace for 8 sacks, 16 tackles-for-loss, and 25 QB Hits. In other words, that’s a whole lotta carnage in the opposing backfield. Hicks is everything you want a Bears player to be. He is an ultra-talented, hard-working, high-motor defender who is honest, raw, emotional, and passionate. Football needs more Akiem Hicks and I think we should appreciate him fully while he’s on our favorite team.

•   Well, at least some teams are making moves to be better:

While the #Bengals added OL BJ Finney this week, worth noting that’s not all: They are expected to sign former #Bills G Quinton Spain, who is going through COVID-19 protocols in Cincy now. https://t.co/fTSky0sOpJ

•   Dontari Poe was once viewed as a high-end defensive lineman. Those days appear to be well in his past. But if all else fails, the new free agent could help on the other side of the ball:

And if that doesn’t work out, he’s got #elite run-blocking skills. https://t.co/66ZbjqXIs0

•   The battle to play professional football in a pandemic continues, as the Giants announced they had a player test positive for COVID-19. Said player (and close contacts) have been sent home, leaving the team to follow its normal practice schedule at its facility.

•   Michael Cerami reminds us that baseball should be fun:

Our Reaction to the Blake Snell Decision Says a Lot About Us as Fans and Baseball as a Sport – https://t.co/7r7fFmQmMI pic.twitter.com/hxDpnBLv8E