The Bears Hurt Themselves in Crowded Playoff Picture (Twice), Stealing Mooney, QB Hits, and Other Bears Bullets Skip to content 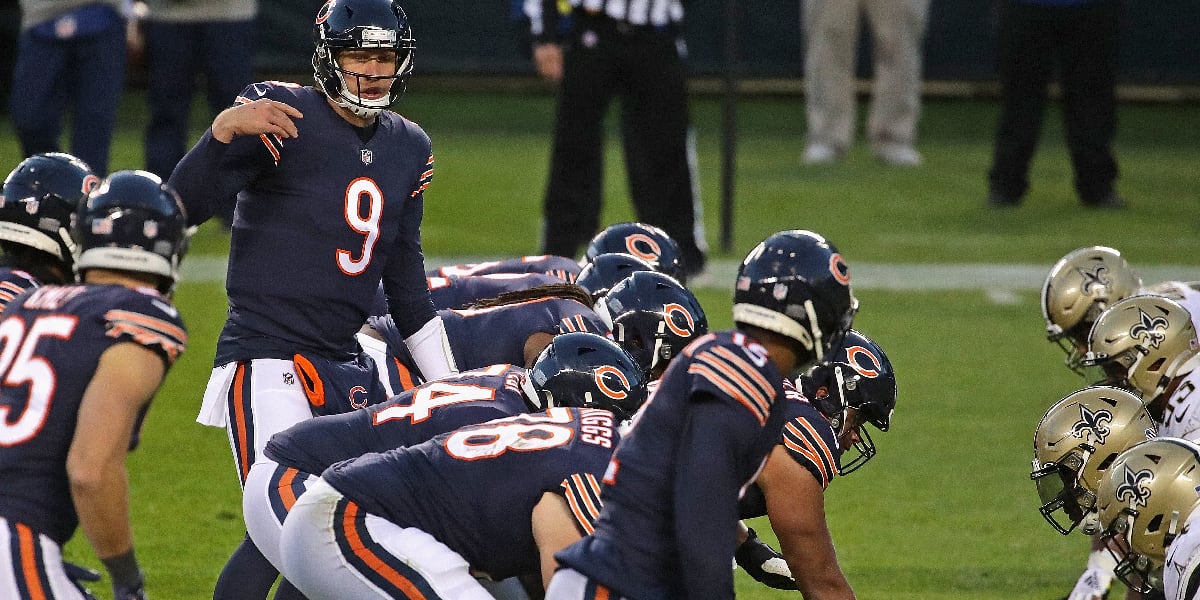 If you have already voted, then I tip my cap to you. But if you haven’t, and want to do so, today is your day.

And if you feel overwhelmed by anything (everything?) going on, just know that it’s OK to step away from your phone, tablet, or computer. Take a walk around the block. Step outside and breathe in some fresh air. Snuggle up on the couch for a power nap. Do you.

•   As soon as I saw this tweet and graphic, I knew nature was healing:

We're in the hunt. pic.twitter.com/xSNNUB2n7j

•   It’s officially autumn when I can use the #InTheHunt hashtag unironically. Then again, a whole bunch of teams can say the same. The Bears are joined by the Rams, Cardinals, Saints, 49ers, and (sigh) Lions as having a real shot at making the postseason. That the Bears lost two chances to gain a tie-breaker edge by flopping against the Rams and Saints hurts so, so, soooo much. And so much for the Cardinals beating the Seahawks being something that helped the Bears. Chicago no longer controls its own destiny, so it’ll need some help to get in at this point.

•   It’s a crowded playoff picture, to be sure. But one that could see one key rival fall off due to injuries:

The injury bug continues to hit the 49ers as QB Jimmy Garoppolo (ankle) and TE George Kittle (foot) will be sidelined for several weeks.

They have amassed 1,701 Rec yds together, the 5th-most by a QB-TE combo since Kittle came into the NFL and Garoppolo joined the 49ers in 2017. pic.twitter.com/ZFFUgPrmat

•   So are we pulling for the Packers to knock the Niners out of this discussion? Or are rooting for the Niners to up-end the Pack to give the Bears a better shot at the division? Hey, don’t give me that look. I invented that look!

•   And to think, more playoff spots could be coming:

•   I loved Antoine Winfield Jr.’s tape coming out of Minnesota, so it pains me to see something like this:

Every time Antoine Winfield Jr. makes a play, it makes me even more sad the #Bears didn’t take him at 43.

He made an incredible tackle here, and he just broke up a pass to save the game for Tampa Bay. pic.twitter.com/194LKh49wi

•   Winfield was an All-American do-it-all safety who I believed would work swimmingly with Eddie Jackson. Instead, the Bears drafted Cole Kmet. Now, don’t get it twisted … I’m not giving up on Kmet. Not right now. But you can’t blame me for dreaming on a lock-down secondary starring Winfield, Jackson, Kyle Fuller, and Jaylon Johnson. Especially when Kmet is playing minimal offensive snaps.

•   You’re not gonna hit homers with ever swing on draft weekend. So while the usage of the 43rd pick is still hotly debated, there’s no contesting the Bears got a steal snagging Darnell Mooney in Round 5:

Sounds like Bears receiver Darnell Mooney is a bit of a film ratt. Said he didn't get the opportunity to watch much tape in college, so is embracing it now with the Bears.

•   The hits allowed by this offensive line keep stacking up:

•   As was previously stated, the Bears’ offensive line issues go far beyond anything that happened this past weekend.

•   It’s frustrating that these issues didn’t pop up overnight. They’ve been lingering for quite some time. But save for some stretches of average-to-slightly-above-average play, the overwhelming consensus is that the play of the Bears’ offensive line has ranged from disappointing (on a good day) to flat-out bad (on its worst). And yet, nothing was done to address the situation. It’s maddening. But today is a good day to soften the blow by trading for some help.

•   Gotta love the attitude from Jimmy Graham. Now here’s to actions speaking even louder than tweets:

I wasn’t good enough. I Let my team, city amd myself down. I own it. I will be better.

"He's taken a new offense and learned it real quickly. He's don a good job when he's had the opportunity to catch the ball….The more versatile we can be in that role the more valuable we can be on offense," Dolphins TE coach George Godsey said about Adam Shaheen.

•   If anyone knows what it looks like to make the most out of a less-than-desirable quarterback situation, it’s Allen Robinson:

Darius Slayton has a bright future in this league!

•   Your daily disheartening offensive stat of the day, which is sponsored by no one:

At the halfway point of the season, Cordarrelle Patterson has 153 yards from scrimmage on 41 plays that have gone to him (26 runs, 15 targets).

He has had four gains of 10 yards or longer and 10 plays that have resulted in an incompletion, no gain or a loss.

•   The Titans beefed up their secondary ahead of the trade deadline, acquiring All-Pro slot corner/punt returner Desmond King in a trade with the Chargers. But as JJ Stankevitz (NBC Sports Chicago) points out, COVID-19 protocols could keep King from suiting up on game day. Keep that in mind as the Bears maneuver in the trade market.

Statement from the Broncos: pic.twitter.com/PPYuJQedZN