Akiem Hicks is Transforming into a Real Bear, Cordarrelle Patterson's GM Dreams, and Other Bears Bullets Skip to content 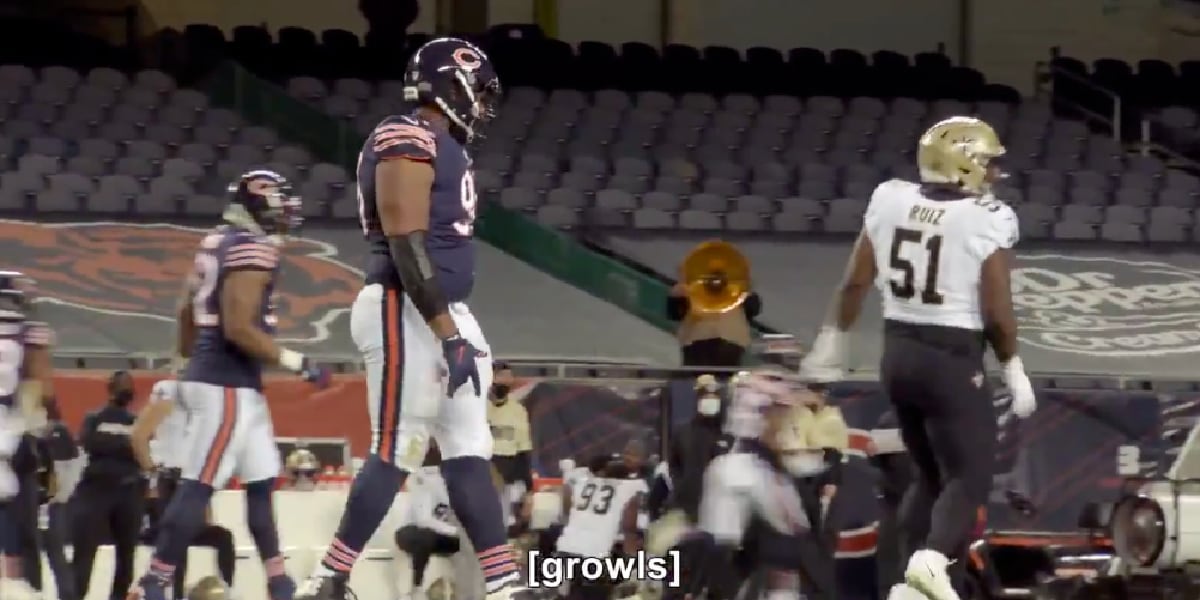 Power ranking the best of the leftover Halloween candy based on how each piece tastes after 24 hours of refrigeration: Resse’s Cups, Kit-Kats, Baby Ruth, and Butterfingers are your top four seeds. And based on the bowls of candy on my dining room table, more tests will be conducted soon.

•   Akiem Hicks’ transformation from Chicago Bears star to an actual bear is nearly complete. Sound on:

•   Hicks collected two solo tackles, one quarterback hit, and countless growls in the Bears’ Week 8 loss to the Saints. Stats aside, there’s no more entertaining player to watch on Chicago’s defense than Hicks — right? Non-stop motor, top-tier talent, and sound effects make him a must-see on the must-watch list.

•  Just listen to this growl:

•   I’m wary of endorsing anyone these days, but Cordarrelle Patterson has made an enticing case to be in someone’s front office when his playing days are over. And on Wednesday night, he threw his hat in the ring for a job to be had at a later date:

•   Some might laugh at this because it’s pretty wild to see a player in his prime discussing their future in a front office. Others might brush it off as Twitter talk. But from where I’m sitting, I don’t need to squint to see Patterson running a front office one day. I always say I’ll never bet against hard work. And for someone to wear as many hats as Patterson does, you need to be on that grind. All things considered, I’m not betting against Patterson being a GM one day — even if the odds aren’t in his favor at this particular moment.

•   You can’t say he doesn’t have his priorities in line:

•   The last time the Bears were in Nashville for a regular season game, Charles “Peanut” Tillman forced four – yes, Tom Brady – four fumbles against the Titans. I’d be OK with history repeating itself here:

Which non championship Chicago sports team was your favorite?

NEWS: Urban Meyer, Matt Leinart, Reggie Bush, Brady Quinn & Rob Stone are all out this Saturday due to COVID protocols, The Post has learned.https://t.co/ysETe2FfGw

•   This will be worth keeping tabs on:

Some opt-out guys opting into the 2021 @seniorbowl this week. Announcements coming…

•   Even if we get through a full college football season, there is still a chance we won’t get an NFL Scouting Combine in the winter. And if that’s how the cookie crumbles, teams will be forced to adjust how they put together their draft boards. HOWEVER, this is where a game such as the Senior Bowl could be helpful in the evaluation process.

No disciplinary action placed on Bears WR Javon Wims from the Bears. Matt Nagy says that's something they're discussing internally.

•   Phones, clothes, vacuums, coffee machines, cameras, and much more are your Deals of the Day at Amazon. #ad

•   How is basketball coming back so soon?

The Players Association Is on the Verge of Approving a Pre-Christmas Start to the Next NBA Seasonhttps://t.co/LoUkKROlkL

•   My favorite baseball player who isn’t on my favorite team is being dangled in trade talks: