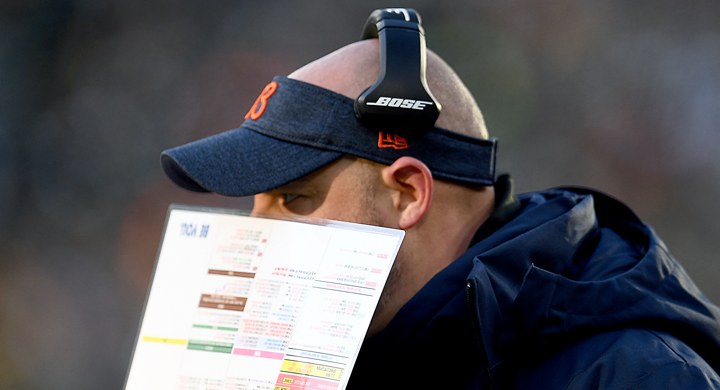 Thirteen days ago, Matt Nagy sounded like he was almost ready to *consider* giving up play-calling duties.

The Bears were in a rut. It was an offense with a line that was missing blocks left and right. When the line was doing its job, the quarterback was making poor reads. And even when he made the right read, there were too many bad throws, thus, making the good read utterly pointless. Personnel usage was weird and highly questionable. Ultimately, the play-calling was deemed ineffective by objective minds watching the game.

And yet, here were are, 13 days later feeling like it’s Groundhog’s Day all over again.

But perhaps Nagy, who has previously brushed off calls to hand over play-calling duties when his offense slumped, is ready to take the next step:

Matt Nagy asked how far he’d be willing to go to get better including the idea of sharing play-calling: “everything is on the table, and when I say that, everything. We’ll talk about everything as a staff and see where that takes us. “. @WBBMNewsradio @JoshLissSports

I guess I’m happy about the progress, but …. Are we seriously having a committee on this right now? Are we really doing this?

Nick Foles already has problems getting plays in, relaying them, and lining up players in the proper spots. So I feel as if having shared play-calling duties would only make more of a clutter on the offensive side of the ball. This offense needs clarity and a streamlined approach, not a college of coaches deciding what the call is for the next play.

At least part of me is encouraged by the idea that “everything is on the table” for Nagy and his staff. Then again, I’ll believe it when I see it.

Here’s Nagy’s answer when he last fielded a question about stepping away from play-calling duties:

I asked Matt Nagy if he would consider relinquishing the Bears' play-calling duties. He will continue on for now, but spoke honestly about why he would be willing to do so. pic.twitter.com/KwAAyClSfM

Nagy comes off as a football junkie with knowledge of the game’s history. So he should remember that getting his shot as a play-caller when Andy Reid owned up to some in-season short-comings. And that successful transition of power launched Nagy’s profile as a head-coaching prospect.

Because there’s a precedent set by a mentor he tries to copycat at every turn, then perhaps Nagy will actually follow through. Offensive Coordinator Bill Lazor, Passing Game Coordinator Dave Ragone, or even Quarterbacks Coach John DeFilippo should be on standby. Although, to be clear, shared duties between any number of coaches probably has disaster written all over it.

On the other hand, I suppose there’s nowhere to go from here but up.