The Offense They Don't Have, the QBs They Missed, the Line That's Left, and Other Bears Bullets Skip to content 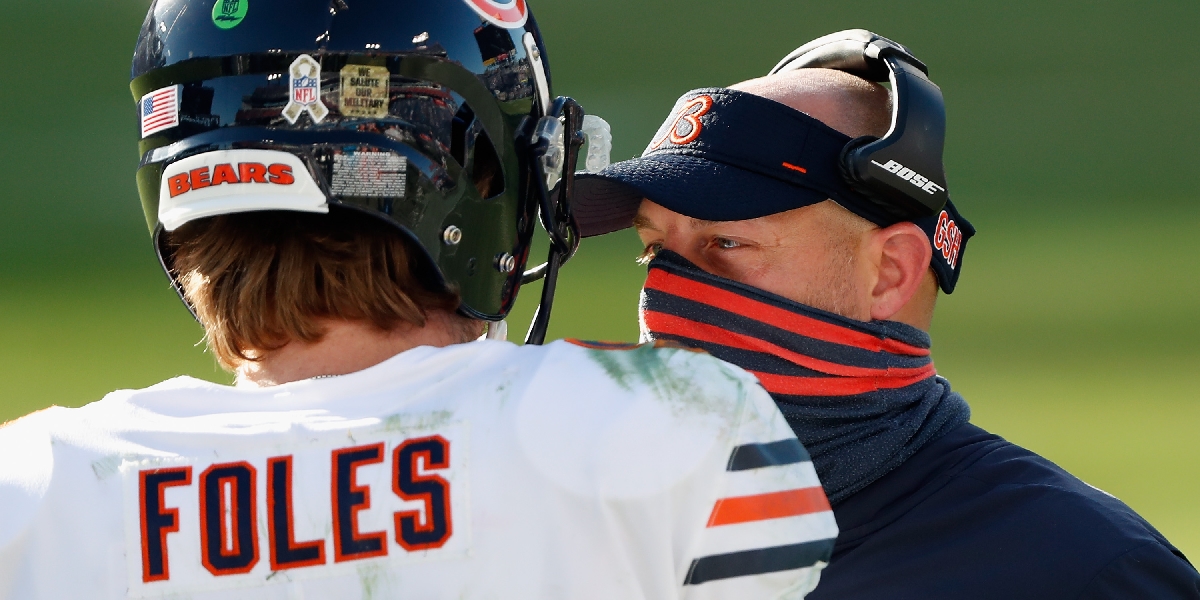 I got a taste of the Red Zone Channel yesterday, and it changed my perception of a great many things.

•   Watching other teams play offense after watching the Bears’ futile attempts to play what they consider to be offense is a mind-boggling experience. The route concepts. Blocking schemes. Running lanes. Chunk plays. It’s all designed to enflame the senses. There were moments I felt over-stimulated. It was like watching color TV after living in black-and-white. Seeing how the other side lives was quite the tease. And yet, I want more than that small bite of the apple.

•   Two quarterbacks the Bears reportedly had interest in acquiring had a helluva duel on Sunday:

TEDDY BRIDGEWATER GOING FOR IT ALL.

•   No, I didn’t spend my Sunday afternoon checking in on the ones who got away. I definitely did no such thing. Why would you even suggest a thing like that?

•   I’m not going to make this set Bullets all about missed opportunities. That would be toxic and unhealthy. So here’s something to cheer about:

You always remember your first. Welcome to the end zone, Ryan Nall!pic.twitter.com/ErP2v3Wq7N

•   Undrafted free agent scores first NFL touchdown will always put a smile on my face. Whether his team is up (or down) on the scoreboard matters not. I hope Ryan Nall remembers this moment forever. But also, I hope he gets more opportunities to score touchdowns because he might get them if David Montgomery doesn’t clear concussion protocol by the time the Bears play next Monday.

•   UGH. I hate how I can’t watch that highlight without thinking about how even the scoring plays are incredibly difficult. Everything Chicago does on offense is like a taffy pull. It takes max effort and near-perfect everything to get that kind of score. Unbelievable. And that’s saying nothing of how it took nearly 2 hours and 25 minutes in real time (or almost 47 minutes in game-time, if you want to feel better) to score a field goal against a defense that was torched by the Bengals last week. COME ON.

The lights have gone out during Matt Nagy's postgame presser.

•   I momentarily turned over tweeting at @BN_Bears and the immediate fallout was two false start penalties and a punt after putting together some semblance of offensive life. Offensive line penalties are drive killers, to be sure. And while I expected them from Alex Bars, Arlington Hambright, and (to a lesser extent) Rashaad Coward, I should’ve known better than to believe Charles Leno Jr. and Germain Ifedi would be immune to it. The veteran linemen did not play up to their standards or potential. Full stop.

•   And yet, that’s what the Bears might be stuck with for the time being. Right tackle Bobby Massie and left guard James Daniels are on IR. Center Cody Whitehair had a calf injury before landing on the reserve/COVID-19 list. Replacement center Sam Mustipher is nursing a knee injury that kept him out of Sunday’s game. And it’s not as if the NFL’s COVID protocols are going to be relaxed in order to get some healthy guys into the building, so quick fixes  shouldn’t be expected. It’s a mess.

•   Sometimes I bookmark things to read them later, but never get around to it. So in an attempt to do so, I’m sharing here as a reminder to follow through on things you say you’re going to do:

Pete Carroll’s new contract is believed to be a five-year extension that makes him one of, if not the, highest-paid head coach in the NFL. https://t.co/evXG9emw6I

•   Hallmark holiday stuff, toys, speakers, anime, tools, clothes, and more are among your Deals of the Day at Amazon. #ad

10 days until the NBA Draft ❤️

•   And so is baseball season:

Dare we start the countdown? pic.twitter.com/ZKJbu0xbOn