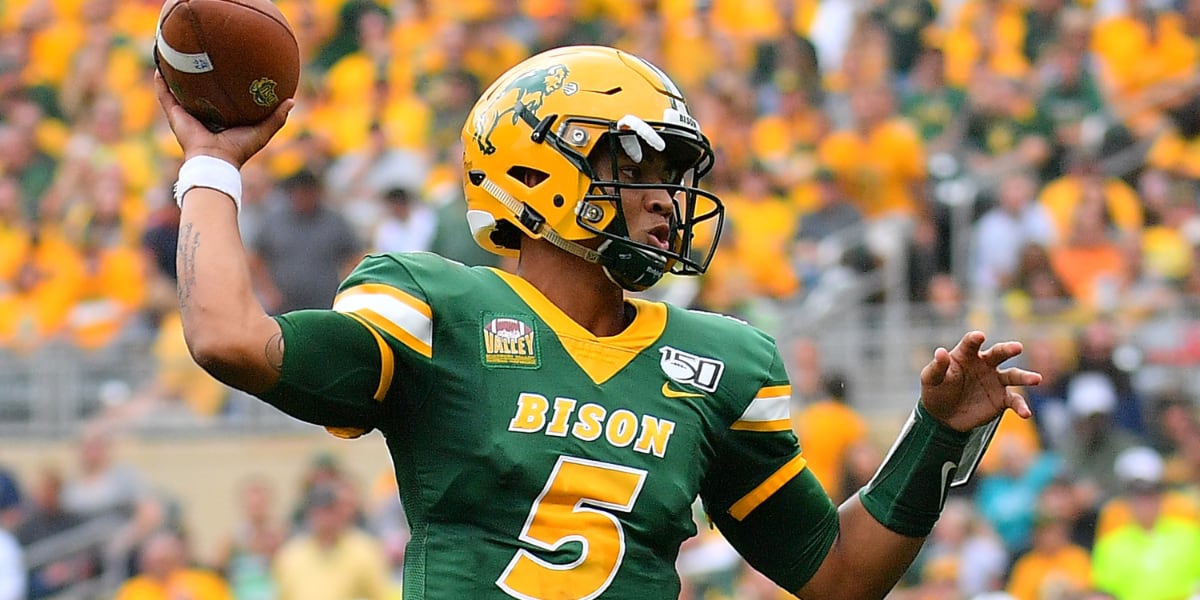 Even though the Bears (5-4) are technically in the thick of an expanded playoff hunt, I can’t help but look to the horizon for something better. Because even if they manage to shake off the three-game losing streak and reassert themselves in the NFC, Chicago’s apparent competitive window – which they believed opened in 2018 – is shutting more quickly than expected.

So with that in mind, I find myself peeking at Dane Brugler’s updated list of top 2021 NFL Draft-eligible prospects:

10 new names added from the preseason top-50, including two quarterbacks.

Brugler’s breakdown of the top-50 draft-eligible prospects is an enlightening look that provides a peek at skill position players on both sides of the ball, many of whom could be impact players upon arrival. There are certainly a number of pass-catchers, defenders, blockers, and others who are worthy of further exploration. HOWEVER, it’s all about the quarterbacks, baby!

Let’s discuss the five who land in Brugler’s top-50, as well as the likelihood of the Bears landing one of them.

Lawrence is the slam-dunk choice to be the first player and quarterback taken. He checks all the boxes from frame, prospect pedigree, production, and excellence in big-game situations. Armed with throwing talent, accuracy, good decision-making, and mobility, Lawrence is going to make some franchise very happy for quite some time.

So You’re Saying There’s a Chance: LOL, no. The Bears won’t be bad enough to draft Lawrence, even if they lose out. But because I encourage folks to dream the biggest dreams, here goes nothing:

Good morning to the most creative path to #DaBears next great competitive window! https://t.co/Ac5o3csUFN

In the unlikely scenario where Lawrence opts to return for his senior year at Clemson, Fields would be the obvious QB1. Heck, I think there is an argument for him to be the top-ranked quarterback in this class anyway. With Lawrence missing two games after his positive COVID-19 test, Fields has jumped to the top of the Heisman race. And with good reason.

So You’re Saying There’s a Chance: It’s difficult to imagine the team that misses out on the opportunity to draft Lawrence will pass on selecting Fields. And even though I don’t want to rule out any possibility, it’s tough to envision a successful trade-up to draft Fields. Although, I wouldn’t be against it.

The story of the NFL Draft process thus far has been the ascension of Wilson. The competition on BYU’s schedule doesn’t get evaluators excited, but his library of throws, which I wrote about in October, is why he is in the top-10 conversation. His outstanding instincts, arm talent and accuracy have NFL teams buzzing. Some around the league believe he could go higher than sixth.

I’m hesitant to drop a Patrick Mahomes comparison without using a litany of caveats. So when I suggest that a team that watches Wilson sees an opportunity to trade up because they see the off-platform throws, unique play-making ability, eye-opening athleticism, and smile-inducing swagger, it’s because that’s exactly what happened in 2017. It also happened a year later when the Ravens traded back into the first round to draft Lamar Jackson. Just saying.

So You’re Saying There’s a Chance: Wilson might represent the best chance for a trade-up opportunity for a team like the Bears. It comes with considerable risk, but also a tremendous reward with the proper commitment to player and team development.

Lance has been a favorite prospect of mine for a while. And when NFL Network draft guru Daniel Jeremiah suggested that Lance could be the best of the bunch, my eyes widened to the size of saucers. His description of Lance is so tantalizing

“He can make every play, with his arm and with his legs. He’s the best decision-maker by far, and that’s referenced and you can see the lack of turnovers. He’s selectively aggressive, so when there’s time to take shots he’s not going to be Checkdown Charlie. He’ll push the ball vertically down the field. And so I look at poise, decision-making, accuracy, play-making ability, toughness — he’s literally off the charts in all five of those key areas. To me, he was the most impressive of the bunch.”

It’s unfortunate that Lance’s showcase game didn’t live up to the hype. But even still … there’s plenty of buzz around him entering this draft class.

So You’re Saying There’s a Chance: Trading up for Lance is probably the most realistic option for the Bears. And based on Lance’s loud set of tools, he might be the most enticing, too. If the Bears were confident and committed to a slow roll-out and development plan, much like what the Chiefs did with Mahomes in 2017 going into 2018, then the dice roll could pay off in a big way.

Evaluating Jones is one of the most unique pre-draft challenges. He plays in a pro-style offense, with pro-ready blockers, rushers, and pass-catchers, and for Nick Saban, who might as well be a pro coach. But I’m not convinced Jones is a product of his environment. Jones throws a pretty deep ball, processes SEC defenses at a high level, minimizes mistakes, and often puts the ball where his playmakers can do damage. All of that little stuff matters, and don’t let anyone tell you different.

So You’re Saying There’s a Chance: Unless the Bears bottom out, Jones represents the most realistic options. It’s easy to envision a quarterback like Jones as being good enough to be the bridge quarterback for a franchise that wants to kick the can down the road and take a shot at a higher-profile prospect later.

This won’t be Brugler’s last prospect update. But for the time being, it’s the most intriguing.