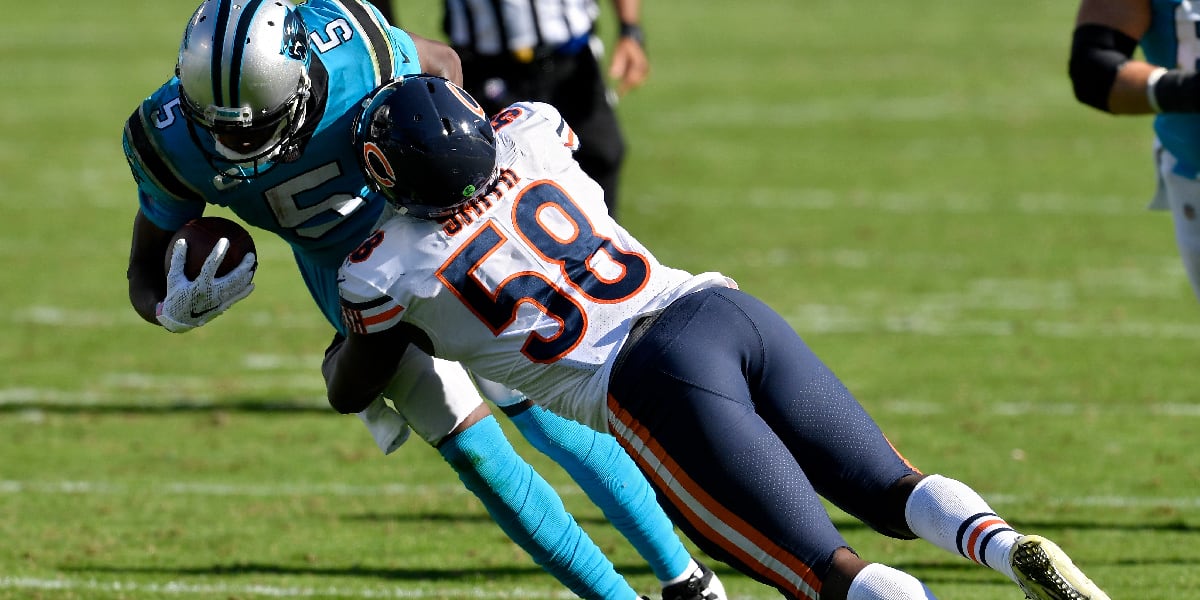 There is an eight-song stretch on Kanye West’s “Graduation” album that starts with “Stronger” and ends with “Everything I Am” that is so powerful, it gave me the energy to get out of bed and write Bullets today.

•   If the season ended today, the Bears would be IN the playoffs as the NFC’s eighth seed:

•   If the Bears made the playoffs, I’d be curious to see how I’d re-visit today’s dive into the logistics if the Bears wanted to make real changes at the top. Would sneaking in as the eighth seed be enough for management to give Ryan Pace and Matt Nagy a chance to maximize what appears to be a fast-closing window? Or does the big picture look murky enough to cut ties with a GM who would enter a lame-duck year in 2021 and a head coach who hasn’t lived up to his pre-hire hype.

•   While sorting through old posts that helped me put together the content linked above, I stumbled across some eye-opening stuff from before the 2018 College Football Championship Game. I highlighted four prospects to watch while keeping in mind the Bears’ needs ahead of the 2018 NFL Draft. If you’ll recall, the Bears had a top-10 pick. And I had my eyes on some good ones. Alabama DB Minkah Fitzpatrick was a two-time All-American who had been deployed in 19 different spots on the Crimson Tide defense. Fitzpatrick is a budding defensive star for the Steelers. Calvin Ridley was on the Bears’ radar during the pre-draft process. Ridley is having a breakout season with the Falcons, and is on pace for an 86-catch, 1,314-yard, 12-touchdown season.

•   I probably could’ve run through more Alabama guys, but Georgia had talent, too. Isaiah Wynn has locked down the Patriots’ starting left tackle position. And last but not least, LB Roquan Smith is having his best year as a pro in Chicago. If anyone needs me, I’ll be taking my victory lap now. And if the Bears need me for consulting purposes, my DMs are open.

“[T]he ability to provide impact as a receiver and rusher should make the Bears’ offense less predictable whenever he’s in the formation. The unpredictability factor can go a long way in Matt Nagy’s scheme.”

•   I’m only mildly annoyed that the Bears added tough-to-tackle running backs in 2019 as part of a changing philosophy, then misused them.

•   On the other side of the ball, Chicago’s rotational defensive linemen continue to present a pleasant surprise:

•   File this under, Sometimes, A Headline Tells You Everything You Need to Know: How bad play calling, execution sunk offense vs. Titans is the title of the JJ Stankevitz/Adam Hoge Bears film review post for this week. Give it some time out of your day. But be prepared to be frustrated by re-living the same offensive mistakes that have been happening since at least Week 3.

•   The Bears’ annual coat drive is a rousing success year after year because good people exist in the world and give back to their communities. I would like to take this moment to encourage you to continue to do good for others:

•   Did you know it was even legal to throw the ball this far down field?

•   Chargers, toys, Harry Potter, and much more are your Deals of the Day at Amazon. #ad

NBA Draft Rumor: One of Anthony Edwards or LaMelo Ball Might Drop to the Bullshttps://t.co/gjaVjnvy5t

Jason McLeod Is One of the Five Finalists for the Angels GM Vacancy – https://t.co/z21U0QIWtZ pic.twitter.com/1i9R8Y5zVz