The State of Things: Allen Robinson "Liked" Tweets From Fans of Other Teams Asking Him to Join Them Skip to content

It was rough for Mitchell Trubisky, Matt Nagy (no matter what he says), and Ryan Pace – as any five-game losing streak would be coming out of a bye, against your biggest rival, ostensibly with playoff aspirations (and jobs) on the line. But it was also rough for us, the fans, who were given just the smallest taste of success in 2018, before it was ripped away from us one doink at a time.

But now, what are we left with? All three men to which we handed over so many of our hopes are on the hot seat, Khalil Mack is about to turn 30 (and stay expensive), the offensive line is in shambles, and the brightest offensive spark, Allen Robinson, is five games away from free agency with no extension in place.

Speaking of Allen Robinson … oof. I do not like the way things are going in the relationship.

Sure, the Bears No. 1 receiver had the second-most targets (13), third most receptions (8), and most touchdowns (2) for any single game this year, but it sure seems like it was too little, too late. The embarrassment on the field and disrespect from the franchise on the dotted line has reached a boiling point for Robinson, and things already weren’t good.

Just take a look at some of the Tweets he liked last night after the game: 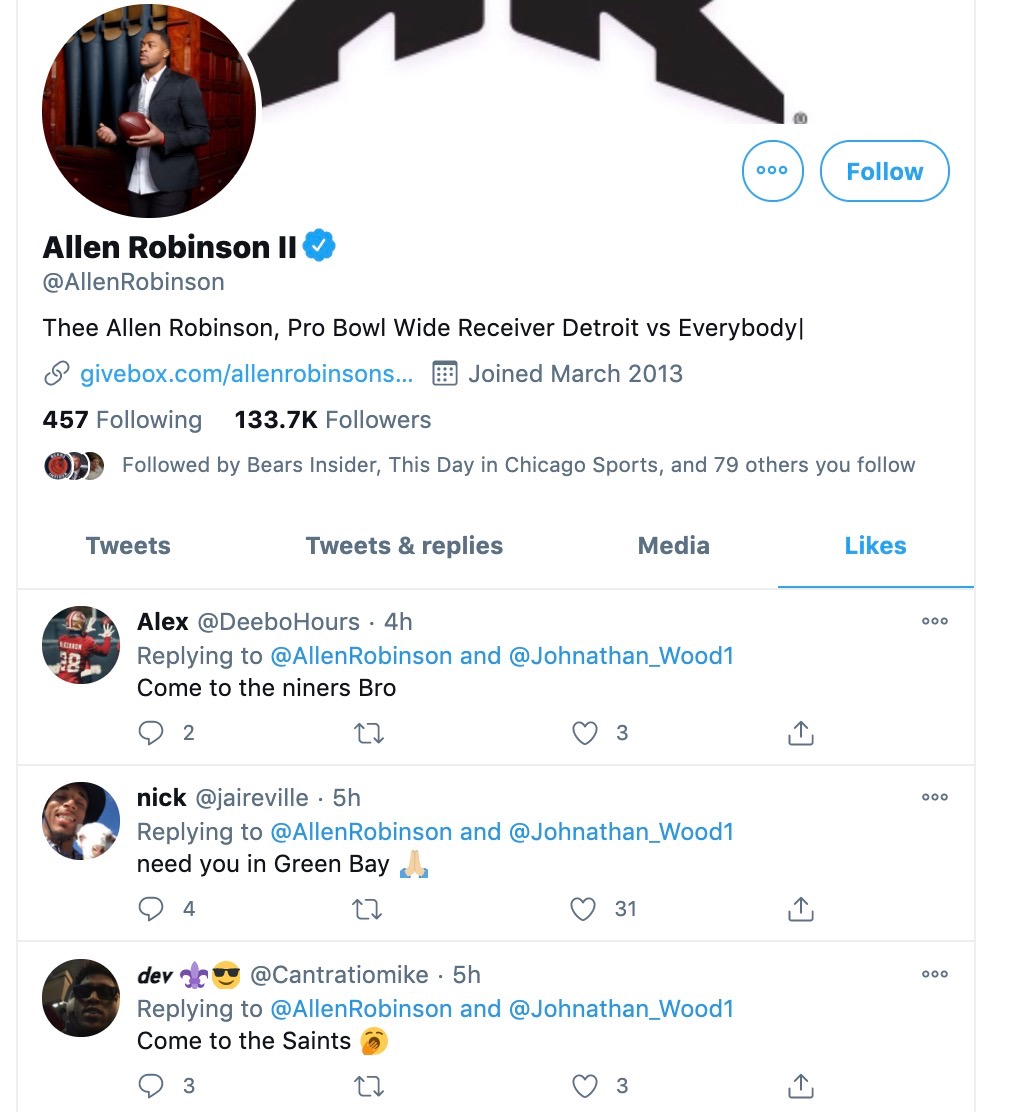 Excuse me while I vomit picturing Allen Robinson in Green and Yellow.

For what it’s worth, the Bears receiver has since unliked each of those Tweets, but the likes happened. And while some post-game, social-media frustration hardly means Robinson is ready to pack his bags and leave Chicago, it’s pretty tough to figure out how exactly the Bears are working to make him stay. In fact you don’t even have to read in between the lines. Robinson has clearly begun to feel unwelcome.

There was that time …

Throw in the fact that the Bears quarterback situation is a mess, and, because of their draft position, very few options to add one in the short-term, and it’s like, yeah … why wouldn’t Robinson like tweets about New Orleans, Green Bay, and San Francisco? The grass has to be greener somewhere else, right?

And as if all of that weren’t enough, the one thing the Bears COULD do for their best offensive player – show him the money – they have clearly been avoiding, to the point where even Robinson isn’t looking for a deal anymore. This is where things are. This is how far things have gone. I actually understand why Robinson would like Tweets like that, even though I hate the implication.

And, sure, the team could always tag him (or tag him and trade him) at the end of the year, but at this point, I’m not even sure what’s best for all parties. The Bears might just let him walk and that could be the end of that. A perfectly great receiver, happy to stay in Chicago until he was misused, poorly built around, pissed off, and set on course to another city. The Bears will get a comp pick, but that’s hardly much in the way of solace.