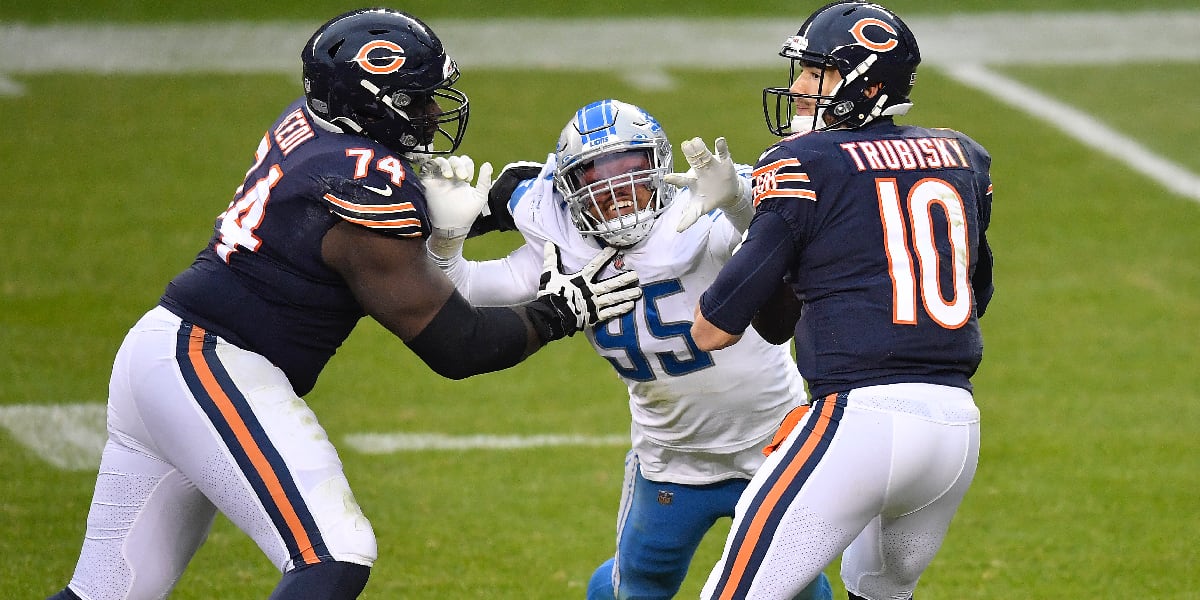 Get in, losers. We’re going tanking.

•   We can pick apart every little thing that went wrong on Sunday. And when a team blows a 10-point lead in a matter of late, fourth-quarter moments against this Lions team, there’s plenty to choose from. But I found myself going back to the place it went wrong first and went wrong most: the trenches. Offensive line. Defensive line. That’s where games are won. And in the end, it’s where Sunday’s debacle was lost.

•   When the game was on the line, right tackle Germain Ifedi couldn’t contain a speed rusher on a drop-back that could have sealed the game. A one-on-one battle was lost in the most costly manner. Could Mitchell Trubisky have done a better job in securing the ball? Absolutely. Is Matt Nagy at fault for calling for a deep drop on a 3rd-and-4 situation? Definitely. But that moment ultimately comes down to execution at the point of attack.

•   Then, when given a chance at redemption, the offensive line couldn’t generate a push to get one stinkin’ yard on 4th-and-1 with the game hanging in the balance. One friggin’ yard. That’s it. Get a yard, use your final timeout, draw up some plays that will get you out of bounds or in the end zone, and giddy up. Instead, this happened:

•   Last week, Nagy talked about his defense needing to play with pride. Today, he should turn to the mirror and have that conversation with himself. After that, he should discuss it with the big uglies up front. Because those two moments were absolute game-changers.

Oh my 👀👀👀. Watch the finish by Ragnow (77) pic.twitter.com/HRqOaqeeee

•   Nothing like watching the Lions offensive line push the Bears on their heels, changing the point of attack, and allowing Adrian Peterson to rumble into the end zone. I might throw a party when Peterson retires, because I’ve long grown tired of watching him have his way with Chicago’s defenses. B.Y.OB. and I’ll provide the meats.

•    One more loss at the point of attack for good measure:

Coward got blown up on that extra-point attempt. pic.twitter.com/aBz23HRRYJ

•   Rashaad Coward has had a *rough* year, to say the least. He struggled at left guard, then couldn’t cut it at right tackle. Then this happens on special teams? OUCH. When your margin of error is razor thin, every point matters. So while a blocked extra point might otherwise get forgotten in the grand scheme of things, it shouldn’t.

•   The Bears’ solution to their long-standing offensive line problems was to sign a converted tackle to play guard signed away from a team that needed line help as much (if not more) than the Bears, a failed second-round pick who busted in Green Bay, a converted nose tackle, and a second-year undrafted free agent. And that’s how games can get lost in the trenches.

•   Circling back to special teams, this was one of the most mind-blowing coaching decisions of yesterday’s game:

A great point from @AdamHoge on yesterday's collapse

Lions kicking off after their TD. Still have 2-minute warning and all 3 timeouts

Bears put Cordarrelle Patterson up on a hands team assignment (???) for an onside kick, leaving Mooney back with no blocking pic.twitter.com/6pKNt2u52X

•   What was even the point of this? It looked like Darnell Mooney was instructed to get down immediately, which gave up a whole chunk of field position. Why was Mooney even back there if he wasn’t trusted to field and return the kick? Shouldn’t Patterson have been back there instead with Mooney on the “hands” team? Was this a case of overthinking or not thinking it through enough? I do not have the slightest clue as to what the answer is to that question.

•   There was a case to be made that the special teams was a strength because it had been minimizing mistakes and performing at a relatively superb level. But two huge mistakes that were part of a soul-crushing loss can’t be ignored.

On the three possessions after Bilal Nichols’ interception, the Bears gained 10 yards of offense, punted twice and turned it over while the defense gave up 14 points.

How they let it get away, extending the losing streak to six https://t.co/UbesMo9hme

•   Losses like the one we saw yesterday is reason enough as to why there’s plenty of talk about Pat Fitzgerald today:

REPORT: Bears Likely to Make a Head Coaching Change, and Pat Fitzgerald is the Target https://t.co/PgrXk1GN86

⁦@thekapman⁩, ⁦@KingsleyEllis⁩ and I look at what’s next for a #Bears team that’s primed for a housecleaning…but will it happen now or later? https://t.co/bySDrksBeW

•   Sunglasses, snow blowers, phones, and game tables are among your Deals of the Day at Amazon. #ad

•   Deshaun Watson is gonna take it all out on the Bears on Sunday, isn’t he?

Deshaun Watson asked about being filmed after game sitting on bench: "This shit hurts. I'm tired of losing. Being so close over the years has just … yeah, I mean, it's just … it's tough. Tough." pic.twitter.com/OkwMAXUGXQ

•   I can’t believe the Jets fired their own tank commander: