Fourth and One and I'm Still Mad ... And Other Bears Bullets Skip to content

This thorough breakdown of Coastal Carolina players roughing up BYU quarterback Zach Wilson is something you didn’t know you needed until right now:

•   This image might as well be tattooed inside my eyelids: 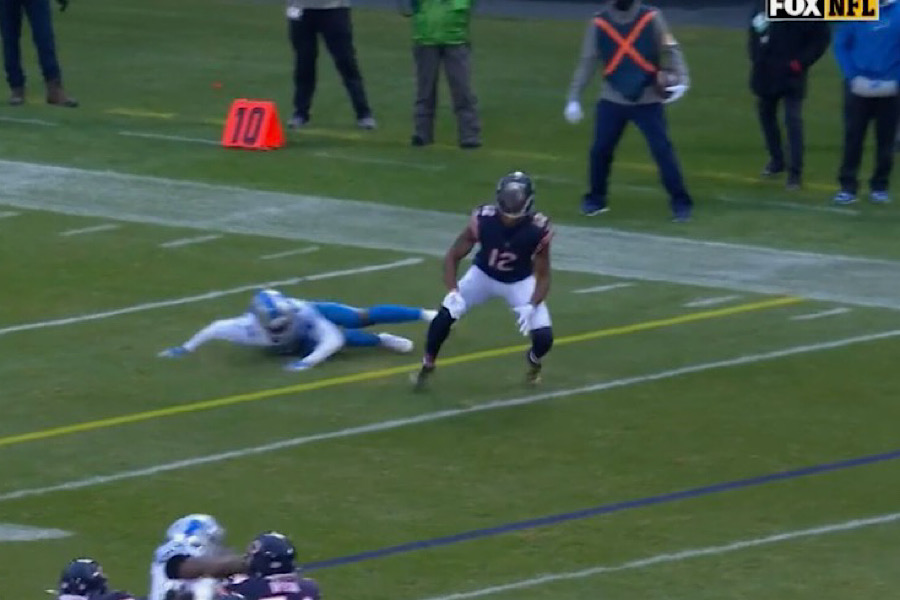 •   If you asked me what the end result of the screenshot above, I would’ve never guessed it would’ve been 4th-and-1. Not in a million years. I see that snapshot and envision a first down, then a touchdown. A moment in which Robinson hurdles over a fallen Lions defender and coasts into the end zone for the game-winning score. In my wildest dreams, it would’ve been the Bears-Lions version of Allen Iverson’s step-over on Tyronn Lue in the 2001 NBA Finals. It should have been the latest chapter in Lions misery. Detroit hadn’t beaten Chicago in 1,086 days prior to Sunday’s triumph. And as far as I’m concerned, that streak should still be ongoing. That it isn’t is an embarrassment.

•   This hurts because we expect better from Robinson. And I don’t think I’m stretching to believe that Robinson expects better from himself. Big money players finish the play and extend the drive. Robinson has been a big-money player since putting on a Bears uniform. That play shouldn’t take away from what he’s done since arriving in Chicago. But that moment can’t happen.

•   What’s most annoying about that play is how it is awfully symbolic of what the Bears have become since the end of the 2018 season. The last 28 games has featured a revolving door of high-profile mistakes in big moments made by players and coaches you expect to do better. Missed throws. Dropped passes. Field goal whiffs. Punt muffing. Missed tackles. A bad play-calling sequence on offense. Defensive miscommunication. No one has been immune, as even the most reliable and dependable players have fallen victim to it. Who saw any of this coming?

•   And because the Bears lost, Mitchell Trubisky being one of the best quarterbacks in Week 13 gets lost in the shuffle:

•   Lost in the utter collapse of Chicago’s defense when the team needed it to shine the most was Trubisky’s statistically solid play. He completed 76.4 percent of his passes, averaged 7.9 yards per throw, finished with 267 passing yards, and a 108.3 passer rating. It was Trubisky’s first game with a passer rating north of 100 since Week 1 against the Lions. And before that, Trubisky hadn’t put together a game with a passer rating of 100 or better since Week 14 of the 2019 season against Dallas. If only Trubisky could be the quarterback he is against the Lions when he faces every team.

•   Also lost in the madness was an awesome interception by Bilal Nichols:

•   Nichols looked like the intended target on this play. That’s how well covered it was, which is a testament to Nichols. And the post-pick spike looked like something you’d see from an offensive player well-versed in celebration. Maybe if the Bears got to the red zone more often, they could use Nichols on a gadget play like they did with Akiem Hicks or Bradley Sowell back in 2018. Then again, maybe the Bears are better off trying to get the little things right on offense first.

•   I can’t believe the Bears offense scored 30 points … AND LOST. That still hurts.

•   Something to listen to on your Tuesday:

•   A whole bunch of Amazon devices are on big discounts today, so peruse away. #ad

•   Josh Allen is making the third-year leap we hoped Mitchell Trubisky would take:

•   I’m not fond of the ’72 Dolphins’ champagne celebrations. But if it was poppin’ off last night, I hope it was done in a socially distanced manner:

•   This isn’t a headline I expected to ever read:

UNLV QB Max Gilliam issued an apology for eating sushi off of a nude model on a reality TV show.