One Unexpected Improvement, DeVonta Smith Wins the Heisman, Help From Halas, and Other Bears Bullets Skip to content 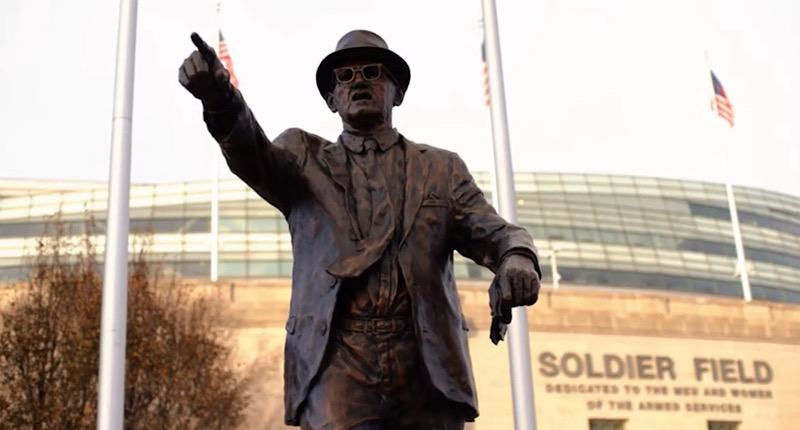 I know what today is. So do you. With that being said – or in this case, unsaid – we’re not gonna bring it up.

Let the past die. Kill it (figuratively speaking, of course) if you must.

•   A meme has been circulating asking: “If your team is in the NFL playoffs, and you have the chance to bring back one (1) offensive and one (1) defensive player for the postseason, who are you bringing back?” And while I won’t say I lost sleep over it, I woke up thinking about the idea this morning.

•   For the Bears, it’s easy. I’m bringing back linebacker Dick Butkus, especially with Roquan Smith’s health up-in-the-air ahead of Sunday’s game agains the Saints. On offense, Walter Payton returns to quarterback an option offense featuring him and David Montgomery. Good luck stopping that!

•   We can point to improvements on the offensive line, an ability to take advantage of sub-par opponents, and the Cardinals’ collapse as reasons as to why the Bears are in the playoffs. But then there’s this:

•   WELP. I can’t say I saw that coming. Teams don’t generally get more disciplined during their most trying times. But the Bears closing the year committing nearly half as many penalties as they did in the first eight games is impressive.

•   Let’s not overlook the importance of playing disciplined football. Penalties add up into lost yards on the offensive side of the ball. And because we have seen how this offense performs when put behind the sticks, we know how important it is to limit penalties on that side of the ball. On defense, penalties give away free yards and extend opponents’ drives. I can’t help but think a small part of the reason as to why the Bears’ defense is struggling the way it is has to do with how much time they’ve spent on the field in recent years. There’s only so much that group can take before regression makes its presence felt. Here’s hoping a rebound is in order, as I’d like to tell the regression monster to go kick rocks.

•   Kay Adams has her priorities in order, even if she is totally overlooking the Bears in the process:

•   How rude of Michael Thomas to do this to a fellow Michael:

So you're telling me Michael Thomas is going to single-handedly ruin my entire fantasy football season, then come back to kick the Bears out of the playoffs?

•   I had a ton of fun last night with PFF’s Mock Draft simulator:

"They don't call me #TraderLu because I'm some dumb-ass Army guy." pic.twitter.com/93z826Kez3

Who do the Bears need most now? George Halas, of course. https://t.co/KowDT67EdQ

•   Alabama’s DeVonta Smith became the first receiver to win the Heisman Trophy in 29 years. And with moves like this, you can see why:

The Texans job is actually hilarious.

No draft prospects, no money to spend, but you have the golden goose in Deshaun Watson who was a top 3-4 QB this year and is the jackpot everybody is chasing. https://t.co/IhX6TVoza5

•   The Bulls comeback win was BONKERS:

Wake Up and Watch The Bulls Massive Comeback Win Over the Trail Blazers https://t.co/rLICTscDh0