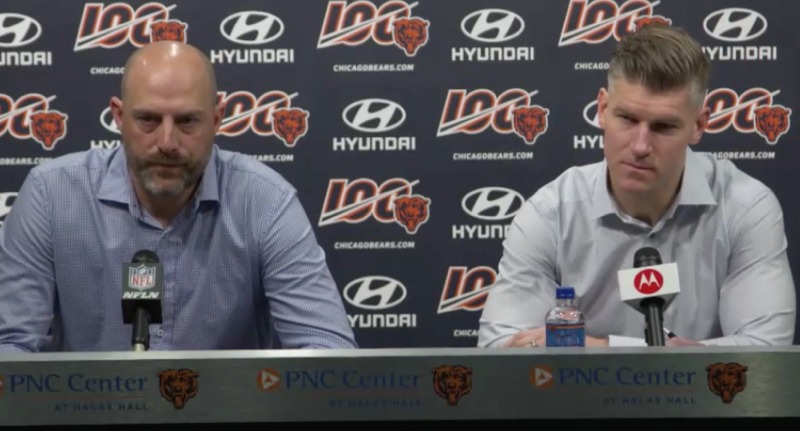 It’s too early to know who will take the first snap at quarterback for the 2021 Chicago Bears.

HOWEVA … it is never too early to speculate on who the team could target for the job. And since we know there is no shortage of possibilities, I’m ready to cover every angle until the Bears land on their guy.

Again, it’s early, but NFL Network insider Ian Rapoport seems to already have a sense of which direction Chicago is going this offseason:

From NFL Now: The #Bears brought back GM Ryan Pace and coach Matt Nagy… with clear thoughts about the future of the QB position. pic.twitter.com/jDehYZAtZa

A couple of worthwhile points made by Rapoport here:

(1)  “Clearly what Matt Nagy and Ryan Pace, who have been on this same page and have been together through this thing, now face a crucial 2021. They must’ve sold (Chairman George) McCaskey on a plan at quarterback.”

(2)  “It’ll be fascinating to see which way they go. Doesn’t seem like they’re going to be drafting high enough to get one of the top rookies. So, which veteran are the Bears going to end up with is obviously something we’re going to be discussing for the next three months or so.

Alright, so there are no big reveals from Rapoport. Nor are there hints regarding specifics. But Rapoport lays  the groundwork for what this offseason will entail for the Bears’ quarterback search.

For starters, Rapoport establishes the most plausible explanation for Chairman George McCaskey retaining Pace and Nagy. It doesn’t take much of an imagination to envision the two days of organizational discussions being rooted in Pace and Nagy making their pitch on how their plan to fix the quarterback position. And it doesn’t speak well at all for Mitchell Trubisky’s future when McCaskey says the team needs improved quarterback play. Whatever their pitch was … it was effective.

Secondly, Rapoport strongly hints the Bears will target a veteran quarterback, specifically. He doesn’t follow up with specific names. And he doesn’t suggest whether this veteran will be a free agent who they pounce on early in the signing period, a cap casualty who becomes available after that first signing wave, or a player who is made available on the trade market. Nevertheless, Chicago has options and the vibe is that they’ll opt for experience. That isn’t unsurprising, considering the must-win situation McCaskey has put Pace and Nagy in entering the 2021 season and the unfavorable draft position in which the team now finds themselves. But it’s still worth noting as we step into the great unknown of the future.