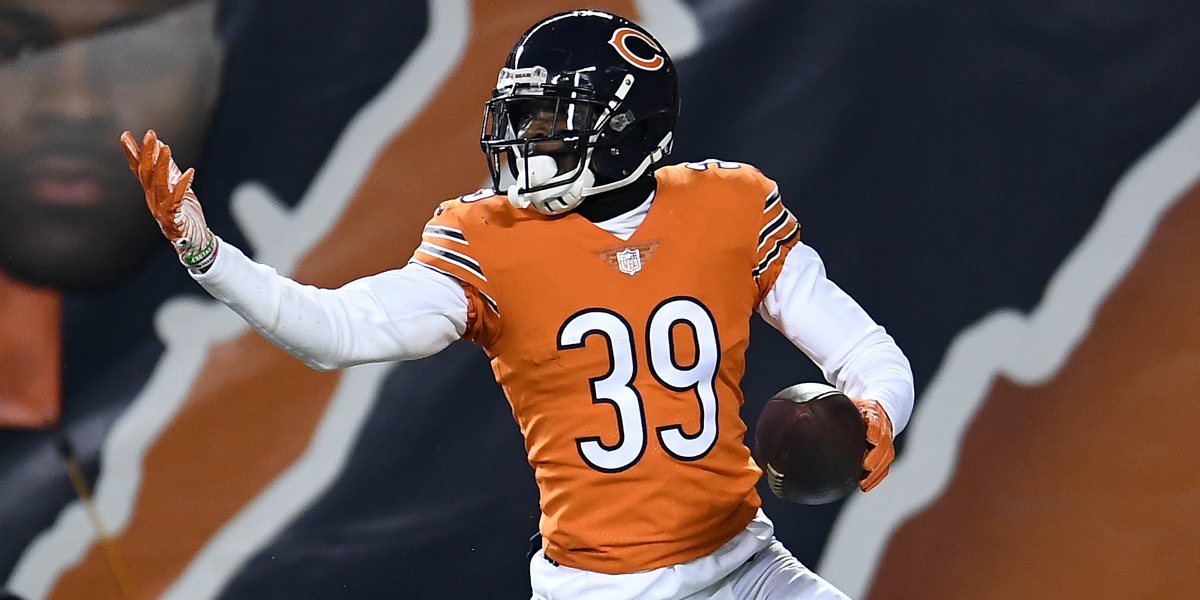 Inauguration Day was yesterday. And as expected, it was full of pomp and circumstance — even if it wasn’t what we’re traditionally used to seeing. But today, the real work for a better future begins. Best of luck to everyone involved. We’ve got a lot of work to do.

•   Regardless of whom the Bears hire to replace Chuck Pagano as defensive coordinator, I want them to unleash this version of Eddie Jackson for a full season:

•   Jackson wasn’t the same cat in 2020 that we saw in previous years. There were moments where things looked off by a half-step. He dropped passes he would’ve easily caught last year. Missed tackles popped up here and there. And the end result was a defense that graded out great per advanced metrics (and good enough by traditional ones), but it wasn’t the dynamic showing we’ve seen before.

•   I wonder how things would be seen had Jackson’s interception against the Giants not been called back. And if his pick-six agains the Rams wouldn’t have been waived off.  Or if any number of plays he made were’t wiped off the board due to penalties. My gut tells me 2020 was a one-off event. A blip. The type of anomaly we look back at and chuckle in a few years. But my brain tells me no matter what it was, it can’t afford to happen again.

•   To that end, I think Jackson knows that and is ready to have that bounce-back season:

•   I’ll never bet against talent. And when that talent is motivated, watch out. Sign me up for 16+ games of the Eddie Jackson Revenge Tour.

•   One coach we know who won’t be on hand to witness the proceedings is Jay Rodgers, who is taking his coaching talents to Los Angeles. So not only are the Bears looking for a new defensive coordinator, but they’re also seeking a defensive line coach. Other coaching changes could be on the horizon, too. As we learned after losing Vic Fangio, replacing high-end coordinators and assistant coaches has a real trickle-down effect. Since the end of 2018, the Bears will have see the departure of their defensive coordinator, secondary coach, outside linebackers coach, and defensive line coach. Or to put it a different way, this is what the brain drain looks like:

•   I’m a bit peeved that Rodgers won’t be the Bears’ defensive coordinator. Not to say I’m full-blown mad online about it. But I thought lifting Rodgers might’ve made for an opportunity to promote from within, maintain continuity, while also bringing new perspective and rounding up some old tricks. On the other hand, I understand why Rodgers would leave with his contract expiring. A job with the Chargers probably brings more job security and possibly new responsibilities. “Once a Bear, always a Bear” applies here. I wish good luck to Rodgers upon his departure. At least Aaron Rodgers is out of your hair for now.

•   Out with one popular candidate, in with a new one: Bears legend Mike Singletary has reportedly interviewed for the defensive coordinator vacancy. Singletary hasn’t coached in the NFL since 2016. His last two jobs came while working with former teammates. Singletary was with Jeff Fisher in 2016, and Leslie Frazier before that. I’m not wholly convinced Singletary will land the gig, but I wouldn’t be surprised if this was one step toward some role in the organization.

The #Chargers will interview #Colts defensive backs coach Jonathan Gannon for their defensive coordinator job on Brandon Staley’s staff, source said. Gannon was a popular name on several prospective head coach staff lists after thriving in Indy, and he also spoke with the #Bears.

Chicago is clearly working through all of their options to find right fit. After losing Fangio it was a tough assignment to replace him because he was the only guy in the NFL showing two high looks every snap. Pagano came in and tried to replicate. Tough task.

“It’s because of the bravery & sacrifice of individuals like you I get to play the game I love for a living.”

With the help of @Cigna & @the_USO, @TheJimmyGraham was able to share his appreciation with a Bears fan serving overseas during the holidays. pic.twitter.com/MTd6WkvyMW

14 years ago today the #Bears defeated the Saints in the NFC Championship.

It was quite the game.

From the eight straight runs to the Reggie Bush play to the Bernard Berrian catch to the safety and more, here is the oral history of that memorable day.
https://t.co/ZHb787ak3y

•   Big warm jackets are among the Deals of the Day at Amazon today. #ad

•   I see Dwayne Haskins is making his rounds:

Here's the @NFLFilms clip of Drew Brees and Tom Brady after Sunday's game.

And then Brees walks off for likely the final time at the Superdome. pic.twitter.com/fA1TqN75Ro

•   Are NFL franchises out of ideas?

•   After a brief (and necessary) hiatus, I’m back podcasting with Talkin’ Toros. We talk about growth, Zach LaVine’s arrival, and that big James Harden-Nets deal.