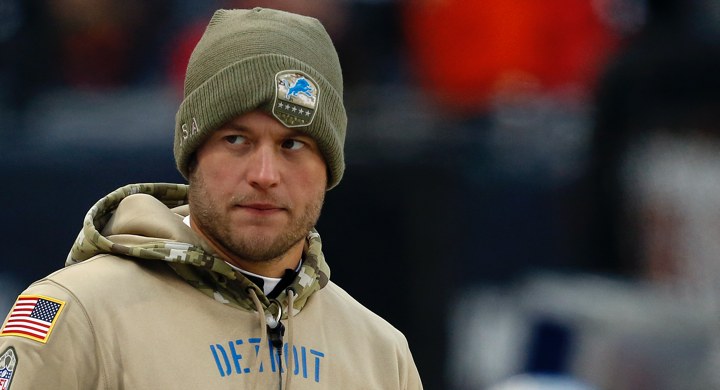 Matthew Stafford is an institution in Detroit. Or he was.

The first overall pick in the 2009 NFL Draft has racked up 45,109 passing yards and 282 touchdowns in 165 games in his career with the Lions. He’s even led the team to the postseason on three different occasions. But a changing of the guard has arrived, and, with a new head coach and offensive coordinator in tow, it’s time to pass the baton.

It appears as if Stafford will be playing elsewhere in 2021:

Sources: The #Lions and Matthew Stafford have mutually agreed to part ways this offseason and the team will begin exploring trade options in the coming weeks for their star QB.https://t.co/zT00sOGb8Q

NFL Network insider Tom Pelissero reports that meetings between Stafford, 32, and the Lions have resulted in the quarterback expressing a desire to leave the organization, thus putting in motion plans to discuss trade options for the many-time Comeback Player of the Year candidate (and 2011 winner!). Pelissero names the Broncos, Colts, Panthers, Saints, and Washington Football Team as teams that could inquire about trading for Stafford. Not only do all of those teams have needs, Indianapolis, New Orleans, and Washington represent fits if Stafford prefers to go to a contender.

The Bears aren’t listed among Pelissero’s possible options, but wouldn’t they make sense in terms of the need? Chicago needs a quarterback and is coming off a postseason appearance. Stafford knows the Bears well and the same can be said about the Bears and Stafford. Adding an established quarterback to a team with a 1,000-yard rusher and a top-10 defense by Football Outsiders’ DVOA metric would be quite the fit. Of course, there are hurdles to clear, such as the two years and $43 million left on Stafford’s contract, and most notably, maneuvering through the possibility of trading with a divisional foe. To me, the intra-division trade option is the biggest obstacle in bringing Stafford to Chicago. So if this is an option you’re rooting for, then I’d keep that caveat in mind.

Also note this: Pelissero notes a potential Stafford trade likely needs to be agreed upon before the fifth day of the 2021 league year. That’s because Stafford is due a roster bonus of $10 million on that date. Ideally, Detroit would like to get a deal done before that date passes.

So let’s keep an eye on this as it evolves. Because not only does it impact the quarterback market the Bears will have their hands in this winter and spring, but also could shape the future of a divisional rival. In other words, there’s plenty to keep tabs on with this situation.