Is Wentz Worth It? Pace's Job on the Line, Hicks and His 700lbs of Beef, and Other Bears Bullets Skip to content 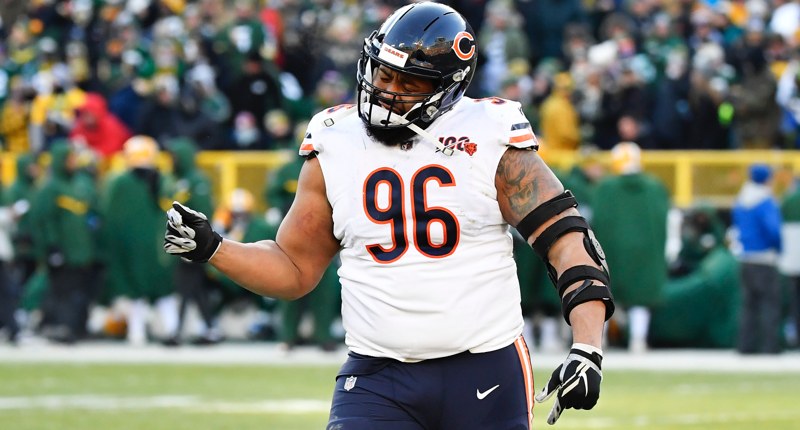 Every year is a reminder of how important February 10 is to me. For starters, it’s my grandmother’s 93rd birthday. I plan on delivering flowers to her senior citizen facility at some point this morning.

In addition, it was on this date in 2004 when Kanye West’s College Dropout was released. I could write a thousand words about that album, but all you need to know is that I consider it to be the most influential of my life. If you get a chance, give it a listen. You might enjoy it.

•   Leading off with something for your listening pleasure:

So…should #DaBears make a move for Carson Wentz or not?

🎙️@AdamHoge & @adamjahns discuss the pros & cons of such a trade with @kfishbain as the rumors continue to swirl.

•   Talking through the Carson Wentz thing reveals arguments for and against a pursuit of the Eagles quarterback. In addition to hitting peaks in 2018, there was a high level of competence from 2017-19. All things considered, I feel as if that stretch of play would be enough for me to kick the tires on an asking price. But that 2020 season was nothing short of a disaster. Between injuries and inefficient play, stomaching a Wentz acquisition after that would be tough.

•   No pressure: But Bears GM Ryan Pace is on Chris Roling’s list of NFL GMs whose jobs are on the line with this offseason. Pace is on the final year of his deal, so this offseason is one where he can’t miss. Not only does he have to nail the next quarterback, but needs along the offensive line, at wide receiver, and at a couple of spots on defense must also be addressed.

•   I’m not comfortable with the Bears sending a first-round pick to take on Wentz’s contract and roll the dice on upside while inheriting a fair amount of risk. Then again, it’s more valuable to the Bears to send this year’s pick than it would be to send a pick in 2022. Imagine if things bottom out, Pace and Matt Nagy are jettisoned, and that pick ends up being a top-5 selection. Good luck brining on a new GM and head coach facing an up-hill climb without a first-round pick.

•   I don’t like that two guys on this list are rumored as being shopped, while a third used has been the Bears’ starting QB since 2017:

•   Let’s be honest with each other: There was a sense of relief that came with the Bears’ season ending after one playoff game. And yet, I’ll miss watching Akiem Hicks put in work on Sundays at noon:

•   A look at some impactful Bears during Black History Month:

•   I’ve been known to say this about Patrick Mahomes, so I’m glad someone else said it (thus, confirming my feelings):

•   The NFL lost one of its best writers and reporters on Tuesday when Terez Paylor died unexpectedly at age 37. Bears Head Coach Matt Nagy recently spoke to Paylor, so it’s fitting that he is the one to issue this statement:

•   The outpouring of Terez Paylor tributes serves as a reminder to tell folks you love them while you have a chance. You never know when it’ll be your last:

Spent Tuesday thinking about Terez Paylor. Shared endless calls with those who knew him. Cried a lot, laughed a little — and came away knowing I’m just one of a great many who will miss Terez forever. If you never met him, give me a moment to tell you why. https://t.co/wsnv1Iyrng

Terez recorded a daily Chiefs video update during the season and I was the videographer for all of those. Every day, I’d store the funny bits knowing I wanted to make a clip for the end of the season to show off the hilarious Terez. https://t.co/ZktbMgjqPy

More on the life of the great Terez Paylor from @mellinger.https://t.co/bDQ8sCc4Rx

For my friend. I love you Terez pic.twitter.com/V4Lkm6AKDN

•   NFL Network insider Ian Rapoport still believes Washington’s football team is in the market for a QB. In the meantime, they re-upped with the quarterback who started the team’s playoff loss to the Bucs:

The Washington Football Team has agreed to terms on a 2-year extension for QB Taylor Heinicke, sources say, worth $8.75M. There are also incentives depending on how many games he starts. Real security for their resilient QB who started and impressed in the playoff game.

•   Some shuffling of the deck chairs on the Vikings’ ship:

The #Vikings have officially named Klint Kubiak as Offensive Coordinator.

The #Vikings have added Keenan McCardell (@KeenanMcCardell) as WRs coach.

McCardell served in the same role for the Jacksonville Jaguars from 2017-2020.

The #Vikings have added Sam Siefkes (@CoachSiefkes) as a defensive quality control coach.

•   The Lions patching things up with Calvin Johnson has been long overdue:

•   Detroit hiring Antwaan Randle El to a coaching position is enough of a reason to share this: