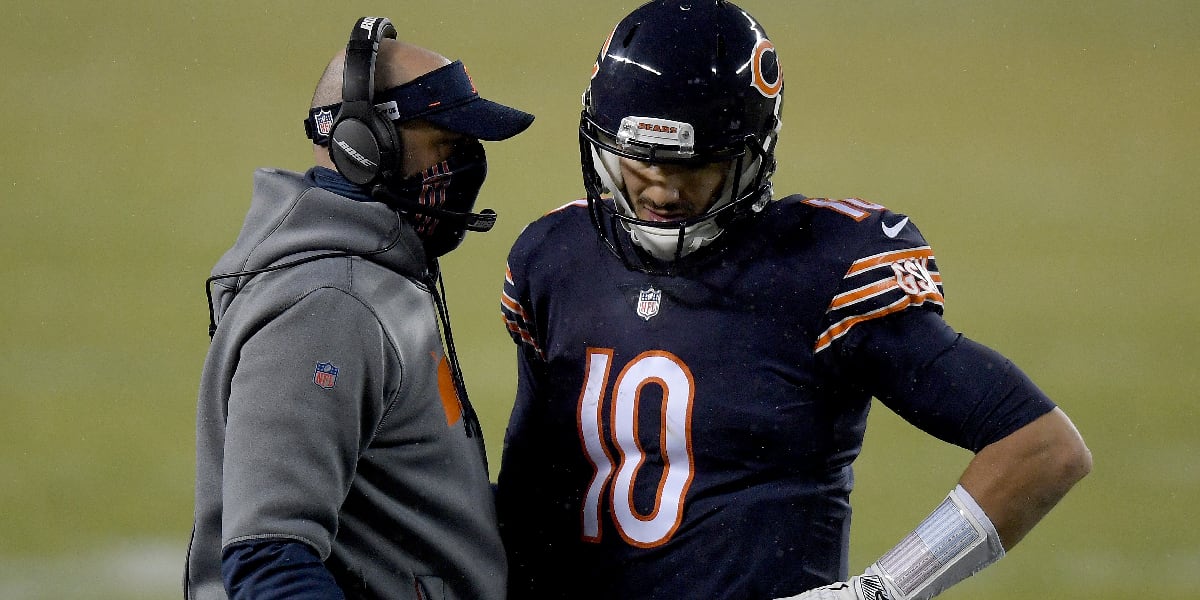 I haven’t loved how this season’s version of The Bachelor has used one-on-one dates to eliminate the ladies. But each time it’s happened this season, I’ve left feeling like this is probably what’s best for the ladies because they deserve better.

A.I. knows exactly what it’s doing and I hate it. pic.twitter.com/U5lOQt4HNU

•   I can totally relate, Akiem. This is like when I put my iTunes library on shuffle in mid-winter and the first song is a Taylor Swift song that makes me want to throw another weighted blanket on top of me. Weird how that works. Celebrities and athletes: they’re just like us!

•   Smooth transition from one set of tales of unrequited love to another will be effortless. Yesterday, we discussed a report that a hang-up in the Bears’ pursuit of Carson Wentz could be the quarterback’s greater desire to go to Indianapolis than Chicago. To be clear, it’s not as if the report says Wentz won’t approve a trade to Chicago. And it doesn’t say Wentz doesn’t want to go to Chicago. Even if it did, Wentz does not have a no-trade clause, so his say in the matter might not mean much to an Eagles team simply looking for the best deal. However, that Albert Breer suggests that the Eagles might need to do some convincing in order to make a deal with the Bears happen speaks volumes.

•   And frankly, the Bears should want clarity from Wentz’s camp about what he wants. Because going into a must-win season with a quarterback whose head and heart would rather be elsewhere doesn’t seem ideal.

•   This is a disturbing trend, but one which helps explain why the Bears are likely moving on from Mitchell Trubisky this offseason:

From the new 2021 @PFF QB Annual,
Mitch Trubisky's percentage of throws on his first read:

•   It shouldn’t be lost on us that Matt Nagy (and Bill Lazor) increasingly schemed to that limitation, especially down the stretch. Even still … that’s still an alarmingly high percentage of throws. A quarterback whose limitations are that deep will do a number on how creative your offense can be.

•   I hate that my gut tells me that, no matter what the Bears do, it will be perceived as being the wrong decision:

If you're the Bears and you're thinking about giving up draft assets and/or players and to take on more than $40M over the next two years for a QB who doesn't want to play for you, do you really make the trade? So, yes, Wentz has power here.

•   Then again, I see both sides of the coin. I can come to grips as to why the Bears would pursue Wentz. Assuming they do their due diligence and vetting of the player and his situation, then come away still seeing a fit, then it’s a roll of the dice on a player who has shown a high level of competence and an even higher ceiling – even if his most recent tape is ugly as heck. But if there needs to be real effort to nudge Wentz to Chicago, will the juice be worth the squeeze?

•   This portion of the pursuit reminds me of when the Cubs traded for Fred McGriff in 2001. If you’ll recall, McGriff nixed an early July trade between the Cubs and Rays by invoking his no-trade clause. It’s not that McGriff didn’t want to play for the Cubs. Instead, he prioritized wanting to be elsewhere. Nearly three weeks later, McGriff came around to accepting a deal to Chicago. McGriff slashed .282/.383/.559 with a .942 OPS in 49 games, ultimately justifying why the Cubs pushed for a deal. Maybe that’s what happens with Wentz? Perhaps he sees an opportunity in Chicago after giving it some time to think it over. Or maybe he doesn’t. But it’s the hesitation being a hang-up that is going to cross folks up.

•   Chris Roling (Bleacher Report) lists some interesting players who are set to become free agents, but whose signings could be risky endeavors. Among the offensive players of note who could conceivably be Bears fits are Hunter Henry (TE), JuJu Smith-Schuster (WR), and Corey Davis (WR).

•   On the other side of the ball, I’m excited to see how creative Sean Desai can be. The first-year defensive coordinator hit all the right notes in his introductory press conference. He talked about valuing speed, putting players in the best position to be successful, and having good tools in place for the bounce back. We’ll dive deeper into some things Desai said, but I wanted to highlight one specific quote that caught my attention:

•   We, as a fandom, tend to romanticize defense to another level. And with the 2018 group, I can understand why. It was the Bears’ first postseason appearance since 2010, first winning season since 2012, and an overall fun team to watch. Watching those Bears was the most fun I had watching football since the season that ended with a loss in Super Bowl XLI. But the time has come to move forward. Let the past go. And to that end, these Bears need to embrace being the best they can be in 2021 and not try to recapture the magic of 2018. Evolution will take this team to another level. But wishing on what once was, but isn’t now, is wasteful.

Bobby Douglass had a wild ride with the Bears, pitched in the minors for the Sox and married a Playboy Playmate. @danpompei with the story of a Chicago legend.https://t.co/SVWd2qpYGs

•   A developmental QB prospect worth keeping tabs on during the pre-draft season:

•   For those of you who happen to read us and listen to the Hoge & Jahns podcast:

It happened. Excited to partner with @obvious_shirts on our first collection of Hoge & Jahns shirts. For the rest of February, a portion of the proceeds will benefit @22qFamily. Get them here! https://t.co/NdEAjuY3e1 pic.twitter.com/QAkEKi2Zre

•   Bic writing stuff, massagers, and STEM toys are among your Deals of the Day at Amazon today. #ad

•   Our friends at BN Bulls and BN Blackhawks celebrated overtime wins last night. Must be nice.

THIS IS WHAT AN ALL-STAR LOOKS LIKE. #ZachLaVine #NBAALLSTAR
(🎥 @chicagobulls)
pic.twitter.com/FSigkkusiQ