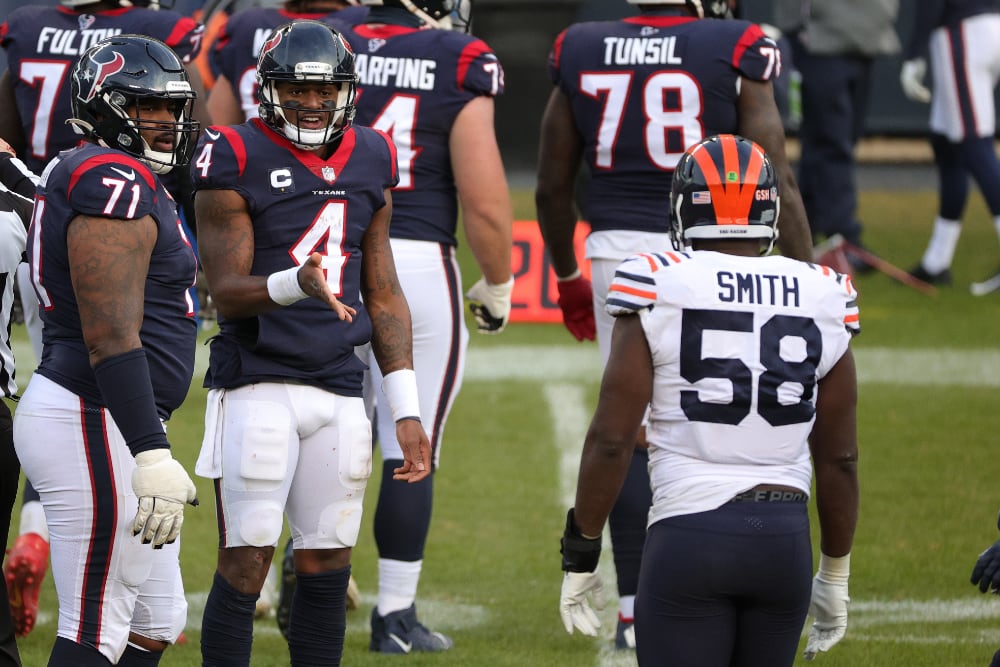 In a world where all things are equal, it’s no problem that Matthew Stafford, Carson Wentz, and Jared Goff are already off the board as possibilities to become the next Chicago Bears quarterback.

But that’s only because Deshaun Watson — the biggest fish on the market — still hasn’t moved.

Unfortunately, it’s going to be extremely difficult to reel him in:

Football Morning In America is up! It covers:

• My proposals for what it may take to get Deshaun Watson
• Which calls the Texans are returning (spoiler: none)
• The Wentz trade breakdown, from both sides
• Reader mail, factoidness, 10 Things, morehttps://t.co/GkFYaDi8T7 pic.twitter.com/xVbsCuFUoz

Long-time football insider Peter King rattles off all sorts of potential trade scenarios involving Watson. There’s even a mention of Chicago being a possible trade partner for Houston: “Chicago would certainly be interested,” King writes. “but drafting 20th this year is a big negative, with no QB other than Nick Foles to deal; the lack of significant young talent to package is a negative too.” Ouch. That stings. But it’s not wholly untrue, so take that however you’d like.

As for teams who can make proposals that King feels is worthy, there aren’t many. And the ones that he proposes on the teams’ behalf are downright bonkers. Two are straight from the nuh-uh, no way that happens category:

⇒   There’s a layer of ridiculousness I wouldn’t even approach in the wild three-way proposal between the 49ers, Vikings, and Texans. King offers Minnesota sends Kirk Cousins to San Francisco, the Niners sending Jimmy Garoppolo to the Texans, and Houston sending Watson to Minnesota. There would be other picks and players going any number of different ways. But it’s hard to envision a trade where John Lynch doesn’t get the most value on a trade chart.

What would a Bears package that rivaled the ones above even look like? First-round picks in 2021, 2022, and 2023, LB Roquan Smith, WR Darnell Mooney, and more? Boy, howdy. That’s a spicy meatball. One that I’m not quite ready to de-construct right now.