In Addition to Many Other Needs, the Bears Entire Kicking Mechanism is Set to Hit Free Agency Skip to content 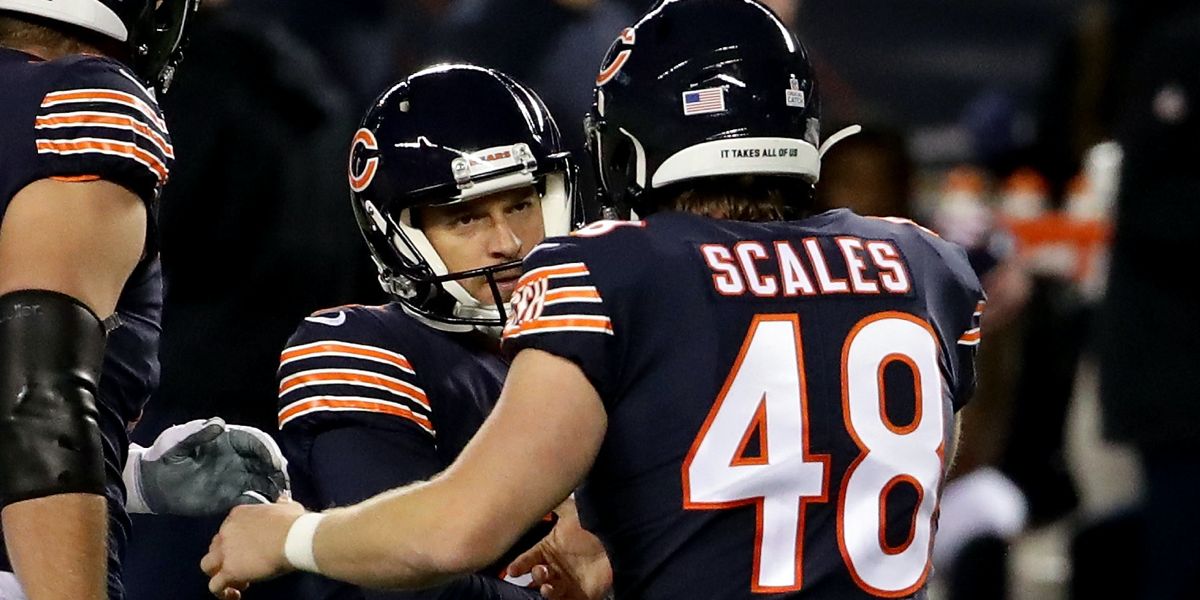 Finding a new quarterback is high up there on the priority list. No doubt about it. As is retaining wide receiver Allen Robinson. But there’s one aspect of the Chicago Bears offense that is in flux and could see major changes this offseason.

Don’t laugh. I’m being serious. This is a real question we must entertain heading into the new league year. Obviously, unearthing a quarterback to be named later and re-signing Robinson are at the top of the Bears’ to-do list. But it’s no small deal that the most successful aspect of the Bears’ offense was in a trio of specialists who are about to hit the open market.

Save for an early-season hiccup, Cairo Santos was nails in the kicking game this year.

Santos finished seventh in makes (30) and accuracy (93.8%), was perfect on kicks inside of 40 yards, and missed just two attempts from beyond that range. In fact, he finished the year making 31 consecutive field goals — 32, if you count the Bears’ playoff loss. After living through the pain that has been a carousel of underwhelming place-kickers over the past several years, the Bears appear to have found something in Santos. And for once, I’d like to not have an offseason of kicker-related stress. But we’re two offseasons removed from Jason Myers getting a market-setting deal from the Seahawks (4/$15.45M). More recently, the Dolphins signed Jason Sanders (5/$22M) just weeks ago. Kickers coming off strong years get paid. And Santos might be next.

To further complicate things, Santos is only one part of the kicking tripod whose future is uncertain.

Punter Pat O’Donnell‘s two-year deal expires when this league year ends. So in other words, the Bears could conceivably be looking for a kicker and punter. Doesn’t that sound like fun? I suppose there is a case to be made that Chicago should look into other options. O’Donnell’s 45.7 yard average ranked 16th, while his 39.5 yard net average checked in at 22nd. Those aren’t awe-inspiring numbers. But O’Donnell’s 28 punts inside the 20 were tied for third most in the league last year. And when your team’s success is predicated on defensive excellence, winning the field position battle by pinning opponents deep is important.

And let’s not forget long-snapper Patrick Scales. The Bears snagged Scales off the Ravens’ waiver wire in 2015 and he’s survived the John Fox and Matt Nagy eras so far. There isn’t much statistical data on long-snappers, so the best thing we can say about Scales is that he’s never been in our cross-hairs for the wrong reason (long-snappers catch our eyes only when they botch a snap). To this point, Scales’ snaps have been clean. So maybe he is someone the Bears should make sure to keep from leaving elsewhere? I’d hate to add long-snapper to what’s an already lengthy shopping list.

To be clear, I wouldn’t prioritize re-signing three specialists ahead of some of the Bears’ more pressing needs. But we shouldn’t ignore an obvious item to cross off the checklist. Head Coach Matt Nagy knows first-hand how important special teams is to a squad’s success. When things went south with the kicking game, Chicago roped in kickers like they were cattle. And when the return game wasn’t up to snuff, the team signed Cordarrelle Patterson to plug that hole. So it’s not as if I fear the Bears won’t address the obvious. Instead, there’s a part of me that worries about letting a good thing go away and not replacing it with something as adequate (if not better). As if we needed something else to worry about this offseason.