One thing I’ve been advocating for over the years is for football coaching staffs to grow – well, at least the Bears coaching staff. Between coach and player specialization, a desire to reach more individuals, and the growing responsibilities of the coaches at the top of the ladder, it only makes sense to add more lieutenants to carry out orders in a trickle-down manner.

So in that vein, I find the Chicago Bears’ newest hire interesting:

“Special Projects” could mean anything. Maybe Herman is an analytics junkie who can provide perspective on when to go for it on fourth down, analyze ideal times to go for two, or any other analytical based football happening. Perhaps Herman is coming on as someone who can aid in the Draft process. Herman went 32-18 as a head coach at Texas and was a hot commodity before going to Austin. For what it’s worth, Herman has a history coaching quarterbacks and as an offensive coordinator with stops at Texas State, Rice, Iowa State, and Ohio State. All things considered, the Bears can use all the analyst help they can get on offense — and specifically, at quarterback.

I’m looking forward to diving into Herman’s background and perhaps unearthing more about this interesting hire. 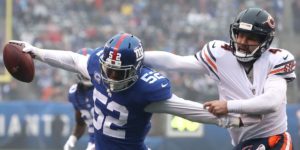