2021 Offseason Outlook: Inside Linebackers - Is It Too Soon To Talk About a Roquan Smith Extension? Skip to content 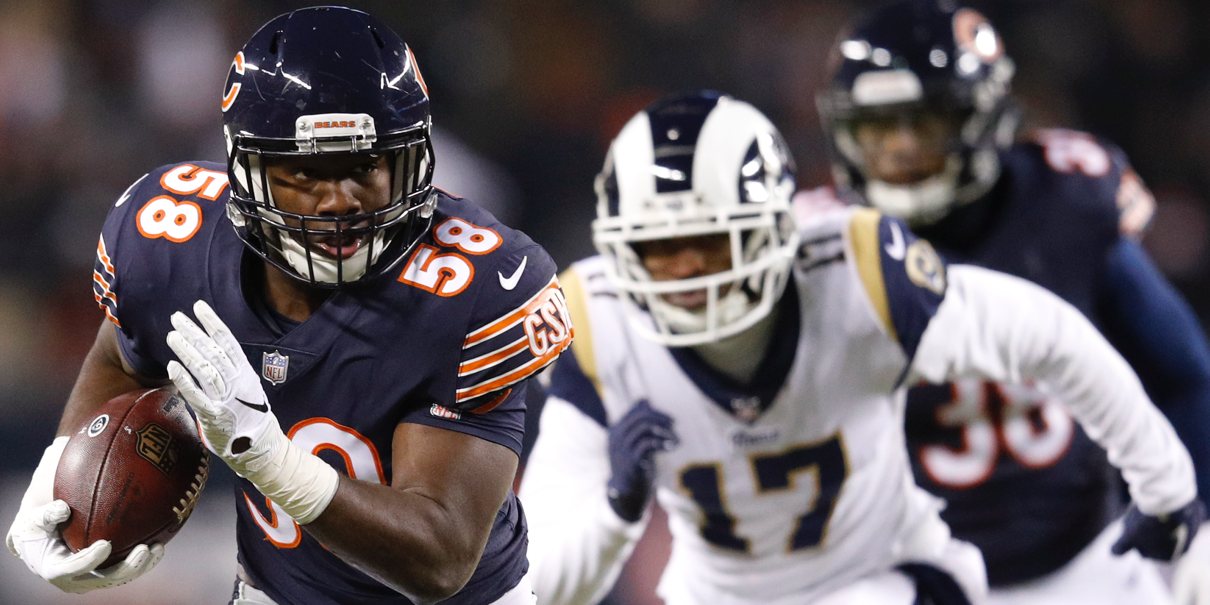 Looking ahead, the 2021 offseason could very well dictate the long-term future of the franchise. GM Ryan Pace enters the final year of his contract. He needs to prove he can find a quarterback and unearth offensive skill players. And Head Coach Matt Nagy has two seasons remaining on his deal. But he might not make it to next year if he can’t show that his offense can work. But before we cross those bridges, let’s take a position-by-position look at the team heading into a pivotal offseason for the Bears franchise.

Roquan Smith was a star in 2020. He earned second-team All-Pro honors after a season in which he had more solo tackles than Bobby Wagner … collected more tackles, sacks, QB Hits, and tackles-for-loss than Darius Leonard … and more total tackles, solo tackles, tackles-for-loss, and sacks than Fred Warner. That’s impressive on its own. But it’s more impressive knowing those guys got first-team All-Pro honors, leaving Smith as a snub.

Danny Trevathan started slowly in 2020, but found his fitting and racked up 113 total tackles. I was worried about Trevathan early in the season, but it’s possible his struggles could be chalked up to not having a traditional offseason. If that’s the case, then the Bears better hope this offseason is more normal than last year’s.

Joel Iyiegbuniwe has grown into a core special teams member. So even though he hasn’t filled that Nick Kwiatkoski role of being a special teamer who can player a larger role on defense, Iyiegbuniwe’s third-phase contributions shouldn’t be overlooked.

Josh Woods re-signed as an exclusive-rights free agent. Like Iyiegbuniwe, Woods has carved a role among the core special teams contributors.

Want to win some money in a bar bet? Ask your friends who started at inside linebacker in the Bears’ playoff loss to the Saints in January 2021. If they say it was Manti Te’o, they probably read this post.

Don’t even think about releasing Danny Trevathan. Cutting the long-time inside linebacker would cause the Bears to *LOSE* $8.425 million in cap space. Gulp. That’s a lot, especially for a team that needs every dollar it can get its hands on. I suppose the Bears could designate Trevathan as a post-June 1 cut. That move would create $100,000 in cap space, but come with a $4.525 million dead-cap hit. In other words, it doesn’t seem worth it.

If the Bears wait until 2022 to cut Trevathan in a move to create cap space, they could create $3.5 million by doing so under the post-June 1 designation.

Expect the Bears to pick up the fifth-year option on Roquan Smith’s rookie deal. Once that happens, we can get the ball rolling on discussing an extension. And from a Bears perspective, getting a deal done sooner, rather than later seems ideal. Otherwise, Smith racking up consecutive All-Pro caliber seasons could put him in the market for a mega-deal. Think something along the lines of Bobby Wagner ($18M AAV) or C.J. Mosley ($17M AAV). Then again, if Smith puts together back-to-back baller seasons, I don’t think too many fans will care what type of deal is coming his way, so long as it’s with the Bears.

As for upgrading the position group, Chicago needs to either dive into the later portion of the draft and/or undrafted free agency to unearth some gems. Danny Trevathan isn’t getting any younger. Joel Iyiegbuniwe could hit free agency after the 2021 season. Fellow special teams member/linebacker Josh Woods could join him. In other words, the Bears need to back up their depth behind the starters. Finding these types of players is something this front office has done well in the past. But they’ll need to do it again soon enough.