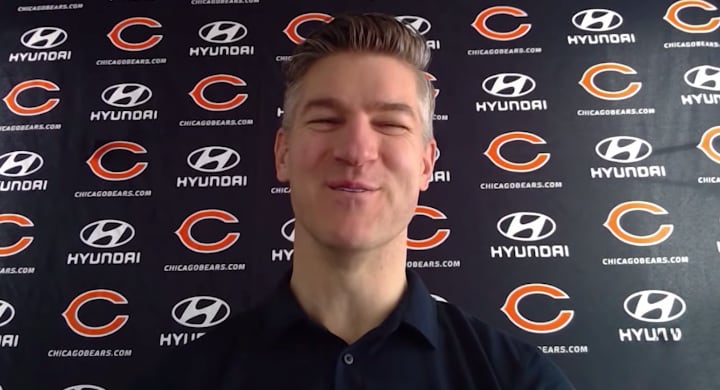 Rival general managers throughout the NFL reportedly view the Bears as a threat to trade up in the upcoming NFL Draft.

And while there is a non-zero chance this is a smokescreen in an attempt to drum up trade interest from others, Chicago has (1) desperation to trade up because of its quarterback needs and (2) an owner who is on record saying he reaches out to other NFL franchise owners for advice on how to run his team. In short, this feels like one of those situations where folks are hearing things and sharing those things with others before it all trickles down to us.

So, then, here’s your reminder to take everything with a grain of salt (always, but especially this week). But also, be aware of all possible routes. After all, by now, Ryan Pace has us conditioned to expect the unexpected.

With all that being said, it’s important to note that Chicago’s trade-up options appear to be growing.

We already know of Chicago’s reported interest in trading up with the Falcons, who own the fourth pick. But if that doesn’t come to fruition, others could come calling.

Dolphins— Miami owns the sixth pick. And while it has already made *TWO* trades around the first round, more could be on the horizon. NFL Network insider Ian Rapoport hears the Dolphins have been taking calls from teams wanting to trade up to the sixth spot. Moreover, Rapoport adds it is a possibility the team is considering. There are plenty of balls in the air for Miami. For instance, it could trade back and up again if it so chooses. We’ve seen stranger things happen.

Consider this: The Dolphins could trade out of the sixth pick with the Bears. Then, it pivot with the 18th and 20th picks and move back up again. For this scenario to play out, the Dolphins would need (1) the right QB to be available and (2) another team wanting to trade out after Miami moves down. But with ample pick capital at their disposal, the Dolphins could make so much happen with their collection of picks.

Lions — LOL. Detroit isn’t trading a draft pick that could yield a potential franchise quarterback to a division rival. But please keep reading.

Panthers — Carolina owns the eighth pick, and ESPN’s David Newton reports the team is “very open” to moving back from that spot. With new ownership int its second year and a first-year GM, I can see the analytically inclined Panthers wanting to take advantage of a QB-starved team and load up on picks in the process. Should a quarterback fall to where they are picking at eight, the Panthers should have no shortage of suitors. General Manager Scott Fitterer told reporters “at least five teams” have discussed the possibility of trading up.

“We’ll have to look at the players that are available when we pick and how many of those players can help us that we’ve identified, how far we can trade back and still get one of those players without trading out of the [top] level,” Fitterer said. “We don’t want to trade out of a certain level where the talent dips.”

“We’ll see what the options are. We’re more than willing to listen to other teams, and if they want to offer picks and we can go back and get one of the players we want and get multiple picks to help build this team, that’s what we’ll do.”

Translation: If Carolina’s pick happens to be in a place where one of the top-5 quarterbacks in this class falls, the Panthers will be open for business. In other words, teams better be ready to take their best swing when the time comes.

Broncos — Benjamin Allbright, who is as keyed into the Broncos as any league insider, offers this:

I think there's a certain scenario where they try to get to 9. https://t.co/Zfe3OoK18D

In essence, Allbright is connecting the Bears and Broncos as possible trade partners. This is the second time in as many weeks that idea has been floated out there for our consumption. That’s … interesting, to say the least. After all, Denver has its own quarterback needs. But if the Broncos are more inclined to create competition to push incumbent Drew Lock rather than draft his possible replacement, I can see an opportunity for the Bears to move up.

Between Head Coach Vic Fangio and new GM George Paton (who was previously with the Vikings), the powers that be in Denver should have a good feel for Chicago’s situation.

Cowboys — I’ve long viewed the Cowboys as a possible trade partner. Although, I was hoping they’d finish higher in the draft standings than where they finished at No. 10. Nevertheless, there is potential for fireworks between Chicago and Dallas:

If the right player doesn’t fall to them is doing a ton of the heavy lifting here. But that the Bears are a realistic trade-up possibility for the Cowboys if a QB is available at 10 is all I needed to hear. That’s likely the last scion of hope for Chicago if it comes to it. Part of me wants to think that it doesn’t come down to that. But I suppose if Justin Fields or Trey Lance happens to be available at No. 10, and the Bears wouldn’t have to trade as much to move up as they would to one of the other spots, then so be it. The juice could be even more worth the squeeze at that point.