How to Turn a Rookie into a Foodie, Juice's Perspective, Coaches Playing Good Cap-Bad Cop? And Other Bears Bullets Skip to content 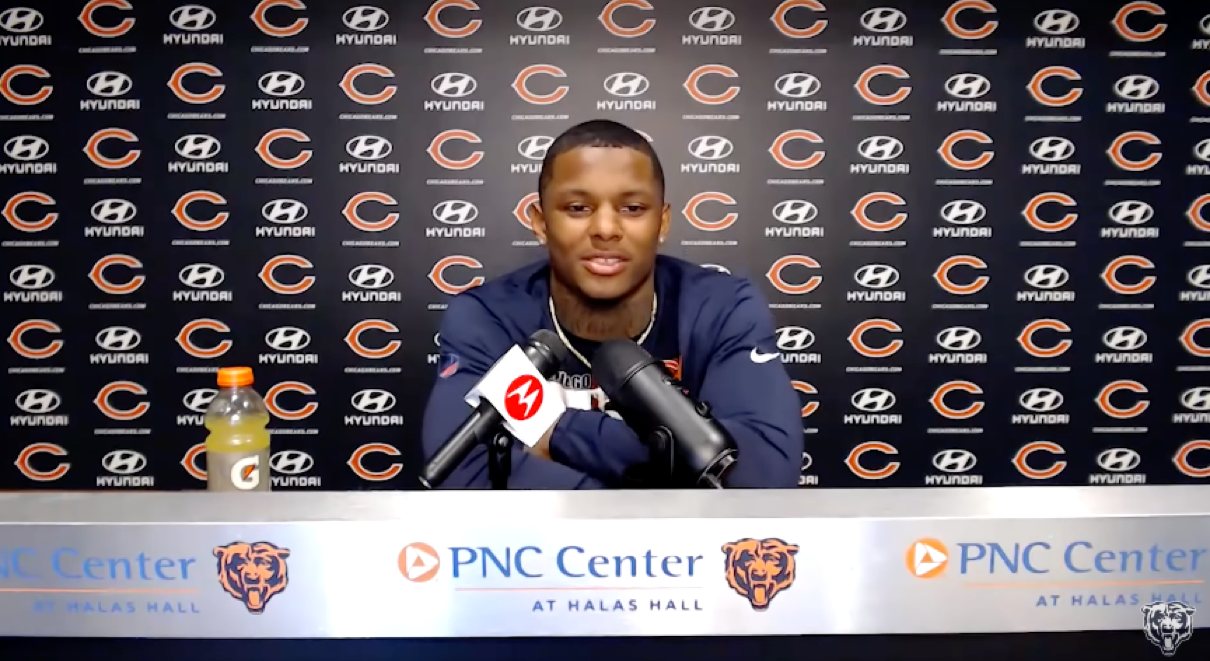 My childhood best friend is going to be a dad. And I suppose I must do my part to ensure the little munchkin doesn’t follow mom down the path of being a Vikings fan. Wish me luck!

•   Today is the last day of Bears minicamp. And if all goes well, a familiar face will return to the fold:

Matt Nagy says if he has a negative COVID test on Sunday morning, he will be at Sunday's rookie minicamp practice. #Bears

•   There is no such thing as “good timing” when it comes to needing to be in COVID protocols. But based on his earlier comments, I’d bet Bears Head Coach Matt Nagy is itching to get his hands on Justin Fields. Nagy is the most quarterback-obsessed coach I’ve watched since I’ve been following the Bears as a fan in my formative year. Not only is Fields the biggest blue-chip prospect this franchise has had at the position in my lifetime, he is also the most-talented quarterback Nagy has had since arriving in Chicago. No doubt he wants to get in the lab with Fields. Once he clears protocols, that time will come soon.

•   If I didn’t know any better, there’s some good cop-bad cop stuff going on here:

Matt Nagy: “Mike and I talked about that. That wasn’t what Mike was trying to say about Anthony Miller. His message was about the depth we have at that position.“

•   Bears WRs Coach Mike Furrey was pretty open about the competition at the receiver spot, which essentially put Anthony Miller on notice. So, even though it seems as if Nagy’s angle is softer than Furrey’s perceived stance, this seems to me like a classic good cop-bad cop dynamic. Furrey dishes some tough love, Nagy comes through with the positive reinforcement. By allowing trade rumors to persist publicly throughout the offseason, the Bears’ organizational message was clear. This only furthers what looks like a classic breakdown-to-rebuild plan. Hope it works. Miller is too talented and should be awfully motivated to get right after three inconsistent seasons.

•   You gotta love this attitude from a sixth-round pick:

Get to know @dazznewsome05. ⤵️

•   Speaking of Dazz Newsome, he had what might be the early favorite for press conference of the year:

•   Sharing and suggesting all my favorite foods with a professional athlete is a dream conversation. In the video above, Harold’s Chicken, Pequod’s, Portillo’s, and Lou Malnati’s were name-dropped. I probably would’ve added Margie’s Candies (for the best sundaes) and Taqueria El Asadero (for tacos) on top of those selections. And while Newsome shared his disappointment in Waffle House not being in the area, at least there is one in Nashville — where the Bears will play their third (and final) preseason game this summer. If I recall,  the nearest one to those of us who live in Chicago is around Indianapolis. Perhaps a Waffle House road trip is in order?

•   I’ve got the entire spring and summer to gear my brain toward Dazz puns and Daz Dillinger references:

10. Dazz Newsome takin’ it to the house at #Bears rookie mini-camp. #AllThatDazz

•   Can’t get enough of the rookies in Bears garb:

•   After the last 14 months, we should know not to take anything for granted. Which is why I totally vibe with the idea of these guys being on the football field as a blessing:

From @HokiesFB to Chicago Bear, @JuiceHerbert is counting his blessings.

•   Welcome to the league, rookie:

Rookie minicamp is about learning.

A) media members are at practice: “Man I thought y’all were boosters. … that’s crazy.”

And B) Most of us just cover the Steelers: “Bro. What? Where are you from?” pic.twitter.com/67hKxhv52A

Former Broncos OT Ja’Wuan James is strongly considering filing a grievance through the NFLPA over potential lost wages of up to $10M, per source. James tore his Achilles away from the facility and Denver released him Friday.

•   And while I understand the letter of the law when it comes to injuries that occur outside of the facility, I struggle to fault a player who injures himself while working to be better at football. You’d think there would be a middle-ground to be had here.