Matt Nagy as a Source of Optimism, a Ringing Endorsement for Mack, Coach Prime, and Other Bears Bullets Skip to content 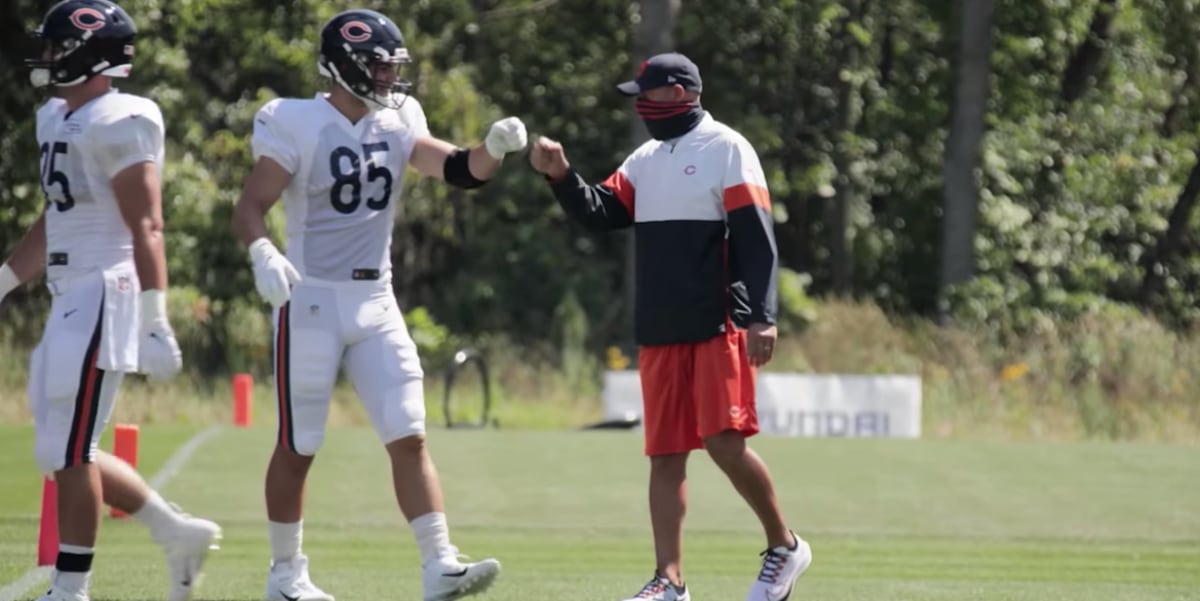 The NHL expansion draft is happening, and it almost makes me wish the NFL was having one, too. Discussing which players get protection would be a doozy. Maybe the NFL can open its doors to two more teams. Perhaps it can put one in Arlington Heights?

•   I woke up this morning thinking about how we’re one month from seeing Justin Fields vs. Mitchell Trubisky at Soldier Field. It will be Fields’ second preseason game in Chicago, and Trubisky’s first game back since leaving in free agency. The exhibition will be kin to a passing of two ships in the night. And I’m highly interested. To be clear, I won’t put a ton of stock into what happens here. But if Fields is going to get plenty of action, and the Bills figure to limit Josh Allen’s exposure, then the only conclusion we can come to is that we’ll see a bunch of Fields and Trubisky. It’ll be fun, right?

•   Khalil Mack is good at football, and his peers know it:

•   Remembering Khalil Mack is on your favorite football will fill you with hope. And if that’s not enough, Kristopher Knox (Bleacher Report) presents more reasons for optimism. Knox goes through all of the NFL’s 32 teams to unearth each team’s biggest reason to be optimistic going into camp. Surprisingly, Knox brings up Matt Nagy’s track record as head coach. No, really.

•   Opinions on Nagy seem to be split among Bears fans. And while there is some fair hand-wringing over some of his play calls as an offensive coordinator, the head coach aspect is something he seems to have a grasp of after three years. Nagy is three seasons into a head coaching career and has two postseason appearances under his belt. He has yet to have a team finish below .500. And, let’s be real with each other, two playoff berths and no seasons with a losing record despite what has been mediocre-at-best quarterbacking says a lot about what the head coach is doing to keep the ship afloat. Now, imagine what this team could be with some above average QB play. If Nagy can get it, we might be discussing an extension at this time next year.

•   It’s easy to hitch your bandwagon after hearing a Mic’d Up Coach Nagy:

25th pick Travis Etienne getting guarantees with no offsets from Jags may complicate things for Jets & 49ers with #2 & #3 picks Zach Wilson & Trey Lance. Offsets may have already been a sticking point. Bears #11 pick Justin Fields' 2022-2024 roster bonuses don't have offsets.

JSU coach Deion Sanders walks out of SWAC media day after being addressed as Deion.
"If you call Nick (Saban), Nick, you'll get cussed out on the spot, so don't do that to me"
I covered Saban for 6 years. He was called Nick many times. He never said a wordhttps://t.co/nwrRIoRzTx

•   College football at HBCUs is fun to watch. No, it doesn’t often have the type of marquee players fans gravitate to on Saturdays. But the style of play and the bands at halftime is the type of stuff college football fans tend to find themselves watching. And let’s not forget the all-time greatest Bears player, Walter Payton, is an HBCU product. With that being said, my hope is for Deion Sanders to bring some more attention as Jackson State’s head coach. However, I’d like it to be for better reasons.

•   This might go down as the most satisfying win of what is looking like to a lost year on Chicago’s North Side:

•   This is the best news the Bulls have had since the day they made a trade to acquire Nikola Vučević:

Zach LaVine Has Cleared Protocols and Will Head to Tokyo Later This Weekhttps://t.co/hkbt28Xmwv

•   Get your calendars ready:

The 2021-22 NHL Schedule Will Reportedly Be Released on Thursday. It will include a Winter Olympic break. https://t.co/2uhd5kSRFA