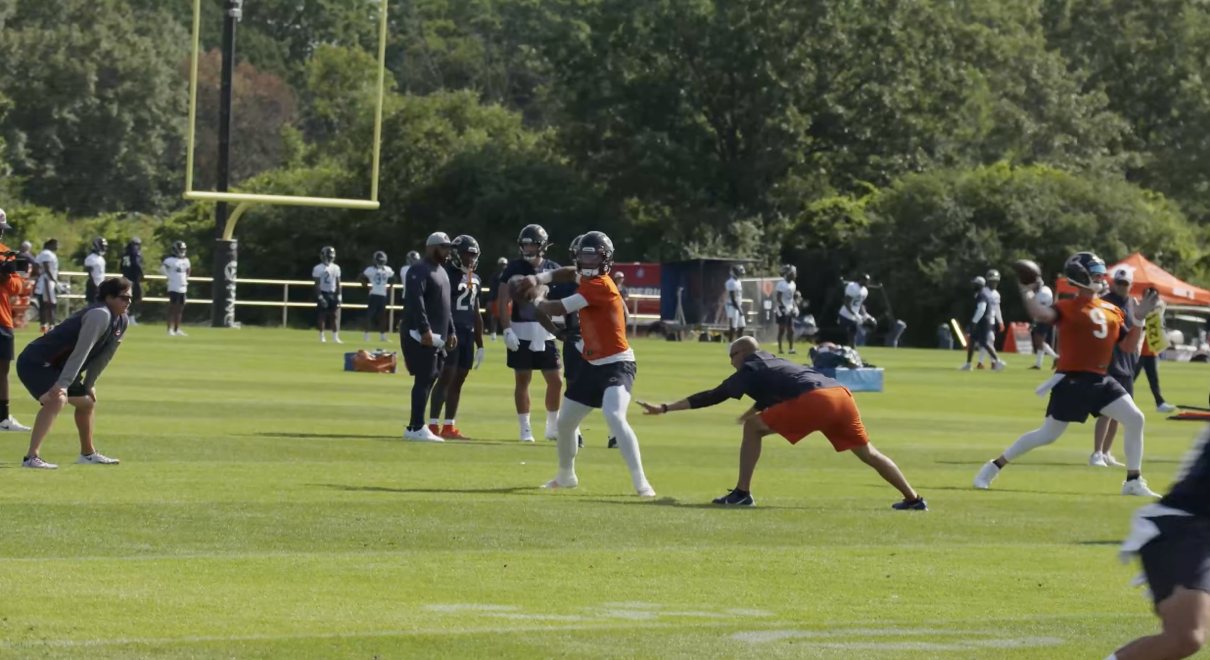 I think I can speak for all Cubs fans who cross over and are Bears fans when I share this sentiment:

Cubs fans after watching KB, Rizz, and Javy get traded this afternoon pic.twitter.com/KgJJkuB94X

Justin Fields represents the hope for a brighter tomorrow for the Bears like Anthony Rizzo, Javier Báez, and Kris Bryant once did for the Cubs. Should Fields match those heights, I hope there are negotiations in good faith to keep him around instead of empty promises. We’ve got a long way to go before we even get to that bridge, let alone cross it. But the journey Bears fans are set to embark on is similar to the one the Cubs went on way back in 2012. My best advice is to enjoy the ride while you’re on it, because it’s jarring once you have to leave the vehicle.

•   I want to breeze through Bullets today because I have a gaggle of things I want to get to this morning and afternoon. We can kick things off with some highlights:

•   Andy Dalton, Jimmy Graham, Khalil Mack, David Montgomery, Justin Fields, and Darnell Mooney are among the prominent players featured. I also see Thomas Ives (#19) and recent addition Jon’Vea Johnson hauling in some passes. Even backup kicker Brian Johnson got some burn in the highlight video. Brad Biggs (Tribune) points out Johnson went a perfect 9-for-9 in kicks, which I see as a sell-high opportunity for a kicking-starved team. If Johnson keeps it up, the Vikings will probably cough up a Day 2 draft pick to get this guy in camp.

•   It sure would be neat to see more defensive standout plays. Maybe the defense doesn’t need a sizzle reel this time of year, but they certainly are deserving of one with the body of work they’ve put together. With that being said, Adam Hoge (NBC Sports Chicago) writes the defense is dominating to this point. Just wait until they put on pads.

•   This might be the highest compliment Matt Nagy has paid out to Robert Quinn:

Matt Nagy on Robert Quinn–
"He’s rolling right now. I’ve gotta actually tell him to pull the heck back a little bit because he’s getting in that throwing lane with the quarterback, and we had a couple close ones yesterday. So if you see me freak out today, it’s because of that."

•   Quinn was dealing with some back issues at the outset of camp, which was troubling to digest after foot injuries were nagging last year. In the end, the hope here should be to stack good practices and go from that point forward.

•   If I didn’t know any better, I’d see this tweet and think Damien Williams is a mortal lock to play a role similar to that of Tarik Cohen:

RB Damien Williams is a skilled route runner. Just got behind Roquan Smith got a deep shot from Andy Dalton.

•   This isn’t to say Williams will usurp Cohen in the backfield. There is certainly room for both players. But while Cohen gets up to speed after missing all but three games due to an ACL injury, it’s nice to be able to turn to someone with William’s skills and experience. And, ultimately, you know you’ve done something right when you can beat Roquan Smith in coverage.

•   It sure would be awesome if the Bears could truly incorporate three tight ends throughout their offensive scheme. I imagine Justin Fields would love having those safety blankets around:

•   Nothing says football season is coming like a Packers fan with no mutuals getting up in their feelings (and my mentions) because of a tweet. It must’ve really hit close to home to get them so riled up.

•   A notable signing for the Bears’ Week 11 opponent:

Ravens have agreed to a 1-year deal with Justin Houston that will pay him a base salary of $1.075 million and also includes $1 million signing bonus, per source. Additional incentives in deal based on Pro Bowl and sacks.

•   This is cool and hope other teams follow this lead:

With fans in attendance at all 32 training camps today, the Colts, Patriots, Saints and Washington Football Team will be offering COVID-19 vaccinations at their sites.

•   All teams should make training camp a party:

In typical New Orleans fashion, fans are welcomed back for the second day in a row.

Take the UNDER on the win total. I don’t need to see one Football rep. This was enough. https://t.co/dJW2nsexKj

Vikings’ RB Dalvin Cook graduated today from Florida State. He didn’t walk to the podium to receive his Bachelors of Science in interdisciplinary studies/public policy due to training camp practice; instead Cook put on the gown at his Minnesota home to bask in his accomplishment. pic.twitter.com/myqiKlvskM

All right, my friends. It's the final stretch of the 2021 #BNBlogathon. It was 40 hours of baseball, caffeine, rumors, nacho cheese, trades, tears, and $21,000 in donations to Make-A-Wish. I appreciate your support so much! Off to sleep & dream of Game 7. https://t.co/GeLDX6YPen

•   Even after extending the qualifying offer, I have my doubts that Lauri Markkanen will return to the Bulls for the 2021-22 season: