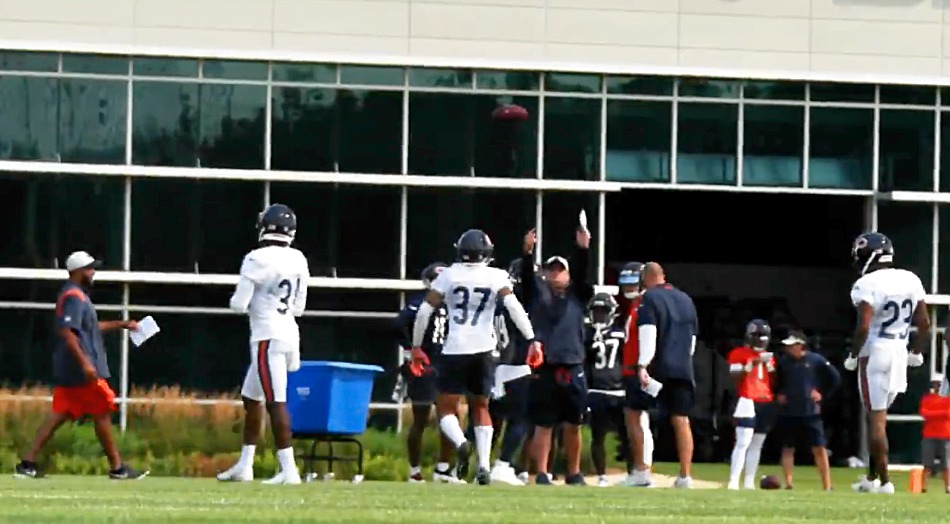 Like a child before Christmas, I found myself struggling to fall asleep last night knowing that I was going to today’s Bears training camp practice.

•   Every year, my friends ask me what I have eyes on at training camp. And every year, I try to direct them to posts like the one that will flow from my fingertips starting now. For starters, I’ll have eyes on the offensive line. Even when I was covering high school and college teams, battles in the trenches caught my eye. Real winning can happen at skill positions when guys at the line of scrimmage win battles. Offenses struggle when guys on the line can’t block. Defenses can’t stop anyone if those players up front can’t create a push. In a way, it’s beautiful that none of our favorite football highlights can happen without solid play up front.

•   Chicago projects to have a new starter at left tackle in Teven Jenkins, who was thought to make his camp debut on Monday. Jenkins was missing in the action due to some back tightness. Unfortunately, he’s out again today. Cody Whitehair was the team’s starting center last year, but should start at left guard in 2021. James Daniels, last year’s starting left guard, figures to slide over to the right side at guard. Germain Ifedi, who signed last year to be the Bears’ right guard before finishing the year at right tackle, is the team’s starting right tackle. This whole situation is like musical chairs, but with large humans.

•   On the other side of the line, Eddie Goldman is probably champing at the bit after sitting out last year. The Bears’ nose tackle admits regret over missing last season due to opting out because of concerns about the COVID-19 pandemic. But the Bears welcoming him back with open arms is putting him in a good place as he works back into shape. (Chicago Bears)

#Bears DT Bilal Nichols on his own expectations for 2021 after a strong season last year:

•   Nichols, 24, is in the final year of his rookie deal and is coming off his best year as a pro. The Delaware product put up career bests in sacks, tackles-for-loss, and QB Hits last year. He also came away with his first career interception while starting all 16 games. There was an obvious focus on extending Allen Robinson II this offseason. And we have begun peeking into how Roquan Smith’s next deal will look. But sometime in the near future, we should explore what it might cost to keep Nichols around.

•   As if the Bears defense needs more incentive to take the ball away. Here’s to toughening up Andy Dalton and Justin Fields by filling that thing up!

•   Something I’ll keep tabs on in the future are the names of the coaches brought on board as part of the Bill Walsh Diversity Coaching Fellowship. Brandon Gibson (Kentwood High School), Siriki Diabate (Middle Tennessee State), Jason Henshaw (University of Rochester) and Dialleo Burks (Callaway High School) join Matt Nagy’s staff. As do player personnel interns Rashad Rich (Saskatchewan Roughriders) and Ashton Washington (Texas Tech), who are joining the scouting side of things. Worth underscoring here is that Ashton Washington becomes the first woman to work in the Bears’ scouting department. Here’s to this hire opening the door for many others in the years to come.

•   One thing I admire about the hirings that have come under Matt Nagy is the diversity. For instance, new Defensive Coordinator Sean Desai is believed to be the first Indian-American to be a coordinator in the NFL. New RBs Coach Michael Pitre was on Andy Reid’s staff as a Bill Walsh Minority Fellowship in 2017 (where he crossed paths with Nagy when he was a Chiefs assistant). Henry Burris, a coaching in tern as part of the program in 2020, is now a Bears Quality Control Coach. Ronell Williams, another Walsh Fellowship intern from a prior coaching staff, is one of Chicago’s defensive Quality Control coaches. So, not only does Nagy bring guys in, he promotes them, too. The NFL has made pleas to increase minority hiring. And while we’re not where we should be, small steps of progress shouldn’t be ignored.

•   In the wake of the news of Kirk Cousins and two other QBs going on the COVID-19 list, the Vikings are resorting to trying out street free agents (TwinCities). And for what it’s worth, Head Coach Mike Zimmer sounds grumpy about the whole situation:

Mike Zimmer on players out due to protocol, "I can't talk anymore about that because of new protocols."

"It's why people should get vaccinated"

"Something like this happens the day before a game with a chance to get into the playoffs?"

"Some people don't understand, I guess."

More Zimmer: "Jake Browning is vaccinated. That helps to be the backup.

"It's important to be available when you're playing football – a team sport."

Many reacting to this may not understand that – regardless of anybody's personal stance on vaccination – NFL protocols dictate unvaxxed players sit out longer than vaxxed players in the event of high-risk contact / positive tests.

It's about how they have to handle players.

'I’m immune deficient. With this new variant, who knows?’ — Ron Rivera, Washington Football Team head coach and a cancer survivor, spoke about the vaccine hesitancy among some of his players pic.twitter.com/4Tc6HAGALC

Ron Rivera opens up more about his cancer battle last year and the lack of vaccines for his players now: "I'm truly frustrated, I'm beyond frustrated. I'm immune deficient, and with this new variant, who knows."

Ron Rivera is "perplexed, truly frustrated, beyond frustrated" that so many of his players remain unvaccinated. He pointed out that his cancer treatment last year has left him immune deficient, requiring him to put masks on in almost all gatherings with players.

•   Former Bears tight end Adam Shaheen was among those who were put on the Dolphins’ Reserve/COVID-19 list. Three tight ends in total found their way as close contacts to TEs Coach George Godsey, a vaccinated coach, who tested positive for COVID-19 and sent home. As a reminder, players who are unvaccinated have to deal with more stringent protocols than their vaccinated teammates. The Dolphins have four other tight ends in camp, and they’ll be in a position to make the most of whatever reps they get in lieu of the top guys being unavailable.

•   Also worth sharing, as a reminder, that getting vaccinated makes you less likely to contract it. And in the case a vaccinated person does get it, the symptoms tend to be less severe. Perhaps most importantly, vaccinated people are less likely to die because of it. Shaheen’s decision is what it is. To each their own. But from a purely football standpoint, there are more pros than cons to getting poked.

•   Meanwhile, over in Hawkeytown, the Blackhawks have their goalie:

If you missed it, Fleury is gonna stick. https://t.co/w9sC3ZI1tk

Not that we didn't know that draft bonus pools exist to artificially depress signing bonuses, but hey, just to confirm. https://t.co/sDUnCKmJM9