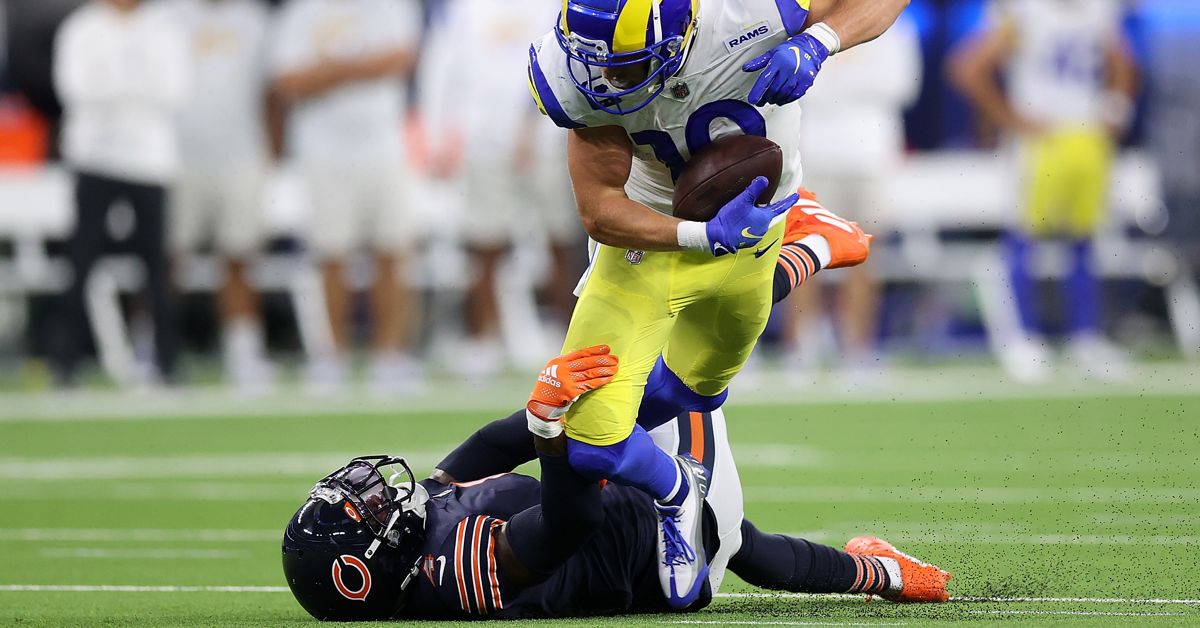 I’m in something of a cooking slump, as the food I’ve been cooking has been teetering on “good, but not great” for a few weeks now. If anyone has advice on what I could make to break out of a funk, I’m all ears.

•   Justin Fields is set to be the next Bears signal caller to try and become an honest-to-goodness franchise quarterback. But in the meantime, the Bears’ offensive identity should be rooted in whatever David Montgomery does moving forward. The evidence continues to pile up:

Scoring a TD when literally no one blocks>>>

#Bears RB David Montgomery led the NFL with 5.1 yards after contact per rush in Week 1. Only one other player had more than 2.8.

•   If Head Coach Matt Nagy can’t build his offense around Montgomery for the time being, then the Bears’ other identity will show itself. The one rooted in the missteps of GM Ryan Pace and everyone who had a hand in building whatever this Chicago football thing happens to be. More on that later.

•   Defense has been the primary identity of Bears football for as long as I remember. So it should come as no surprise that, after Sunday’s showing, the team hosted a handful of DBs for tryouts. No one should be subject to watching receivers flame Chicago’s corners and safeties like that ever again. And while there aren’t brand names coming in for workouts, PFF’s Brad Spielberger highlights D.J. Hayden’s recent excellence as a slot corner for the Jaguars. Grades of 74.8 in 2018 (10 games) and 76.9 in 2019 (15 games) suggests a basic level of competence that would represent an upgrade over what we saw on SNF.

•   Sure, I can appreciate Tashaun Gipson Sr. taking responsibility for that blown coverage gaffe:

“Too much football IQ between Eddie (Jackson) and me to let that happen. It won’t happen again as long as I’m employed by the National Football League. … It was a brain fart on the secondary, myself included. I take ownership on that play. We all got to be on the same page.”

•   But as Gipson says, there is too much football experience and intelligence for that to happen in the first place. Brain farts happen from time to time. Pobody’s nerfect, am I right? But for it to happen on L.A.’s second offensive play on opening night is simply unacceptable. It’s great that players understand that, but let’s not ever allow it to happen again. OK?

•   I’ve seen Richard Sherman’s name pop up in replies and comments discussing the Bears’ cornerback issues. And understandably so. Sherman has a winning résumé and showed he can still lock it down in the secondary. But if you’ll recall, Sherman was arrested after an in July and pleaded not guilty to five misdemeanors he was charged with. Most importantly, Sherman has spoken about the importance of mental health and vows to get the help he needs. So, yeah, I’d be into Richard Sherman as a Bears cornerback. But until he is mentally in a place to play, I think he is better off sitting out until he is ready to roll..

•   It’s not pretty (because the game itself was ugly) but Adam Hoge’s Week 1 film breakdown is full of nuggets, tidbits, and treats. Give yourself some time to browse through it.

•   A good thread to work through as we turn the corner to Week 2:

Some #Bears postgame thoughts as I've had my second watch through, and time to marinate on what I've seen without flying off the handle during the moment or morning directly after. A thread: pic.twitter.com/1ha64w47IN

•   Yeah, this will win you NFC Offensive Player of the Week honors:

The guys are back to breakdown:

•   Raheem Mostert, the 49ers running back who you most likely remember for shredding the Packers in the NFC Championship Game two years ago, is undergoing surgery after suffering a season ending surgery in Week 1. It’ll be interesting to see what the Niners look like when the Bears host them in Week 8 on Oct. 31. But it’s a bummer that San Fran won’t be at full strength.

•   Neato. Viewership for ESPN’s MNF Megacast was up 42 percent from Week 1 last year and 17 percent from 2019, per Barrett Sports Media. The ManningCast saw just 800,000 viewers tune in, but it had some real social media buzz during (and after) the game. But with Aaron Rodgers and the Packers set to take on the Lions next week, I expect those numbers to get a bump.

•   Here is a media trend I don’t like: PFT’s Mike Florio shares the NFL is making conference calls with reporters who cover opposing teams non-mandatory. It’s not as if coaches are revealing trade secrets during these calls. But there have been fun angles and anecdotes that have come from these conversations, and I hate that many will go away. Ideally, the league’s traditional media members will lean on the powers that be and make this situation right.

•   I don’t care that I’ve lost count of Josh Gordon comeback stories, because I’m still rooting for a storybook ending:

NFLPA determined Josh Gordon has successfully completed his NFL-monitored treatment program and has recommended to the NFL that he be reinstated, per sources. Gordon is awaiting final approval from NFL Commissioner Roger Goodell, but he is said to be ready to play and vaccinated.

Here is the breakdown of the positive test results from the Saints organization, per source:

All fans over 12 must be vaccinated to attend Bills games. https://t.co/4KglO76kIx

If you missed the absurdity last night, Brennen Davis homered in HIS FIRST TWO Triple-A at bats. Because he's that ridiculous. https://t.co/3XVHWg9Fzb

•   The Rockets have cornered the market on trade watch drama:

The Rockets Have Reportedly Agreed to Sit John Wall Until They Find Him a New Teamhttps://t.co/kYWpOBBcHx

Hey folks! We have a new writer at BN who is going to be helping us out on a variety of things, @PatrickKFlowers. Good dude, hardcore Chicago sports fan – give him a follow!