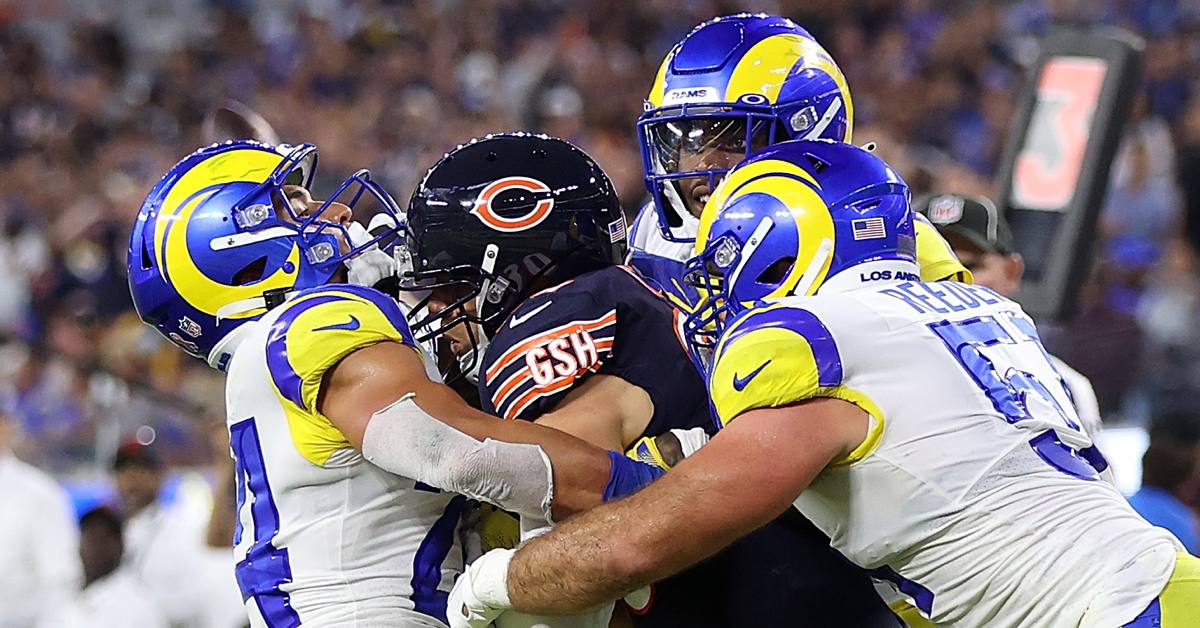 On Sunday, the Bears tight ends were practically non-existent, with just one total target between the two main guys (congrats, Cole Kmet!) in the team’s 20-17 win against the Bengals at Soldier Field.

Even the guy making the calls, Matt Nagy, admitted that there were “not enough targets” to either player on Sunday. And he went on to add that they “need to be more involved” moving forward. Which, yeah, no kidding.

But as Luis pointed out yesterday, this pathetic display in the run-blocking game by *BOTH* Kmet and Jimmy Graham makes you wonder why we should care about the targets they’re (not) getting in the first place:

That was ugly on both counts, and cost the Bears six points.

But let’s zero in on Graham. Not necessarily about simply how poorly he’s been playing, or the fact that the Bears pretty much threw $7 million in cap space out the window by keeping him around. But instead on how Nagy can salvage some return on that investment the rest of the way. Specifically, where Graham could be made of good use since he isn’t going anywhere: Red-zone passing plays.

If there’s one thing that Jimmy Graham has always done very well (and can likely still do to some extent), it’s haul in red-zone targets. Sounds familiar, doesn’t it? If Nagy can dial up plays for the veteran tight end where he’s had most of the success in his career, the Bears might be able to extract some real value out of that $7 million cap hit that Graham comes with this season (and, more importantly, make good on the opportunity cost of those dollars). And for what it’s worth, Nagy did exactly this last year. So there is some precedent should Nagy choose to reach back to the not-too-distant past.

In 2020, Graham posted a 77.4 catch percentage on red-zone targets that came his way. He made the most of that red-zone usage, as seven of Graham’s eight touchdowns came inside the area. Additionally, Graham’s seven red-zone touchdown catches were tied for the top spot among tight ends in the NFL with Jonnu Smith (three more than any other tight end). To take that one step further, Graham caught nine passes on plays that originated inside the 10-yard-line last season. That was good for fourth-best among all pass-catchers in the NFL, with six of his eight touchdowns coming on those catches. Moreover, Graham’s six touchdowns on targets from inside the 10-yard-line were tied for the third-most (with Tyreek Hill) in the NFL behind Adam Theilen (10) and Davante Adams (13).

See what we’re getting at here?

If not, check this out. Through two weeks, Graham’s 52.5 offensive grade ranks 50th out of 63 eligible tight ends on Pro Football Focus. Additionally, Graham’s run-blocking grade (36.9) looks as bad as the play in Luis’ thread. Despite a terrible first two games, to say that Graham is washed and can’t be a factor in this offense would be unfair given his 2020 performance. There is value there, but only with proper usage.

Remember, he was targeted 72 times, catching 50 passes for 456 yards and eight touchdowns with 9.1 yards per reception. Those eight touchdowns in six games helped push the Bears to a 5-1 record when Graham caught a touchdown pass. Oh, and Graham registered just one drop all season. Again, there is a right way for Nagy to use Graham that would get the most out of GM Ryan Pace’s expenditure.

That’s not what ideal usage for Graham looks like at this stage of his career.

The Bears have a perfect opportunity to test this theory this Sunday against the Cleveland Browns for what it’s worth. The Browns rank 20th in the opponent’s red-zone scoring percentage (71.4%) and allowed Chiefs’ tight end Travis Kelce to catch two touchdown passes from inside the red-zone in Week 1, including the game-winning touchdown for Kansas City (no, Graham is *nowhere near* Kelce’s talent at this point in his career, but still).