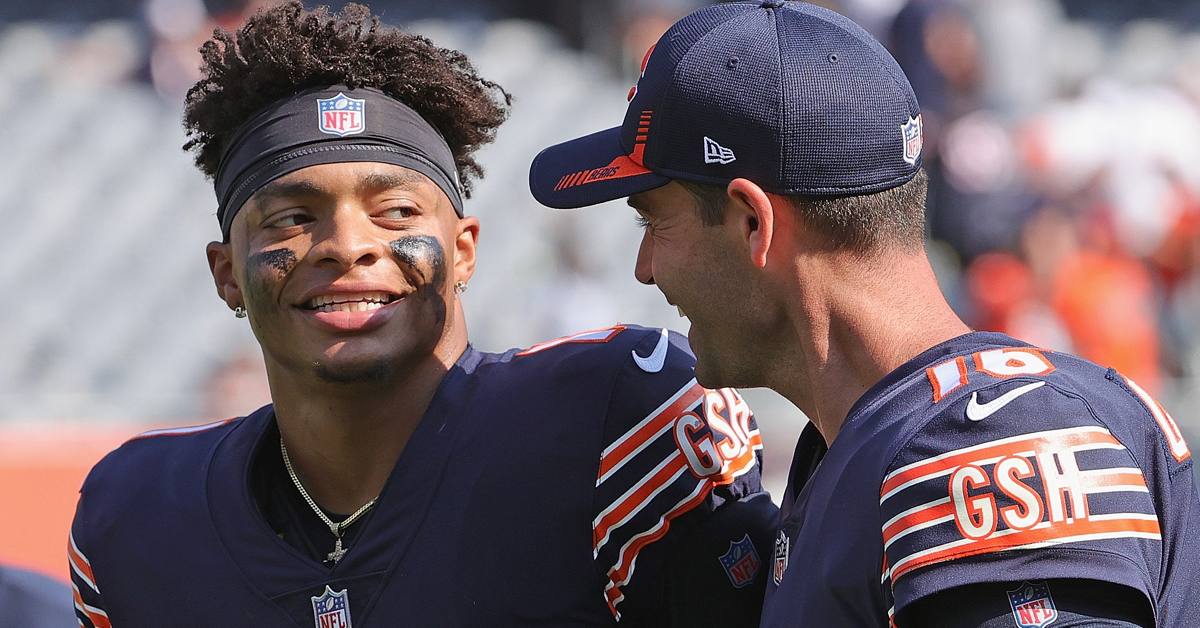 How are the Panthers so good at this social media thing?

Much respect. I’m now a little more inspired today to step my game up.

•   The fantasy football community is already heart-eyes over Fields starting:

Quarterbacks I'd start over Justin Fields in fantasy football land:

•   As a reminder, fantasy and reality don’t necessarily go hand-in-hand. However, I can understand why there is love for Fields from a fantasy perspective. Because in addition to arm talent and the potential to throw a ton based on (1) Matt Nagy’s throw-happy tendencies, (2) the potential for game score situations to dictate the Bears’ need to throw a ton, and (3) Fields’ mobility bringing potential ground yardage and scores is enough to give fantasy owners hope. I was able to draft Fields in one league, but it is one in which I own Kyler Murray. So much conflict. What should I do?

•   A worthwhile thread to peruse:

Justin Fields will finally be starting!

When we adjust for surroundings, Justin Fields has the highest CFB Passing grade of all rookie starters and is projected to have the strongest season of his class in WAR/Snap

I feel obligated to point out the projections for rookie year success (as measured by WAR/Snap) is very, very poorly calibrated and the actual number here doesn't mean much. But we very roughly expect Justin Fields to edge out Jones/Wilson/Lawrencehttps://t.co/OSUwb69eaJ pic.twitter.com/G4K3BXadUs

•   The online reactions to news Fields was getting the starting role were elite across the board:

#Bears fans reaction when they found out Justin Fields is making his 1st #NFL start on Sunday in The Land… 🐻⬇️ pic.twitter.com/VRr6V3srpm

ITS UP FROM HERE💯🤙🏾🐻 https://t.co/jGctlkUXwl

I am ready to be hurt again https://t.co/MXvqYOfJp3

•   It’ll never get old that there really is a Star Wars meme for EVERYTHING:

•   You know who else will be watching Fields’ career with great interest? Cole Kmet. The second-year tight end could possibly flourish with Fields tossing him the pigskin. Especially if this comes to fruition:

Bears TE Cole Kmet: "With Justin, there's the play that's called and then there's the second play, which turns into backyard football. I'll definitely be getting some extra sprints in this week.

•   The Bears’ offense playing backyard football might be an upgrade from what we have seen in recent years. There hasn’t been enough creativity from Matt Nagy’s offense. We can cast blame in so many different directions, but there is no point in doing that at this stage of the game. Moving forward, it would be nice to see Nagy’s offense excel with his hand-picked QB. Don’t get me wrong. This will be one of those “Rome wasn’t built in a day” situations. But if the Bears show a hint of progress offensively because of what Fields brings to the table, I’ll feel better about this group on Monday than I did coming into the week.

•   Other things we’ll watch with great interest — OBJ’s status on the injury report after being a full-go:

•   Bears-Browns is an intriguing matchup beyond the obvious reasons. If a Bengals offense fueled by the upside of Joe Burrow, Joe Mixon, Ja’Marr Chase, Tee Higgins, and Tyler Boyd was a litmus test for the Bears’ defense, then facing a Browns squad led by Baker Mayfield, Nick Chubb, Kareem Hunt, and Odell Beckham Jr. will be a full-blown exam. Because in addition to firepower at skill positions, the Browns are a more well-rounded squad with a better line and set of defenders that really brings this group together. PFF ranks Cleveland’s offense as the third-best in football, writing glowingly about the group:

Quarterback Baker Mayfield has been on the verge of spectacular, averaging 10.9 yards per attempt, but three turnover-worthy plays have undermined a lot of that good. Mayfield has an 85.4% adjusted completion rate, the second-best mark in the NFL, and the Browns are one of the few NFL teams with a genuinely efficient run game, ranking first in expected points added per play on the ground.

•   Teaming an accurate passing game with an efficient ground attack seems like a good blueprint to follow.

•   As for the rest of the defense, I’ll say this: Put forth a healthy Robert Quinn — who already has more sacks in 2021 than he did in all of 2020, creatively use Khalil Mack, allow Akiem Hicks and Bilal Nichols to wreck stuff up front, let Roquan Smith roam the middle of the field, watch Jaylon Johnson and Eddie Jackson rock the secondary, and see where the chips fall at the end of this day. Realistically, we know this “D” has issues. But if the stars play like stars, it will help counter some unpleasantries elsewhere in the lineup.

•   In an alternate universe, maybe we’re discussing a Colts-Bears trade involving Nick Foles. But with no other quarterbacks on the roster, Foles will serve as QB2 behind Fields and not as Carson Wentz’s possible replacement if his ankles don’t give him a chance to be a full go. So instead, we’re looking at practice squad QB Brett Hundley taking starter reps via NFL Network insider Tom Pelissero.

•   The hits keep coming, and they don’t stop coming: