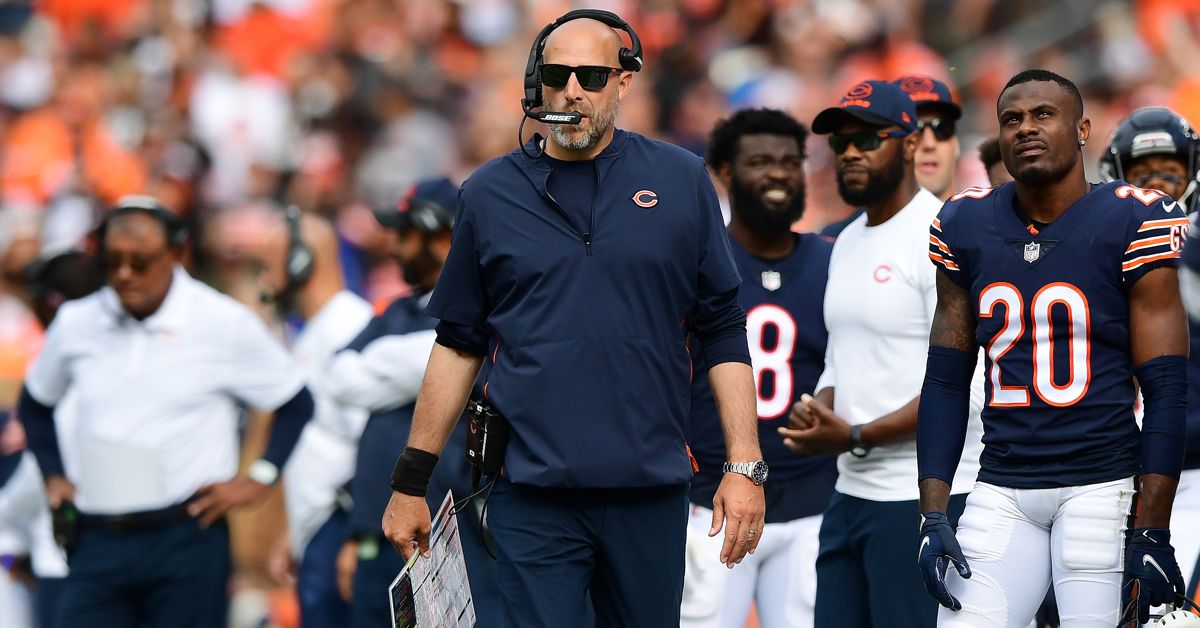 Sunday wasn’t a total loss. My fantasy baseball team, you know – the one I’m always obsessing over at the top of Bullets, came through with a strong finish en route to winning the championship. That’s back-to-back titles for the Trader Lu franchise. Talk about a weekend saver!

•   Sunday’s 10 hours of football were way too familiar for Bears fans over the years. At noon, we gather to watch our favorite team’s offense go nowhere fast, sit helplessly as a defense that can’t do it all try (once again) to do more than its share of the heavy lifting, and all in a loss. And at night, we watch our long-time arch rival snatch victory from the jaws of defeat in prime-time. Watching Aaron Rodgers gut opponents is old hat for us around here. But yesterday’s exploits was like getting a cold bucket of water dumped on your head when you’re already under a wet blanket.

• Here’s Sunday’s pain in a nutshell: The Packers gained almost as many yards (42) on their game-winning drive against the 49ers as the Bears did in their entire game against the Browns (47). Justin Tucker’s game-winning field goal for the Ravens against the Lions (more on that later) went for more yards (66) than the the Bears’ offense did. I had hope for Justin Fields in his debut. And there are still tangible reasons to believe in his future. But the rookie quarterback received no favors from a fourth-year head coach. And that’s a problem.

"We liken Justin Fields to a batch of brownies… I pulled out the brownies yesterday, and it was full on batter."

—@heykayadams on whether Justin Fields is ready for the #NFL pic.twitter.com/nnXAljZ6YE

•   If whoever is in your kitchen doesn’t know what to do with the ingredients given to them, or doesn’t understand how the process works, you’ll end up with an unsatisfying meal. And that’s what yesterday was for Chicago’s football team. That whole thing — game-plan, execution, all of it — was kin to watching someone throw a bunch of things in a pan and hoping something delicious comes out. All while not knowing how the ingredients worked in tandem or what to do in the kitchen. Sure, maybe the chef had seen their former head chef do it a bunch of times in the past. But they sure aren’t acting like they have an idea of what to do in the kitchen.

•   A common thread tying everything together after Sunday’s Bears loss was the internet’s collective yelling at Bears Head Coach Matt Nagy. Was it rage-filled? In some corners, yes. Was it cathartic? I’d bet it was for a great many folks. Ultimately, it was a high volume effort with a lot of shots hitting the mark.

•   It came from former players such as Olin Kreutz and Alex Brown on NBC Sports Chicago’s “Football Aftershow” program. Kreutz hits it on the head when he says: “(Nagy) keeps talking about the ‘why’s,’ ‘we’ve got to find the why’s.’ Put a big mirror in your office, put ‘why’ over it, stand in front of the mirror. You found it, OK?” Brown was more to the point: “You’re supposed to be the offensive guru. Since you’ve been here, it’s been pathetic.”

•   While it is one thing to see former players get their digs in, it’s never good when active players are also driving it home:

•   For Nick Foles, it isn’t the first time this kind of thing popped up. Remember the anecdote on Monday Night Football about how Nagy didn’t have a good feel about how much time his quarterbacks had to execute the play calls he was handing down? Whatever it was, it rang true then and still seems to ring true now. As does last year’s commentary from Foles about the Bears not having an offensive identity. Well, at least one that wasn’t as shameful as one that comes with a 1.1 yards per play average. Foles also said some things earlier in the offseason that are easy to construe as Nagy being problematic for this team. Again, that’s not an encouraging sign.

•   I know better than to read too much into someone’s tweets, retweets, and Twitter likes. But this Jimmy Graham tweet speaks volumes:

You don’t love it when a Hall of Fame bound TE retweets this… pic.twitter.com/LsZPZ9j9R8

•   Through three games, Graham has 3 targets, 1 catch, and 11 receiving yards. Extrapolate those numbers over a full 17-game season (gotta get used to that at some point) and it comes out to 17 targets, 5 catches, and 62 yards. So … what’s worse between having a tight end producing nothing while on a 24 percent offensive snap share or paying that tight end (and then kicking more money into next year and chewing further into future salary cap space)? I’m sincerely asking because I, myself, don’t know if I can pick one over the other.

•   When your opponents are telling you that your offense makes it easy for the defense, you’re doing something wrong:

Mike Florio relayed this conversation he had with the Browns' Myles Garrett on NBC last night– pic.twitter.com/afV6iM6lxX

•   In the interest of fairness, Nagy isn’t the only one being dragged in the wake of the Bears’ loss:

The indictment of Bears leadership couldn’t be clearer.

That’s not an offensive performance a coach in his fourth year turns in.

This isn’t an acceptable roster for a GM in his seventh.

Bears have to effectively get the entire OL sorted, and outside of Darnell Mooney have zero wide receivers under contract for 2022, with Justin Fields’ rookie contract window already wasted for a year

The #Bears tried to fix their OL by re-signing Germain Ifedi, drafting a OT with back problems, drafting another OL in the fifth round and then signing a 39-year old veteran.

•   There is a case to be made that it was Drew Brees delivering the most damning blow:

Here’s what Drew Brees said about the Bears on @SNFonNBC pic.twitter.com/8xhInpEo6c

•   In addition to having a Hall-of-Fame caliber résumé, Brees is the gold standard of quarterbacking by whom Bears GM Ryan Pace grades his signal callers. In other words, the QB Pace arguably respects the most just dumped on his head coach. Sheesh.

•   Nagy’s offensive game-plan was so bad, some NFL analysts thought it was a hit job coming from inside the house:

I do not believe that Matt Nagy wanted Justin Fields to be his quarterback. Ever. From the start. I don't care what he says. Coaches will tell you what they really think of their players by how those players are deployed on the field.

Move on from Nagy right now. This is embarrassing and it feels purposeful

Scrolling through box scores and saw this gem.

Mitch Trubisky had the same net passing yardage as the Bears did today. pic.twitter.com/Ucnigx8fQC

•   I’m not even sure how to mathematically grasp this:

The Bears earned *checks notes* -1400% of their yards on play action passes. pic.twitter.com/ipnenobVbk

•   At least the Bears didn’t suffer the most heart-breaking loss on Sunday?

This is such a terrific, professional call by @DanMillerFox2. Crushing moment but he still nailed it. A lot of announcers would’ve gone dead air for a bit. https://t.co/twHgvoRAuj

From @GMFB: #Chiefs coach Andy Reid is in stable condition after being taken to the hospital as precaution last night. pic.twitter.com/Q0I4grVets