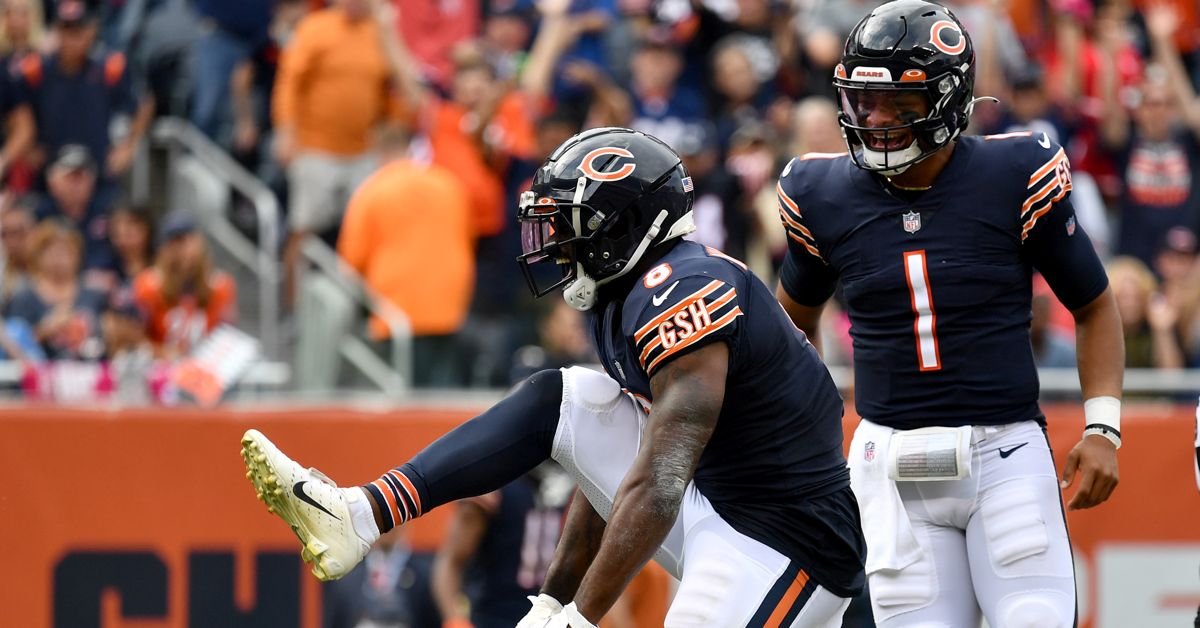 This feels a little pot-calling-the-kettle-black seeing that it’s coming from someone who can be oblivious to hints and clues from time to time. But it still needs to be said.

Whatever it was that was done today needs to be done moving forward. Because that is what we were expecting this offense to look like in Year 4. Chunk plays. Yards. Deep shots. Chain-moving throws. Pile-moving rushes. There was glimpses of all of it in the Chicago Bears’ 24-14 win against the Detroit Lions. Take a hint. Enjoy the moment. And get back at it on Monday.

But first, highlights. And plenty of them.

•   Justin Fields’ numbers were modest, completing 11 of 17 passes for 209 yards. He threw more interceptions (1) than touchdowns (0), but that was a result of a tipped pass and we won’t point fingers at a fluke play and call it some gotcha! moment. The more important thing Fields did was move the ball vertically. Observe:

•   I fully expect more plays like this moving forward. And if they aren’t drawn up, then something is terribly broken with the offensive play-calling mechanism.

•   All in all, we’re talking about an offense that put up 373 total yards, was averaging 6.5 yards per play, and found the end zone on three of four red-zone trips. At the risk of blurring the lines of competence and excellence, Bears fans want to see more of what we saw at Soldier Field. Sure, it would be nice to do it against a team that isn’t the Lions. But doing it against Detroit is a step in the right direction.

•   There are mixed feelings on how the Bears defense performed on Sunday. On the one hand, the numbers look nice. Just 14 points allowed on an afternoon in which the “D” came up with four sacks, seven QB hits, six tackles-for-loss, and two fumble recoveries. This is what we come to expect from watching the Lions:

OPE! Let me just squeeze by and take that from ya! pic.twitter.com/T3uKwbcZ4X

•   But the Jared Goff threw for 299 yards (on 38 attempts, mind you), finished with a 105.0 passer rating for his efforts. Detroit scored one touchdown in its five trips to the red zone. The Lions left a lot of points on the board, and left me glad their coach didn’t choose to take points when opportunities were given. Maybe Dan Campbell should’ve thought of that while taking time from his busy week to prepare for Nick Foles.

•   We’ll need to keep an eye on the injury report like it’s nobody’s business this week. The Bears lost two running backs due to injury, with David Montgomery (knee) and Damien Williams (quad) not being able to finish this one. Brad Biggs (Tribune) reports Head Coach Matt Nagy didn’t offer updates on either player’s status.

•   This is one of those situations where we won’t know anything until tests are done. But I’ll gladly take optimism from the locker room while I can get it. And I bet the Bears would, too.

•   On there other side of the ball, Akiem Hicks’ groin injury that had him questionable to return earlier in the game ultimately kept him out of action. We saw players like Khyiris Tonga and Trevis Gipson get some more burn than normal, which speaks to this defense’s depth. But we wish a speedy recovery to the heart of that defensive line.

In the end, we saw a snapshot of what the Bears should be looking like in 2021. Take a hint. Try it again. Heck, try it until the wheels fall off. Because it can’t get any worse than what we saw in Cleveland. Who knows? Maybe this is the start of something wonderful. This was Justin Fields’ first win, and to do it at Soldier Field was pure magic. Here’s to it being the first of many.