So What Do the Bears Playoff Odds Look Like After Four Weeks? Eh ... Not So Great Skip to content

The Bears are currently in the enjoyable segment of the Matt Nagy spin cycle of emotions that we’ve been riding for the past three-plus years. It looks something like this: 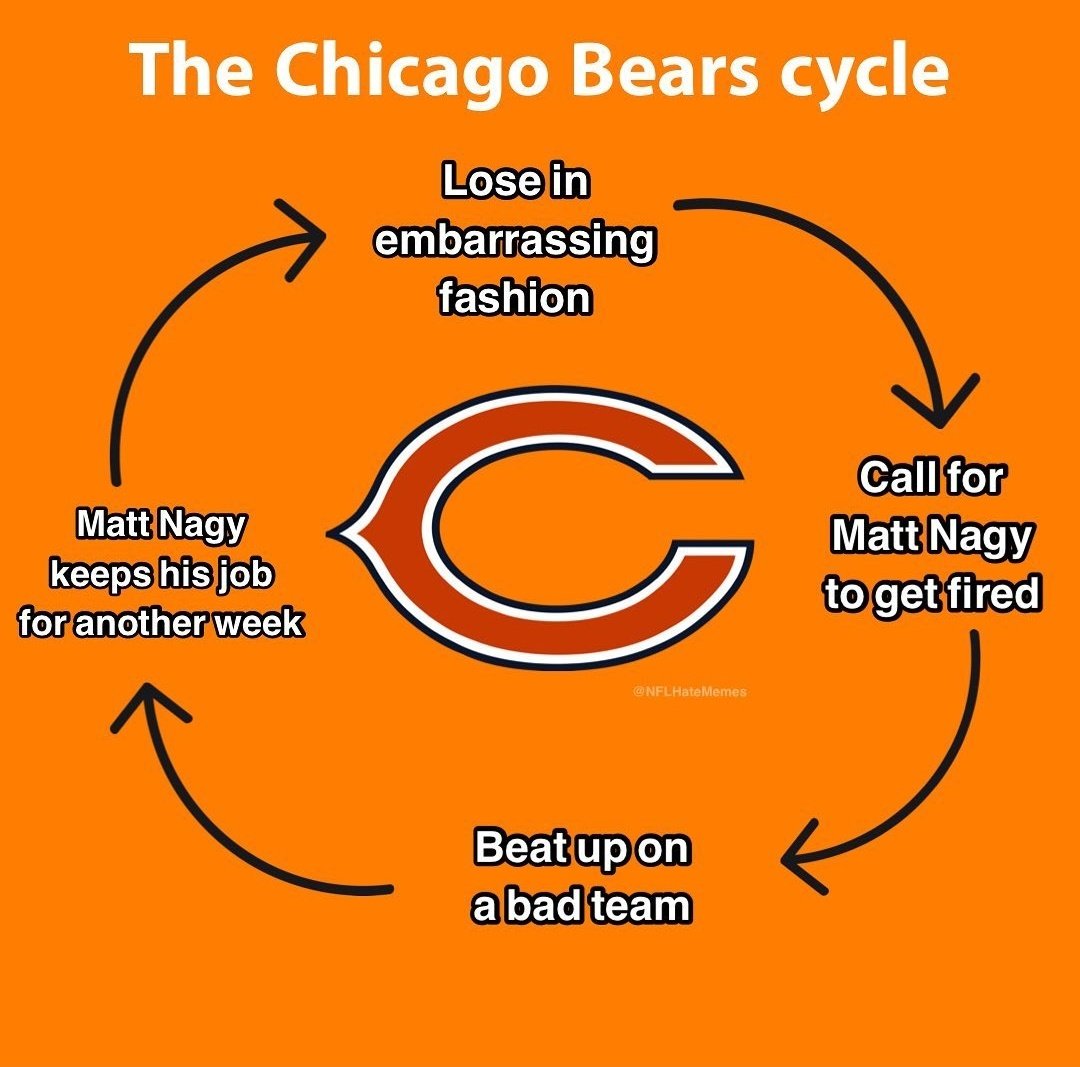 So, with that being said (I know everyone is channeling their inner Jim Mora), we’re going to take a very early look at some playoffs odds.

I don’t personally believe that the Bears are a playoff team right now, but this is probably a good point for this check-in, considering that the next month of games might have the Bears looking at a 2-7 or 3-6 record heading into their Week 10 bye.

Football Outsiders playoff odds are pretty straightforward. The report plays out the season 50,000 times. Then, a random draw assigns each team a win or loss for each game. The probability that a team will be given a win is based on an equation that considers the DAVE ratings of the two teams and home-field advantage. (DVOA and DAVE ratings are explained here.)

The Bears got a bump in their odds (+5.8%) after the victory over the Lions on Sunday. Here’s where Football Outsiders has their chances after four weeks:

The Bears’ 0.2% chance at winning the Super Bowl is tied with the Steelers and Dolphins for the 25th “best” odds in the league. At least it’s better than the Lions, right?

FiveThirtyEight, like Football Outsiders, uses a pretty straightforward simulations system with just some subtle differences. Here’s how they explain the methods:

“This forecast is based on 50,000 simulations of the season and updates after every game. Our traditional model uses Elo ratings (a measure of strength based on head-to-head results and quality of opponent) to calculate teams’ chances of winning their regular-season games and advancing to and through the playoffs. Our quarterback-adjusted Elo model incorporates news reports to project likely starters for every upcoming game and uses our quarterback Elo ratings to adjust win probabilities for those games. A team’s current quarterback adjustment is based on its likely starter in its next game and how much better or worse that QB is than the team’s top starter.”

The first number will represent the standard simulation, and the number that follows in parenthesis will be with the quarterback-adjusted Elo model.

FiveThirtyEight’s model likes the Bears a bit more than Football Outsiders does, but not by much.

On both platforms, the Bears are in the bottom third of the league when it comes to the playoffs and Super Bowl odds, even despite their current 2-2 record. These seem pretty spot-on at this point for two key reasons. First, for as good as Justin Fields looked on Sunday, Matt Nagy refused to budge from his claim that Andy Dalton is the starting quarterback when he’s healthy. So, we have no idea what Nagy is doing with the QB situation, which makes forecasting things 15 weeks out a tad bit difficult.

Then there’s the difficulty of their schedule for the next five weeks.

Now, the Steelers have been struggling as of late, and that might be the most winnable game of the stretch leading into the bye week. If they end up 3-6 or 2-7 on the other side of Week 10, they’ll be dead in the water when it comes to playoff aspirations.