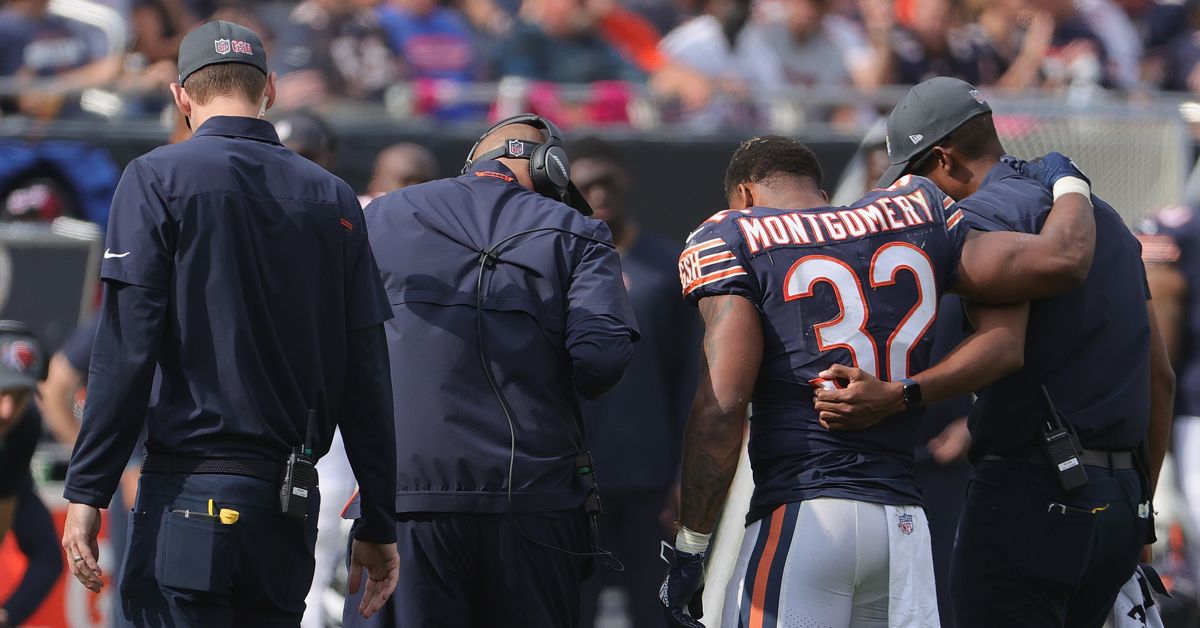 Early testing reportedly revealed Bears running back David Montgomery avoided a serious, season-ending knee injury. And while that was a bit of unexpected good news, we knew the other shoe would fall after further testing.

Unfortunately, the Bears’ top running back will miss a chunk of time in the middle of the season (a very tough stretch of games, no less):

Per source, tests showed Bears RB David Montgomery has a knee sprain that’s expected to keep him out 4-5 weeks. Not season-ending, but Bears will be without their starting RB for a while.

ESPN’s Dan Graziano reports Montgomery’s injury is a knee sprain that could have the Bears’ top rusher out 4-5 weeks. Again, the good news is that it isn’t a season-ending injury. But still … being without Montgomery for an extended amount of time is a real bummer.

Montgomery, 24, was chugging along with a nice season. The Iowa State product had 69 carries, 309 rushing yards, and 3 ground scores through four games. That early season burst had him as the NFL’s fifth-leading rusher and put him on pace for a 1,300-yard rushing season and a career-most 294 carries. So, yeah, the Bears will truly miss Montgomery’s presence while he is gone. Not only was he their best ball-carrier, Montgomery was essentially the driving force behind the offense’s good times.

If the timetable for a return is accurate, Montgomery could realistically be back after the team’s Week 10 bye week. That would put him back in the lineup by Chicago’s Week 11 home game against Baltimore. Missing the Raiders, Packers, Bucs, Niners, and Steelers games will sting. However, a return for the back half of the schedule is better than no return at all. Silver linings being what they are and such.

In the meantime, this lines up for Damien Williams to jump into the starting lineup. Even though he was dealing with a thigh bruise, it sounds like Williams will be OK to go. Rookie Khalil Herbert slides up into an RB2 role in addition to his kick return duties. Look for Ryan Nall to get the call from the practice squad to round out the room. But don’t look to Tarik Cohen for help for the time being. Cohen is still on IR and was expected to miss the first six weeks of the season.